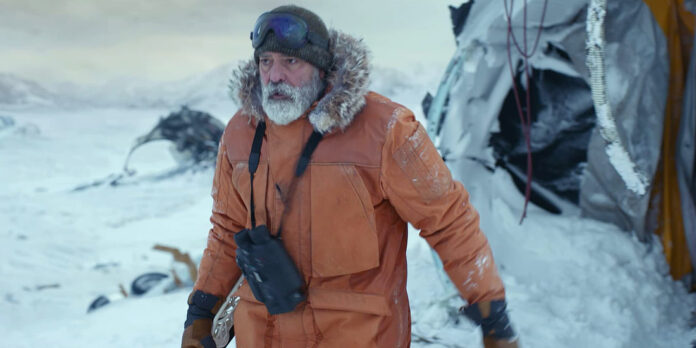 THE STORY – A lone scientist in the Arctic races to contact a crew of astronauts returning home to a mysterious global catastrophe.

While this year has certainly had many challenging events, it still must be noted that there are plenty of new films being released that can be enjoyed. It’s very comforting to see such interesting stories be shown in these new surroundings we all find ourselves in. However, even with the opportunities to access these movies, the massive studio spectacle has been notably absent. The thrill one would receive from checking out the latest big-budget pageantry feels entirely elusive this year as most of those examples have shuffled further down the calendar. It would seem that “The Midnight Sky” is stepping in to fill the void. It offers a grand display of craft that, unfortunately, is there to mask a very hollow core.

Set in the year 2049, the story finds the Earth uninhabitable after a global catastrophe has rendered the air toxic and the conditions harsh. Augustine (George Clooney) is one of the remaining souls left on the surface and lives out his days in isolation. That mundanity is interrupted by two major developments. One is the discovery of a girl left at his facility after the evacuation. The other is the attempts to intercept the crew of a returning space vessel that is unaware of the apocalyptic environment. This sets in motion a perilous journey Augustine and the child must face to save what little bit of humanity there is left to salvage.

When it comes to the duties that Clooney takes on with this film, there is much more admiration for his performance than necessarily his direction. He manages to have a captivating screen presence in a portrayal that feels grounded and authentic. There’s a weariness and exhaustion he carries that is quite effective, and he ends up being the best out of the cast. His skills as an actor are entirely at odds with his abilities as a director, which are wildly inconsistent in how to make the material engaging. One is appreciative of the ways in which the glossy sets, impressive effects and luscious Alexandre Desplat score are showcased. However, the pacing often drags and the action sequences can feel lethargic. It’s an assembly that tries to balance many tones that ends up crashing into each other with no unifying cohesion.

Clooney’s direction also does no favors in elevating Mark L. Smith’s screenplay, in which stale dialogue and shallow characters are on display at every opportunity. The narrative is also bifurcated between the storylines on Earth and the spacecraft, and this juxtaposition is never a natural match. It does not help that so much of the themes explored are traded on cheap sentimentality and predictable story beats. The entire emotional through-line is forced and somewhat trite, which also finds some truly eye-rolling developments near the film’s conclusion. Despite intriguing concepts concerning stranded humans battling the elements to survive in an empty world, none of these explorations are given enough nuance to make them feel innovative. The story is a fragmented collage of recognizable tropes that are not creatively executed.

As mentioned previously, Clooney is the best part of this ensemble of capable and talented actors who, unfortunately, are not given many opportunities to shine. Amongst the space crew, Felicity Jones does the best she can in a role that comes close to delivering a genuine emotional connection, though most of that is through her natural and inviting screen presence. She makes the most significant impression, even when sharing the screen with the likes of David Oyelowo, Kyle Chandler and Demián Bachir. One feels the most sympathy for Tiffany Boone in an utterly disposable role and little Caoilinn Springall gets by on some warm interactions but very little else. Most of the cast is nowhere near as distracting as Ethan Peck playing a younger Augustine, in which the voice alteration to make him sound like Clooney himself is one of the most damaging elements to the film.

One can undoubtedly acknowledge the impressive elements that are on display in “The Midnight Sky.” Its visuals are meticulously crafted and detailed, its soundscape is quite remarkable and the performance that Clooney gives is effective for what it needs to accomplish. It is unfortunate that the storytelling is so poorly constructed that it leaves much to be desired when it comes to connecting with this material on any deeper level. The characters are flat, the shifting tones are aggravating, and the emotional journey presented is shallow and uninteresting. There may be a reverence for the return of tentpole spectacle this year, but this one is not attached to a story that is worthy of investment.