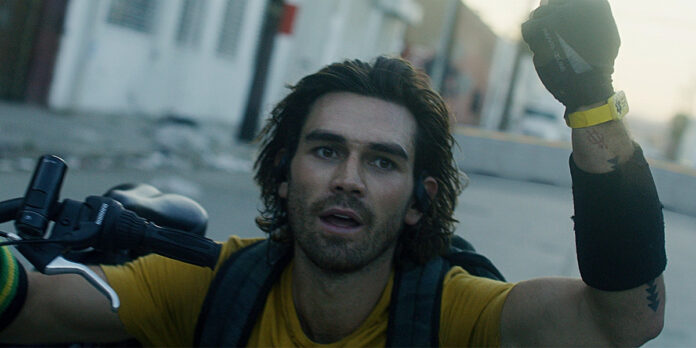 THE STORY – Immune to the COVID-23 virus, a courier races against time to save the woman he loves from a quarantine camp.
​
THE CAST – K.J. Apa, Sofia Carlson, Craig Robinson, Bradley Whitford, Alexandra Daddario, Paul Walter Houser & Demi Moore

​​​”Songbird” stirred up controversy well before its release. The film’s decision to tackle the ongoing Coronavirus pandemic was not looked upon in a positive light, nor was the idea that the virus had evolved to become even more deadly in the characters’ world. It was primarily considered to be a tone-deaf decision, and I’m sorry to say that watching the film will do little to improve that stance.

“Songbird” takes great pains to parallel the pandemic we are currently experiencing. The opening credits use news footage to set the stage (the oldest exposition trick in the book) and let us know that COVID-19 has become COVID-23 and civilians have been relegated to staying indoors. The only people allowed to roam the streets are immunity cases like Nico (K.J. Apa), who works as a bike courier. He’s grown content with the state of things, but when he discovers that his girlfriend Sara (Sofia Carlson) might have been infected, he races through the empty streets of Los Angeles to save her.

The “Songbird” trailer played up the romance between Nico and Sara, but the film does very little to develop it beyond the superficial. They say cute things to one another and talk vaguely about the future, but so little is gleaned about them or their past that the sweet nothings feel particularly hollow.

Apa is likable enough as Nico, bringing a scraggly charm to an otherwise thinly-sketched character. He’s decent at romantic banter and surprisingly capable when it comes to the action scenes, which make up most of the film’s second half. I would not venture to say that Apa’s charisma is enough to elevate the film, but he’s an easy actor to root for and the film’s most enjoyable touches are often by his hand. There’s a welcome charm that resonates when he delivers a package to a wealthy family and pretends to bump into a plant to amuse their child.

Each of these characters feels shoehorned into the film, but they do so little to flesh out the narrative that they wind up feeling like stitched-together short stories instead of a sprawling ensemble. The only thing that’s sprawling is the runtime when you realize there’s barely enough plot to fill a thirty-minute short.

I’m at a bit of a loss when it comes to the subplot involving Demi Moore and Bradley Whitford. They play the aforementioned wealthy family, and the more we see of them, the more we learn about their fractured lifestyle. Whitford ditches the snarkiness and wit of his best performances and chews the scenery as a white-collar degenerate who jeopardizes the lives of others for sexual thrills. There’s nothing pointed or revelatory about the character, which simply makes him unpleasant to watch. Moore is less silly but also less invested. Both actors have seen better days.

“Songbird” is co-written and directed by Adam Mason, and it bears all the hallmarks of earlier works like “Junkie” (2012) and “Hangman” (2015). His resume suggests he likes to tackle stories that are bloody, lowbrow and bound by genre tradition. These are not inherently bad things. However, they do pose an issue when paired with a global issue that has claimed thousands of lives. Mason does not have the dexterity to tackle COVID on screen, and the decision to do so results in a film that feels consistently tone-deaf.

Mason’s creative decisions feel uninspired at best and exploitative at worst. Nothing profound is gleaned from his depiction of the future or a population gradually being deprived of human interaction. It’s all presented with the same fantasy sheen as the abandoned cities in “I Am Legend” (2007).

As a collection of individual parts, “Songbird” boasts some likable actors and tender moments. But as a whole, it’s a shoddy attempt to capitalize on the COVID pandemic without much in the way of artistic merit. If you’re going to be so bold as to exploit a global issue, you should at least try to make it entertaining.