“the man who sold his skin” 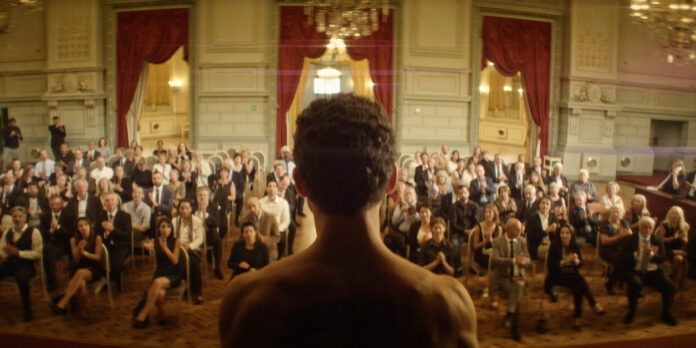 THE STORY – A Syrian refugee in Lebanon allows his back to become a canvas for a famous tattoo artist. Soon, collectors become interested in this work of art.
​
THE CAST – Yahya Mahayni, Dea Liane, Koen De Bouw & Monica Bellucci
​
THE TEAM – Kaouther Ben Hania (Director/Writer)
​
THE RUNNING TIME – 104 Minutes

There are many instances in which art’s political implications can be explored in some fascinating avenues worthy of discussion. It’s an inherently rich subject that has never ceased to capture attention, particularly as art itself can be wielded as a tool against politics as often as it is employed on behalf of political establishments. These facets have the potential to convey a nuanced portrait of global relations and how communities interpret the world around them. That’s no doubt the ambitions of “The Man Who Sold His Skin,” the newly minted Best International Feature nominee from Tunisia. However, such ambitions are not always met throughout this slightly enjoyable but very uneven film.

The film centers around a young Syrian man named Sam (Yahya Mahayni), who is in a celebratory mood one day with his fiancée Abeer (Dea Liane). His joyous outbursts on a public train get misinterpreted as calls for freedom and rebellion amid the country’s civil war, and this forces him to flee. He leaves Abeer behind, who is eventually married off to an affluent diplomat. Sam finds his way to Lebanon as a refugee with no resources. That is until he meets Jeffrey Godefroi (Koen De Bouw), a famous artist who approaches with a proposition. Godefroi will offer fame and fortune if Sam allows a giant tattoo of a visa to be shown on his back for a traveling art exhibit. Sam agrees to this in the hopes of getting back to his lost love, but he soon realizes that he might have given up far more than mere flesh.

The film’s strengths undoubtedly lie in the filmmaking, and director Kaouther Ben Hania does manage to feature some striking imagery. Strong compositions inform the impressive cinematography that keeps the world vibrant and energetic. The score by Amin Bouhafa also serves the material well and helps to elevate the filmmaking even more. Hania’s direction appeals to the broader, more entertaining elements of this story while also recognizing the contemplation of larger themes. The pacing is not always the most engaging, but the efforts behind the camera do quite a lot to craft a vivid and enticing vision that’s nice to witness.

The larger issues at work here are in Hania’s script. While the themes of the conflicting relationship between art and politics are undoubtedly present, its analysis is far less captivating. The nature of the role an artist plays in the exploitation of their subjects is shown, as well as how refugees fleeing from war feel displayed to international audiences for clinical study rather than genuine compassion. These are intriguing topics that are, unfortunately, wrapped around pedestrian emotional journeys that offer very little complexity on the level of character. The stilted dialogue does no favors, neither the more hollow and absurdist take on the landscape of abstract art. It all leads to a finale that goes for a surprise but feels inert in execution. The screenplay sees the potential of interesting discourse but does not find the most compelling methods to examine them.

Mahayni’s central performance finds an effective strength, and he carries a good amount of screen presence for a rather reserved character. He successfully communicates the tragedy surrounding this man due to unfortunate circumstances and the complicated feelings that envelop his somber dedication. It’s not the most extraordinary effort, but he radiates an alluring persona that is transfixing to watch. He shares some warm chemistry with Liane, who also provides a sincere characterization that is appealing. Sadly, De Bouw is less inviting as a quasi-villain who doesn’t convey the appropriate menace to be an interesting antagonist. None feel more wasted than Monica Bellucci as Godefroi’s assistant in a role that’s not only underwritten but portrayed stiffly and blandly.

The issues that “The Man Who Sold His Skin” brings up are indeed fascinating on their own terms. There’s much in the material that lays the groundwork for inquisitive discussion and nuanced scrutinization. Unfortunately, much of the potential isn’t realized within this screenplay, which weighs down the film immensely despite its handsome filmmaking and decent performances. It’s a somewhat entertaining film to watch, but it’s also shallow in the way it chooses to consider the intersection of art and politics. There are far worse options, but the opportunities to find the most attractive arguments here are mostly unfulfilled.