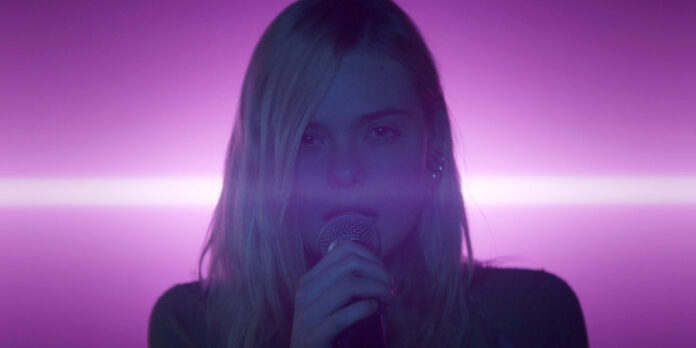 THE STORY – A shy teenager dreams of escaping her small town and pursuing her passion to sing. With the help of an unlikely mentor, she enters a local singing competition that will test her integrity, talent and ambition.

​​Anthony Minghella was a terrific director of spectacle and drama who gave us memorable films such as “The English Patient,” “The Talented Mr. Ripley” and more. He may have tragically been taken away from us too soon in 2008. But now, in comes his son Max Minghella, who you may have recognized from “The Social Network” and “The Handmaid’s Tale” for his acting ability. With “Teen Spirit,” this is his first foray into directing and stepping into his father’s footsteps and to no one’s surprise, his future, much like his main character’s future in his directorial debut, looks bright.

Right from the very beginning, we can already tell that Minghella is a talented director. He has a keen eye for composition, framing, use of color, lensing, and movement with the camera. Partnering up with cinematographer Autumn Durald, the two create a feature that at times feels like a music video but never loses its cinematic quality. There is a radiance, beauty and expressionistic quality to the look of “Teen Spirit” that is intoxicating at times.

​Minghella not only brings it in the visuals department but he further establishes his skill with dynamic editing and incorporating an electronic score that pulsates with energy. Sometimes the two are often synchronized during the musical performances creating that music video-like quality I described before. The bass from the music shakes the foundation of wherever you’re watching this movie. The lights flare up on the camera lens and shine directly into your eyes. Minghella does a lot to overcome what is ultimately this film’s downfall: its screenplay.

Tell me if you’ve heard this one before: A shy average teenager from a small farm town hopes to use her singing ability to make a new life for herself in the music industry. We all have. It’s nothing new. While Minghella brings a lot to the table, “Teen Spirit” is never able to rise above its tired and cliched story that we’ve seen a hundred times before.

Violet (Elle Fanning) is 17 years old, works in a restaurant and has the potential talent to be a star. But how will she get there when her mother disapproves and is dealing with issues of her own following the aftermath of her husband, Violet’s father, walking out on them? The solution is a former opera singer named Vlad (Zlatko Buric) who becomes Violet’s manager, believes in her talent (even though he’s also looking for his own share of her profits) and helps her get to the Teen Spirit audition which could change her entire life. Naturally, Vlad will become the father figure that Violet is lacking and everything will work out in the end, right? Well, I’m not going to spoil anything for you but I’m pretty sure you can fill in the blanks from here.

Elle Fanning continues to add to her already impressive resume with a performance that is at times a mixed bag due to her sliding Polish accent. However, her singing ability, stage presence and of course, screen presence is totally believable as she deals with setbacks, heartbreak, opportunity and triumphs on her road to stardom. The trailers make it look like Rebecca Hall is a major character in the movie but she really doesn’t make an impression until the third act when she grants Violet a pivotal moment in her career.

This is as much Fanning’s show as it is Minghella’s and the two definitely go all out with some head boppers that are sure to evoke a response from the audience with covers from Ellie Goulding, Ariana Grande, Katy Perry and more. I just wish the story took more risks and did something fresh but this is still a solid effort nonetheless from both of them and as always, we look forward to what both of these talented artists will bring us next.