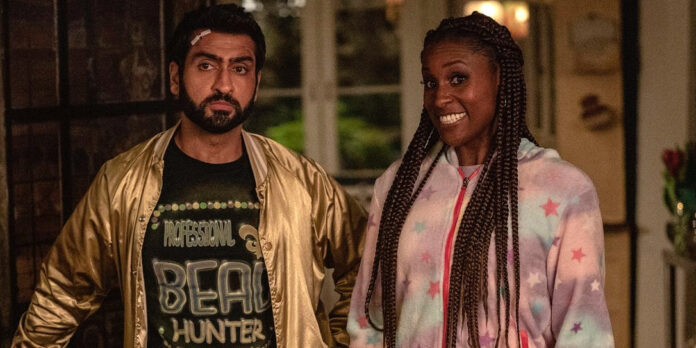 THE STORY – On the brink of breaking up, a couple gets unintentionally embroiled in a bizarre murder mystery. As they get closer to clearing their names and solving the case, they need to figure out how they, and their relationship, can survive the night.
​
THE CAST – Issa Rae, Kumail Nanjiani, Paul Sparks, Anna Camp & Kyle Bornheimer

There’s a certain kind of movie that goes straight to Netflix: An enjoyable, but not particularly engaging comedy starring one or two prominent comedians that feels like it was mostly improvised, shot, and edited mostly indifferently, and with a few catchy pop songs on the soundtrack. It’s the kind of movie that, a few years ago, you would come across while channel surfing, watch because you remember the trailer looking kind of funny, and then forget about almost instantly. “The Lovebirds,” which was supposed to play at SXSW before a wide theatrical release courtesy of Paramount, fits right in. Its studio budget means it looks and sounds a bit more polished than something like “Always Be My Maybe” or “Someone Great,” but Michael Showalter’s latest film still feels like something you put on while folding laundry, doing household chores, and scrolling through your social media platforms.

Issa Rae and Kumail Nanjiani star as Leilani and Jibran, who we first meet the morning after their first date which turns into a whole day spent together. It’s clear they have a great rapport, but four years later, they’ve hit their breaking point. They break up, but soon after, they hit a bicycle messenger with their car; a man claiming to be a police officer takes over their car to chase the messenger and runs the poor guy over. Multiple times. Being people of color, Leilani doesn’t want them to go to the police, and so begins the couple’s nighttime odyssey of trying to find out who those men were so they can clear their names.

If all of this sounds a bit familiar, that’s because the whole “ordinary couple played by comedians overcomes relationship troubles when they accidentally get involved in a criminal plot” thing has been done before (think Steve Carell and Tina Fey in “Date Night”). “The Lovebirds” is a perfectly fine version of this standard Hollywood plot, but the thing just doesn’t spark. It’s difficult to point to what exactly doesn’t work, though. Rae and Nanjiani are both as charming as ever, and they have decent chemistry. The comedy only really works in those moments when the film really hits you over the head with it: in scenes that feel like the two stars are improvising until they hit on something funny. The problem is that these scenes completely break the flow of the movie, as we’re suddenly watching Rae and Nanjiani in an improv scene, not Leilani and Jibran trying to wriggle their way out of a sticky situation. Sure, it’s funny, but not in a way that serves the film or its characters.

Unfortunately, the script doesn’t help. Writers Aaron Abrams and Brendan Gall (working from a story co-conceived with Martin Gero) keep piling on wacky incident after wacky incident – Anna Camp throwing on a ludicrously over-the-top Southern accent in an out of place barn, and a sex cult straight out of “Eyes Wide Shut” – but all the crazy situations in the world can’t overcome the sludge-like quality of the dialogue, which sticks in the performers’ mouths something awful. And even though the situations themselves are crazy, the plotting, on the whole, is entirely predictable. Even Showalter seems uninspired, lending the film none of the shaggy energy that made “Wet Hot American Summer” so enjoyable. He tries to get at the humanity of his last collaboration with Nanjiani, “The Big Sick”, in scenes that focus on Leilani and Jibran’s relationship, but the need for the film to be a big, balls-out studio comedy gets in his way.

In the end, it all comes down to Rae and Nanjiani to get us through. Like many comics before them, they get a little stuck in their stand-up rhythms (Nanjiani’s bit about diner milkshakes is so cringey that the film calls itself out on it later) and are better when they’re just improvising together. But the two have good chemistry and have such charming personalities that they even survive the long, bad-even-by-real-couple-standards, fight that opens the main narrative. In the hands of less talented, less charismatic performers, “The Lovebirds” may well have been unwatchable. But thanks to Rae and Nanjiani, it becomes an enjoyable, if not attention-grabbing, watch. In other words, a perfect movie to put on in the background while you’re working from home during the coronavirus crisis of 2020.