“THE LEGEND OF TARZAN” 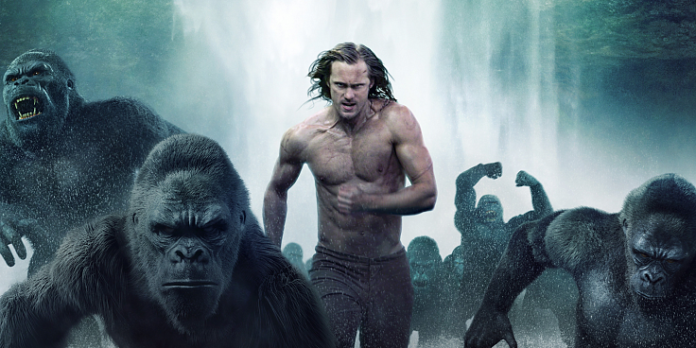 THE STORY – It’s been nearly a decade since Tarzan (Alexander Skarsgård), also known as John Clayton III, left Africa to live in Victorian England with his wife Jane. Danger lurks on the horizon as Leon Rom (Christoph Waltz), a treacherous envoy for King Leopold, devises a scheme that lures the couple to the Congo. Rom plans to capture Tarzan and deliver him to an old enemy in exchange for diamonds. When Jane becomes a pawn in his devious plot, Tarzan must return to the jungle to save the woman he loves.

I should be more forgiving in regards to Harry Potter director David Yates’s latest adaptation time of the cultural icon that has spawned many adaptations, including a popular Disney animated film. I should be more forgiving that the film tries to tell a story that we are not quite expecting which could function as a spiritual sequel to the so-said Disney Animated film. I should be more forgiving of the film’s attempts at doing a live action version of the man amongst apes utilizing the latest that technology has to offer. I should be more forgiving. But I’m not.
​
​The African Congo is undergoing colonization by the King Of Belgium,  who is plucking away at the continent’s minerals and resources by enslaving the natives of the land. Captain Rom (Christoph Waltz) is a businessman who is sent in to negotiate with the natives and makes a pact with Chief Mbonga (Djimon Hounsou) that if Rom can deliver to him Tarzan (Alexander Skarsgard) so that Mbongo can settle a personal vendetta, then Rom will be paid with the land’s diamonds. Tarzan, who is now living under his given name John Clayton III, now lives in England with his wife Jane (Margot Robbie) must now return to the jungle where he was raised by wild animals, to help the people of natives of his homeland. However, when Jane is captured by the vicious Rom, Tarzan, accompanied by his friend and advisor George Washington Williams (Samuel L Jackson), must go deep into the jungle and re-connect with his wild side to save his beloved wife.

It’s clear in nearly every frame of this film that director David Yates is not passionate about the film he is trying to make. The dialogue leaves much to be desired, the pacing is dreadful (I nearly fell asleep multiple times during this unbelievably boring film), the performances are uninspired, and even the film’s computer generated visuals lack any kind of wonder to them. The live action photography fairs much better here than the CGI. And when the gorgeous real sets are matched up with Rupert Gregson-Williams’s African chanting, drum filled and string score, the film does earn some points. However, this bore of a film lives and dies due to its direction.

For example, there is no reason to show flashbacks throughout the film. They only help to halt the film’s chances at building any kind of momentum and would have been better placed if they occurred in a montage during an opening credits sequence. The story is one that majority of audiences are very familiar with and the story that Yates and his team are trying to tell here is somewhat interesting in that it is a chapter of Tarzan’s life that we are not wholly familiar with. But wooden performances from Alexander (Sorry, this is not your breakout film just yet) Skarsgard, Christoph Waltz (Is this really the same guy who gave us back to back Academy Award winning performances?) and even Margot Robbie (At least she’s still stunning to look at as a damsel in distress, despite her telling Rom and the audience she is not), this film crumbles hard. Samuel L Jackson has one or two good laughs, but is mostly there to collect a paycheck and that is exactly the problem. Everyone seems to be phoning it in. There is nothing in this film that speaks to me saying all of the talent involved would have gladly worked on this film for free.

You would hope that the action scenes in this film would at least pull the audience out from their slumber, but they too offer nothing new except for distractingly bad special effects for a movie of this size. There are moments of Tarzan defying the laws of gravity and medical science (One scene involving Tarzan fighting an Ape is absolutely ludicrous). So is “The Legend Of Tarzan” a complete disaster? It’s certainly close. “Africa’s favorite son” (What?!) returns to the screen in the most uneventful way possible where almost every scene under David Yates’s direction lacks cohesion and a reason for being. You will find no subtlety in this jungle, just artificially.