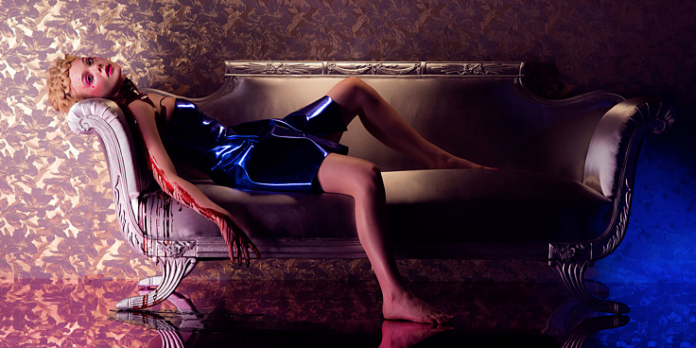 THE STORY – Jesse (Elle Fanning) moves to Los Angeles just after her 16th birthday to launch a career as a model. The head of her agency tells the innocent teen that she has the qualities to become a top star. Jesse soon faces the wrath of ruthless vixens who despise her fresh-faced beauty. On top of that, she must contend with a seedy motel manager and a creepy photographer. As Jesse starts to take the fashion world by storm, her personality changes in ways that could help her against her cutthroat rivals.
​
THE CAST – Elle Fanning, Karl Glusman, Jena Malone, Bella Heathcote, Abbey Lee, Christina Hendricks & Keanu Reeves
​
THE TEAM – Nicolas Winding Refn (Director/Writer), Mary Laws & Polly Stenham (Writers)
​
THE RUNNING TIME – 117 Minutes

By this point, we should know what to expect from Nicolas Winding Refn. “Drive” still stands as my favorite film of 2011 and one of my favorite films of the decade, while “Only God Forgives” was underwhelming, to say the least. His latest effort in “The Neon Demon” falls somewhere in between. The visuals are what mostly carry this film through till the end, along with a spellbinding performance from Elle Fanning. However, Refn’s pretentious pacing and thinly written script hinders the film from reaching the same levels as “Drive” or even “Bronson” or “Valhalla Rising.” “The Neon Demon” may be pretty on the outside, but inside it’s truly hideous.

Jesse (Elle Fanning) is a 16-year-old girl who has recently moved to Los Angeles with big dreams of becoming a model. She is told by everyone around her that she has a bright future ahead due to her natural beauty. This angers the other female models who have had to do whatever they can to claw their way towards the top while Jesse has everything given to her on a silver platter. Jesse must face enemies from all around, including an inappropriate hotel manager named Hank (Keanu Reeves) and will inevitably change her naive personality to fit the perception that has been laid upon her.

First and foremost, this is a seriously gorgeous movie with some truly haunting imagery that is surely not going to leave your mind for days after the final credits roll. “The Neon Demon” is dripping in style and exuberant colors left and right. Cinematographer Natasha Braier (“The Rover”) is a talent to watch out for and I can’t wait to see what other high profile projects she may be offered as a result of her work on this film. The electronic score by Cliff Martinez pulses with radiant energy and perfectly captures the tone and mood that Winding Refn is going for in this disturbing tale.

While those two technical merits help to establish the film’s atmosphere, it’s the horrible pacing by Winding Refn that like “Only God Forgives” threatens to derail the entire film. Camera shots linger on and on for long stretches of time with no real feeling or purpose. Dialogue and character motivations are kept at a minimum resulting in a film that has a very simple message with little in the way of substance. We understand that the modeling industry is a cutthroat environment where everyone is out to eat you alive and in the case of this film’s final act, this phrase is taken literally. Jessie is told by others that she is great due to her natural untainted beauty, despite her lack of experience within the industry. She is viewed with contempt by the other women who have either slept with other men or have had plastic surgery done to get to where they are today. “Anything worth having hurts a little. Besides, nobody likes the way that they look.”

There is an interesting story within “The Neon Demon.” Jesse becomes god-like in her self-adoration which she consumes from the praise of others. However, her arrogance is her own undoing which is powerful in it of itself. And the characters of Hank played by Keanu Reeves and Ruby played by Jena Malone are interesting within their own right but aren’t expanded upon enough to make much of an impact on the plot that feels entirely necessary or earned. This is Elle Fanning’s show and she knocks it out of the park in her most mature and daring role to date. Her natural beauty and stillness is magnetic in its allure and commands every frame that she occupies within the film. Nicolas Winding Refn however, continues to be his own worst enemy. While his technical contributions towards the film’s look and feel are unmatched and worth the price of admission for cinephiles alone, more general audiences will be frustrated by his unconventional storytelling and shallow characterization.