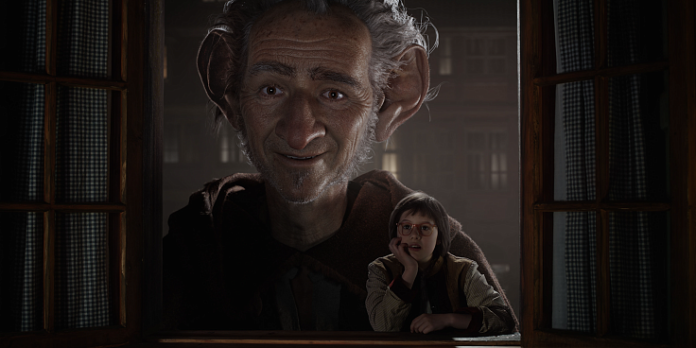 THE STORY – Ten-year-old Sophie is in for the adventure of a lifetime when she meets the Big Friendly Giant (Mark Rylance). Naturally scared at first, the young girl soon realizes that the 24-foot behemoth is actually quite gentle and charming. As their friendship grows, Sophie’s presence attracts the unwanted attention of Bloodbottler, Fleshlumpeater and other giants. After traveling to London, Sophie and the BFG must convince Queen Victoria to help them get rid of all the bad giants once and for all.

There are many forms to the masterful director that is Steven Spielberg. One moment he can be turning in a historical drama such as “Bridge Of Spies.” The next moment, he can be busting out a science fiction classic in “Minority Report.” Then there is always the occasional blockbuster such as “Jurassic Park” or another entry in the “Indiana Jones” film series. But every now and then, Spielberg simply wants to make a family film like 1991’s “Hook.” And that is exactly what “The BFG” is. It’s a non-offensive, light-hearted, family film, awash in sentimentality. My five-year-old would absolutely love it…if I had a five-year-old.
​
​”The BFG” (Stands for big friendly giant), takes place in London where a young orphan girl named Sophie (Ruby Barnhill) is struggling with her insomnia at the orphanage one evening when she encounters a giant (Mark Rylance) running around outside from her window. She is picked up by the giant and brought to a magical place called Giant Country. The BFG is a kind presence towards Sophie and proclaims he is a guardian of dreams which he keeps in his workshop bottled up for all of the local children. Their friendship is tested by The Fleshlumpeater (Jemaine Clement), who is a larger giant out to find Sophie and eat her.

Roald Dahl’s children’s book has been adapted for the screen by Melissa Mathison who also penned “E.T. The Extra-Terrestrial,” in her last screenplay before her death in late 2015. While I want to be respectful towards her work here, it’s hard to tell if the reason as to why “The BFG” fails is because of her adaptation or because of Spielberg’s translation of the material from page to screen. The film is a lovely feast for the eyes with colorful images that pop off the screen, but they don’t fill us with the same wonder and amazement as other Spielberg films have done before. This mostly has to do with Spielberg’s pacing of the film which also clocks in at nearly two hours when it would’ve served its audience better to have at least a half an hour cut from the film. It’s plodding and takes its time when it nearly forgets that there is a story to tell besides the banter shared between Mark Rylance and Ruby Barnhill (Both of whom are expressive and energetic in their respective roles).

There is some real technical wizardry on display in “The BFG” as nearly every shot involving Rylance must have been a creative challenge on some level. It’s in the film’s design and visuals where Spielberg’s team flourishes (Production design by Rick Carter and the sound team stand out). However, the unmemorable score by John Williams (Did I really just say that?) and the slow pacing set by editor Michael Kahn are what nearly kills the picture and turns “The BFG” into a letdown of a film. Often ridiculed for injecting his films with sentimentality when there is no need for it, Spielberg imbues “The BFG” with an awful amount of sentimentality towards its third act which may or may not (But more probably may) have adult audiences rolling their eyes.

Spielberg wants you to think that the film is magical, but it’s ultimately hollow and uneventful. Perhaps we expect too much from Steven Spielberg and his longtime team of collaborators. “The BFG” isn’t necessarily a bad film by any means. It’s simply a disappointing one, but one that most likely won’t disappoint children. Audiences who are fans of Spielberg’s more mature work, however, should stay clear of this one. When your film is filled with more fart jokes and “The Hobbit” comparisons than your mind knows what to do with, then you know this one is a misfire.