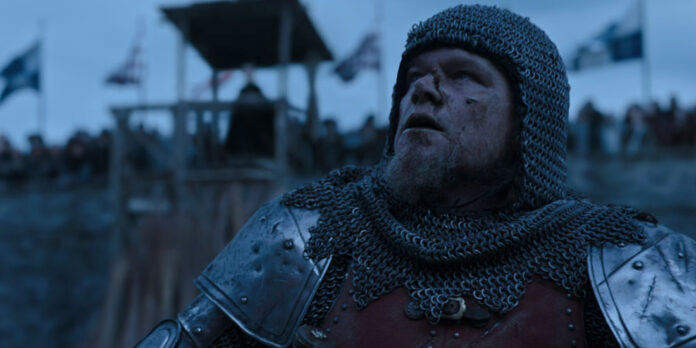 THE STORY – Jean de Carrouges is a respected knight known for his bravery and skill on the battlefield. Jacques Le Gris is a squire whose intelligence and eloquence makes him one of the most admired nobles in court. When Le Gris viciously assaults Carrouges’ wife, she steps forward to accuse her attacker, an act of bravery and defiance that puts her life in jeopardy. The ensuing trial by combat, a grueling duel to the death, places the fate of all three in God’s hands.

​​For as long as men have held powerful positions, they’ve been the ones to decide the fate of women. Ridley Scott’s medieval #MeToo film “The Last Duel” shows this to be true throughout its entire runtime, but one scene, in particular, stands out. A court official declares that a woman can only conceive when she experiences sexual pleasure. A rape, according to this man, can never lead to a pregnancy. It doesn’t matter that that’s not true in the slightest; it carries an unbelievable weight because a man said it. The word of men against one woman is at the core of “The Last Duel,” which, told in three parts, reveals who is telling the truth and who will pay the ultimate price when it comes to a rape accusation.

Right off the bat, audiences are thrown in the middle of what’s about to be a brutal showdown with Jean de Carrouges (Matt Damon) on one horse, Jacques Le Gris (Adam Driver) on the other, with one woman, Marguerite (Jodie Comer), Carrouges’ wife, dressed in black, overlooking the arena. There’s tension and nervousness in the air for this life or death battle. But before we see who is triumphant in the last judicial duel that took place in December 1386, we need to see how we got here.

The tale begins with Carrouges’ perspective. Donning facial scars and a medieval mullet, Carrouges is a knight whose bravery is unmatched on the field. He’s always been a good friend to Le Gris, and even saved him in battle. But when Count Pierre d’Alençon (Ben Affleck), their overlord, very clearly favors Le Gris and gives him all the land and titles that should belong to Carrouges, their friendship begins to unravel. And when Carrouges marries Marguerite (Jodie Comer) and lives a blissful life (according to him), even more betrayal comes his way.

But if you ask Le Gris to tell the story, you’ll get some different information. He is a charmer who attracts all women, and Carrouges is a jealous fool. Once Le Gris sets his eyes on Marguerite and falls in love with her, he immediately believes that, like so many other women, she must be in love with him too. When he storms into her home when Carrouges is away one day, he forces himself on her, but he says that they both couldn’t help themselves. Marguerite’s cries were just merely what all women do until they ultimately succumb to their desires.

Affleck and Damon wrote the two male-centric parts, while Nicole Holofcener took on the third act, which documents Marguerite’s truth. And it isn’t until we finally hear from her that we experience an immense amount of pain, not just for her, but for all the women, past and present, who haven’t been believed in society. Rewatching the rape scene from Marguerite’s perspective is difficult to watch, but it’s what happened and needs to be known. After she tells Carrouges, he immediately asks if she provoked Le Gris. Her friend turns her back on her just because Marguerite said Le Gris was handsome, so she must be lying about being rape. And as she stands trial, she’s asked whether she has pleasurable intercourse with her husband and whether she experienced any pleasure from her encounter with Le Gris. Each of these moments hurt to see and hear, but she never backs down from speaking the truth and getting justice. It still does end up being a heavily male-focused story, but then again, that has happened throughout history and continues today. Speaking to Le Gris, a priest poignantly says, “Rape is not a crime against a woman. It is a property matter.” After seeing the whole story, it all leads up to the duel from the beginning, which has you on the edge of your seat. It’s up to God to decide who is telling the truth. If Carrouges wins, Marguerite was honest. But if Le Gris succeeds, Marguerite will be found guilty and burned alive.

It’s Comer who shines the brightest in this film. She gives Marguerite a strong and powerful backbone that allows her to stand up for what’s right and for all women. In those demeaning scenes where men question her, Comer keeps her head high and puts her whole self into the moment. It’s a moving performance that will certainly earn nominations this award season. Damon and Driver do a stand-up job of becoming these 14th-century men who only cared about their egos and names rather than listening to the women around them. But there are strange 21st-century expressions that Damon sometimes utters, such as saying he’s “broke.” Affleck has the most fun as the foul-mouthed, careless lord with bleach-blond hair, though it’s hard to honestly believe his character belongs in the time period based on his looks.

Telling the story from three perspectives does mean that some scenes are repeated, and often too many times. But for the most part, Affleck, Damon, and Holofcener do keep it interesting as they slowly reveal new information and show the cracks in certain “truths.” Carrouges believes he’s such a kind and warm husband to Marguerite, but when she tells her side of the story, we see his ego and desire for her dowry take over. And between determining who is the friend or foe, it’s a he said, he said situation for Carrouges and Le Gris. In repeating these scenes, some flaws show up with the editing and flow of the story, such as awkward cuts from one scene to another.

“The Last Duel” takes on a subject that, whether it’s told in the 14th or 21st centuries, is still relevant today. Though the story repeats certain scenes far too many times, the writers keep it interesting with each iteration by giving us new layers to this drama. Performances from Comer, Damon, and Driver add even more to this tale. While it’s still heavily a male-focused movie, at the core is Marguerite, who chooses to stand up and not keep quiet — unlike how so many other women have been forced to — and she’s certainly left her mark in the world.