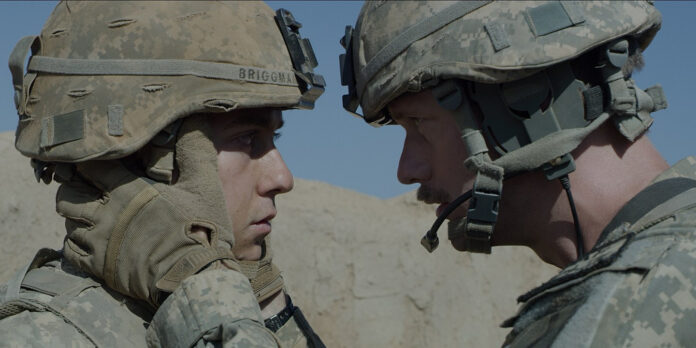 THE STORY – An American soldier in Afghanistan is disturbed by his platoon’s behavior and is faced with a moral dilemma.

​​​Andrew Briggman (Nat Wolff), a young, fresh-faced soldier, enters a platoon ready to help change the world. Unfortunately, he becomes tangled up in a web of peer pressure, toxic masculinity, and violence that spirals out of control. Centered around the real events of the “Maywand District Murders,” director Dan Krauss adapts his own documentary, also called “The Kill Team,” exploring dangerous murders of civilians in Afghanistan in 2010. The characters are fictionalized, but the murders were very real. For someone unfamiliar with these real events, like me, “The Kill Team” is genuinely tense, and it keeps you guessing until the end.

Briggman’s unit is led by a kind officer, someone wanting to make friends with the locals. Sadly, his time doesn’t last long. As soon as Sergeant Deeks enters the scene to replace him, played by Alexander Skarsgård, the audience knows Briggman’s world is going to shift dramatically. As with most Skarsgård performances, he’s menacing right off the bat. Still, he’s an alluring figure for the men in Briggman’s unit: he’s a tough, experienced soldier, and he leads them with a strong hand. He’s clearly grooming the unit to be dangerous like he is. The men want to learn from Deeks, want his approval, and he knows exactly how to manipulate them.

Right away you can feel the radicalization happening in real-time. You can feel the hatred and anger brewing in these men, even Briggman, each time a soldier is killed. The men talk about the Afghans as animals, they talk about wanting to kill them all. When Briggman says something similar to Deeks, he perks up, seeing potential in him. It’s horrifyingly believable. Though this is a war film, there’s very little action here; it’s much more focused on the relationship between Deeks and Briggman than the killings themselves.

The script doesn’t give a great deal of depth to the Sgt. Deeks character, very clearly showing us his corruption in every scene, well after we get the point. Despite the on-the-nose writing, Skarsgård brings complexity to the role. He’s quiet, never overt with his intentions, never yelling or getting physical with the platoon, but simply commanding them through his ominous presence. His performance is the clear highlight from the film, despite a shaky (at best) American accent. Hearing Skarsgård say “lighten up dude” in a weak accent gave me a genuine laugh.

There’s no gray area before long: Deeks is encouraging the murder of Afghan civilians. As Deeks begins to more overtly use violence to breed jealousy and resentment among the unit, Briggman starts to distance himself. It’s clear he’s uncomfortable by all of this. The film does a really great job of making Briggman’s path unclear. There were times where I felt that he would fall in line with the unit and become a violent, dangerous soldier as Deeks wanted. Other times I was sure he would never give in. Thanks to strong tension that continues to be ratcheted up, the film stays truly engaging.

Briggman’s uncertainty starts to alienate him from the unit. He’s fearful, unsure of what to do. He tries to get his dad involved, but soon fears that may cause even more problems. The film steeps him in paranoia, second-guessing his every move. It’s really effective. Without knowing the ending of the real story, it was genuinely difficult to predict the outcome thanks to the strong sense of anxiousness.

Though there is little new added to the extensive conversation surrounding the Afghanistan and Iraq wars, The Kill Team” highlights the dangerous, and perhaps all too easy, radicalization that can happen in this culture. With a high value placed on toughness, even violence, it can be manipulated. This film highlights that toxicity really well. Skarsgård steals the show, but there’s plenty to take from this tense war drama.