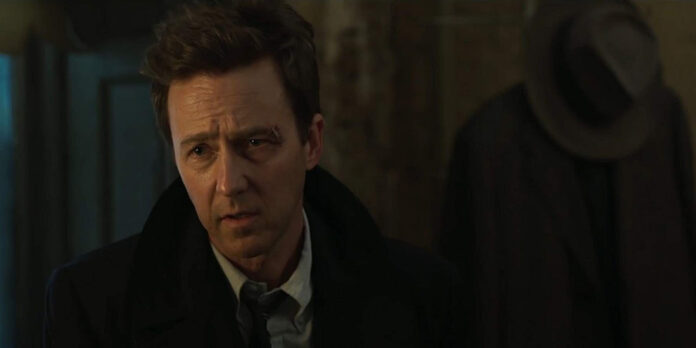 ​You’ve got to respect labors of love. Oscar-nominated actor Edward Norton has been trying to bring Jonathan Lethem’s award-winning novel to the screen since the mid -2000s. Clearly, the result has been worthwhile, though far from perfect. Simply put, characters of “Motherless Brooklyn” come and go without any significant development, and Norton’s adaptation could easily lose 15 minutes or so — but this film (only his second directed feature) has a deep bench of talent who deliver, helping to result in a big chewy movie that has a density that you rarely see in screenplays anymore.

Lethem’s novel is set in contemporary times, but Norton’s screenplay brings it back to the 1950s, which is much more appropriate given the film’s throwback film noir overtones. Lionel (Norton) spent most of his life in a New York City orphanage along with fellow orphans Tony (Bobby Cannavale), Gilbert (Ethan Suplee) and Danny (Dallas Roberts) who are all plucked by Frank Minna (Bruce Willis) to staff his secret detective agency, which poses as a car service as a front. Lionel, who suffers from Tourette’s Syndrome (a condition which had yet to receive a name at the time), had alienated many people by the verbal outbursts caused by his condition, so he was especially grateful to Frank for giving him a purpose in life. When Frank is fatally gunned down, Lionel is momentarily at a loss but soon dons his mentor’s coat and fedora to track down his killer.

Focused and resolute, Lionel begins to lose several of his Tourette’s tics as he zeroes in on the woman whom Frank was tracking at the time of his murder — civil rights activist Laura Rose (an excellent Gugu Mbatha-Raw), who has been delving into the activities of a Robert Moses-type of millionaire industrialist Moses Randolph (Alec Baldwin), who has been leveling homes of people of color in Brooklyn to pave the way for a new real estate project, much as the real Moses did. Lionel seeks some way to find a way through Moses’ seemingly impenetrable wall of red tape when he meets up with the developer’s estranged brother Paul (Willem Dafoe), who has been trying to tell the world of his brother’s racist misdeeds.

The main problem with “Motherless Brooklyn” is that the film, which runs a way-too-long 144 minutes, largely depends on the strength of Norton’s screenplay, which introduces and then drops characters and plotlines on a whim, failing to develop a clean through-line going with all of these side storylines. Along the way Norton’s Lionel meets up with some extremely colorful characters such as Cherry Jones’ white civil-rights supporter and Michael K. Williams in a charismatic turn as jazz musician Wynton Marsalis, but, as good as both actors are, their characters often appear to be distractions to the main narrative. And as we lurch from one plot development to another, the characters are left with little time to breathe. Thankfully, Norton’s murders’ row of supporting actors picks up the slack, with each delivering top-notch work in filling out the gaps in their characters.

Of this great ensemble, I’d like to single out Alec Baldwin as underhanded developer Moses Randolph. Baldwin is one of those actors we seem to take for granted – he’s been everywhere over the past decade in both movies and television. Originally pitched as an action lead (his Jack Ryan in 1990’s “The Hunt for Red October” actually wasn’t bad), Baldwin segued into big screen rom-coms (“The Marrying Man,” “It’s Complicated”), finally becoming best known as a TV comedy star, winning Emmys for “30 Rock” and “Saturday Night Live.” But he is arguably most effective when he turns to the dark side, particularly when he portrays shady establishment figures, such as in “Glengarry Glen Ross” and particularly here. His Moses Randolph here might seem one-note on first introduction, but Baldwin is busy peeling the layers back when Norton gives him a smashing monologue near the end of the film that artfully reveals Moses’ complicated motivations. Throughout the film, Norton has shown enormous talent directing actors, but none more so than with Baldwin, who delivers one of his best film performances ever.

Prior to “Motherless Brooklyn,” Norton’s sole directing credit was for the 2000 comedy “Keeping the Faith,” but from his work here, it’s clear that the actor has a good directorial eye (helped in no small measure by Dick Pope’s inspired cinematography that pays homage to film noirs of the past), and he gets the essence of the genre, a skill that has proven to elude several more established directors. As for Norton himself in the lead role as Lionel? It’s a mixed bag of sweet, quieter moments where the actor’s intellect and humanity truly shine through, clashing with the distracting and some might say tonally deaf moments where the tics of his condition pull us out of what is otherwise an admirable effort from the auteur. However you feel about his lead performance either way, he is unfortunately bogged down by his overly plotted script. I suspect there’s a lean, mean 95-minute noir somewhere inside Norton, and hopefully one day a studio will allow him to let it out.