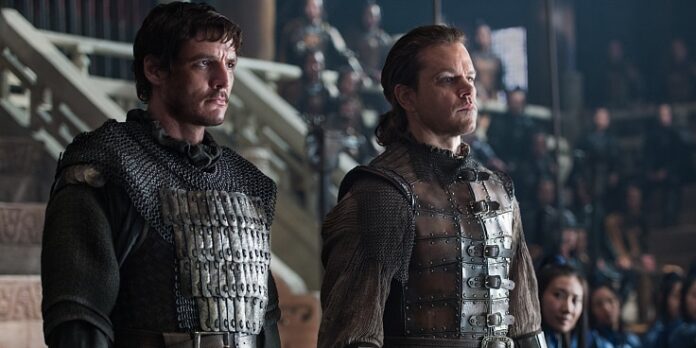 THE STORY – When a mercenary warrior (Matt Damon) is imprisoned within the Great Wall, he discovers the mystery behind one of the greatest wonders of the world. As wave after wave of marauding beasts besiege the massive structure, his quest for fortune turns into a journey toward heroism as he joins a huge army of elite warriors to confront the unimaginable and seemingly unstoppable force.

​I am not even going to bother commenting on the controversy which surrounds “The Great Wall” regarding a white American actor, in this case, Matt Damon, being cast in the leading role of a Chinese film production which centers around one of the world’s greatest man-made structures and stands as a significant symbol for the Chinese culture. I am not going to bother because “The Great Wall” has enough problems as a film that it is completely unnecessary for me to comment on the “White Savior” plot point which many will read into regarding this story.

William Garin (Matt Damon) and Pero Tovar (Pedro Pascal) are two mercenaries, who while fleeing from hill tribes in China find themselves in a cave squaring off against an unknown enemy. When William vanquishes the monster and retrieves its claw, he and Tovar make their way to the Great Wall. There they find the Nameless Order, an army led by General Shao (Zhang Hanyu), whose purpose is to defend the wall from the monsters known as Taotie. When they realize that William carries the claw of one of the Taotie, they realize that a surprise attack is imminent and William must make a decision whether to fight alongside the Nameless Order or not.

“The Great Wall” is all spectacle with no heart. Zhang Yimou, best known to American audiences for his visually outstanding films such as “Hero” and “House of Flying Daggers,” brings both his artistic and blockbuster sensibilities to “The Great Wall” and creates a special effects epic that currently stands as the most expensive Chinese film ever produced (The production budget has been reported to be around $150 million dollars). The production values for “The Great Wall” are very high in terms of scale, extras, visual effects, production & costume design & cinematography. Zhang Yimou crafts some truly awe-inspiring set pieces and action sequences that certainly look good on their own, whether you watch them later individually or even in the film’s trailer. However, taken into context with the rest of the film, there are numerous problems with the film’s narrative, the character’s motivations, and the screenplay’s dialogue.

Dialogue is not this film’s strong suit. The film’s premise already is crazy enough, but to have actors deliver the dialogue seriously and even try to add bits of comedy into the proceedings come off as forced and completely unnatural. This is Zhang Yimou’s first English language speaking film and one has to wonder if his unfamiliarity with the language led to him gathering such stiff and uncommitted performances from Matt Damon, Pedro Pascal, and Willem Dafoe. Even the Chinese actors don’t manage to come across convincingly enough and the film does such a mediocre job of setting up the characters and their relationships (We literally don’t get any character development until 25 minutes into the movie) that when the monsters start attacking the wall we honestly do not care about any of the characters involved. The film moves at a frantic pace during these battle sequences and then comes to a screeching halt in its quieter moments that eventually the brain simply shuts off and you’re left staring at the screen and basking in the colorful images which Yimou brings to the screen. It’s the very definition of mindless entertainment.

“The Great Wall” has some truly impressive action set pieces that will dazzle and excite audiences just long enough before they come to an end and the film’s bland dialogue and uninteresting characters (I can tell you that William Garin is good with a bow and arrow and that’s pretty much it). Zhang Yimou fails to bring heart to the film which makes it lack in stakes and tension. When the film comes to its rushed conclusion you’re left wondering how this whole American/Chinese experiment turned out. Well, quite frankly, the answer is simply not great.