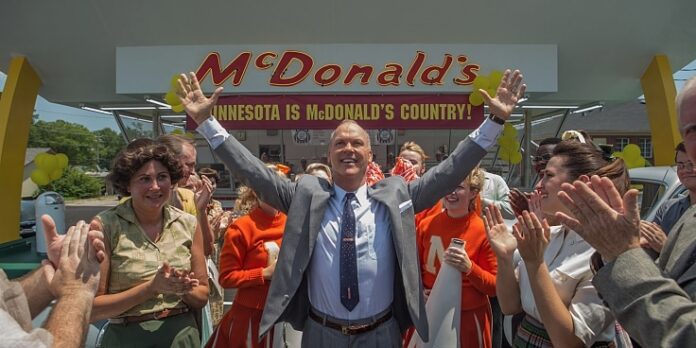 THE STORY – The true story of how Ray Kroc (Michael Keaton), a struggling salesman from Illinois, met Mac (John Carroll Lynch) and Dick McDonald (Nick Offerman), who were running a burger operation in 1950s Southern California. Kroc was impressed by the brothers’ speedy system of making the food and saw franchise potential. Kroc soon maneuvers himself into a position to be able to pull the company from the brothers and create a multi-billion dollar empire.

​The reason that “The Founder” mostly works is due to the magnetic, charismatic and driven performance by Michael Keaton. His Ray Kroc is a sleaze-ball, who will step on whoever he has to all in the name of progress. He’s an unlikable character much like Mark Zuckerberg was in “The Social Network” and Daniel Plainview in “There Will Be Blood.” So why did I not want to root for Ray Kroc to succeed where in those other two films, I got excited every time the protagonist got ahead of his opponents? I do not have the answers, but there is something mundane about how “The Founder” is put together and presents its story that makes its story interesting in small bits but unsatisfying as a whole.

During the 1950’s, Ray Kroc (Michael Keaton) is a down on his luck salesman who is trying to sell mixers to different restaurant chains across the country when one day he receives a call from Richard “Dick” McDonald (Nick Offerman) asking for six mixers. Assuming it is a mistake, Ray travels to San Bernardino California where he experiences Richard and his brother Maurice’s (John Carroll Lynch) restaurant business known as “McDonald’s.” The business model is unlike any other food establishment that Ray has ever seen and he see’s an opportunity to franchise the company which the brothers are apprehensive towards but eventually relent due to Ray’s persistence. Once he becomes a partner with the McDonald brothers, Ray sets off on a fast expansion of the fast food restaurant, establishing locations all over the country. His desire to see the company grow and in turn, his own return on investment (Which involves Ray mortgaging his and wife’s home), comes to a head with the brothers, who do not wish to see their dream transformed into anything other than what they desire.

Of John Lee Hancock’s most recent films (“The Blind Side” & “Saving Mr. Banks”), “The Founder” is his most cynical and cleared of sentimentalism. Ray Kroc is a down on his luck salesman who has never had a big break, but when a once in a lifetime opportunity presents itself to him, he seizes it and never gives up. Michael Keaton, who is such a likable performer, especially in recent years, plays Kroc with the right level of nastiness and brilliance. If released earlier in 2016, it’s possible that he could have contended for some Oscar consideration but instead, he’ll have to settle for positive notices from critics, thus continuing his career resurgence which began with 2014’s Oscar Best Picture winner “Birdman.” If I had to try and take stab at why his character may not personally connect with me, it may have to be because there is never a moment in the film where he reconsiders his actions or has a moment of reflection. Even other relentless businessmen characters such as Mark Zuckerberg and Daniel Plainview had monologues or moments highlighted by the director where their humanity shined through. Each character may end up in a different place by the end of their respective films but “The Founder” may be the bleakest of them all as Ray Kroc not only gets filthy rich but he crushes the McDonalds brothers, whose idea he expanded upon to the point of forcing them to eventually file for bankruptcy.

The supporting players in “The Founder” do not get as much screentime nor as much character development as Keaton does but the heart of the story lies with the aforementioned McDonalds brothers played with humanity by Nick Offerman and John Carroll Lynch. Richard McDonald may be more skeptical of Ray’s intentions which play towards Offerman’s strengths as a tough, hard-nosed skeptic and perfectionist, but its John Carroll Lynch’s sympathetic and unassuming role as Maurice McDonald that helps to keep the brothers in balance and in business with Ray until the heartbreaking ending. All other supporting players such as Linda Cardellini, Patrick Wilson, B.J. Novak and even Laura Dern, show up for their respective scenes and do their jobs in playing important key characters within the narrative but are not afforded the opportunity to turn in memorable performances that help to round out the film.

John Lee Hancock does not give the film is a distinct visual look and the score by Carter Burwell, who I am typically a big fan of, is rather obtrusive and does not help with the mood of the film but rather distracts from it. The film is not a standard biopic, in that it focuses on a small point in time over a couple of years where one man took a concept and turned it into one of the biggest businesses in the world, but it feels like one due to how conventional it feels while watching it. It’s much like the food at McDonald’s itself. It’s alluring at first, but once devoured, you may not exactly be “lovin’ it.” But hey, 1% of the world’s population seems to be loving McDonald’s food every day and I suspect those odds bode well for this movie’s chances for audiences as well.