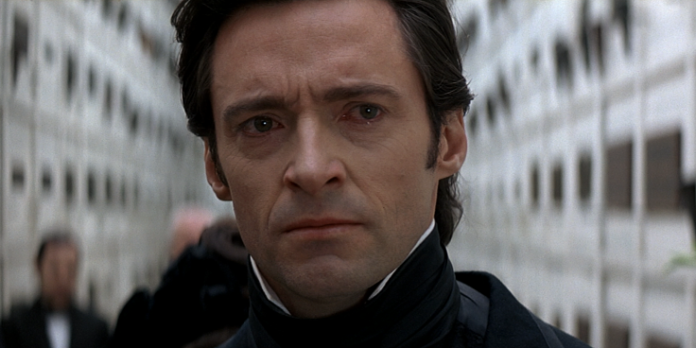 THE STORY – An illusion gone horribly wrong pits two 19th-century magicians, Alfred Borden (Christian Bale) and Rupert Angier (Hugh Jackman), against each other in a bitter battle for supremacy. Terrible consequences loom when the pair escalate their feud, each seeking not just to outwit — but to destroy — the other man.
​
THE CAST – Hugh Jackman, Christian Bale, Scarlett Johansson, Michael Caine, Rebecca Hall, Andy Serkis & David Bowie

As much as I don’t want to come off as cliched, writer/director Christopher Nolan pulled off some sort of a magic trick in the filmmaking world when he and his brother/co-writer Jonathan Nolan decided to adapt Christopher Priest’s magician novel for the screen. The opening line of the film is “Every great magic trick has three parts or acts.” These acts are called “The Pledge,” “The Turn,” and “The Prestige.” Nolan carefully lays out for the audience, via voiceover narration, exactly what these three acts mean. He then proceeds to construct his dark and mysterious film in exactly the same manner. The result is one of the most mesmerizing films to come along in awhile as far as story structure goes – and this is coming from the man who brought us the wonderfully reverse chronological film “Memento.”

It is the end of the nineteenth century in London and showman magician Robert Angier (Hugh Jackman) is in a professional rivalry with the less entertaining, but still talented magician Alfred Borden (Christian Bale). What starts off as a game of one-upmanship takes a turn into the form of tragedy for Angier. Aided by his Ingenieur – a person who creates the apparatus’ for the magic tricks – John Cutter (Michael Caine), Angier sets off on a personal mission to not only learn Borden’s key secrets through the use of his journal but will enlist the help of a beautiful assistant named Olivia (Scarlett Johnasson) to discredit him in any way he can. Borden however, may or may not have a few tricks up his sleeve in his attempt to outmaneuver Angier and go about living a peaceful lifestyle with his wife Sarah (Rebecca Hall).

“The Prestige” is the kind of small-scale film that harkens back to Christopher Nolan’s roots with films such as “Following” and “Memento” as they deal with similar themes of obsession and paranoia. Angier and Borden are both not what they appear to be to each other and to the audience. The film uses a narrative device of each character reading the other’s journals in hopes to learn their rival’s secrets to their best tricks, but instead gain new found perspective on the other’s motivations and thought process behind their troubled history. It’s disorienting and confusing upon a first viewing, much like how a magic trick is performed. But Nolan manages to make it all come together at the end with a twist that may prove to be too disbelieving for others while some will be impressed by the filmmaker’s ability to fool us.

It’s because of this level of skill in storytelling that Nolan is able to bring audiences back to “The Prestige” for multiple viewings in order uncover it’s many layers and sideshow tactics of distraction. Hugh Jackman gives one of his best performances as the driven yet obsessed Robert Angier who will stop at nothing to learn the truth behind Borden’s secrets. Christian Bale (Although always an interesting actor), fairs less so than Jackman does in this film. Perhaps it is his understatement in many of the film’s quieter scenes (His dialogue is barely recognizable at times) or his unbelievable hair style which is not in fitting with the time period. Either way, both are formidable in their roles here, but with Jackman certainly receiving the showier role of the two.

The supporting cast helps to balance out the proceedings. Scarlett Johansson and Rebecca Hall both do a fine job of playing the two women caught between the two men’s personal rivalry while Michael Caine acts as the moral center of the film (Which he has down to a tee at this stage in his career). There is an odd section in the middle of the film dealing with Nikola Tesla (David Bowie) and his assistant Mr. Alley (Andy Serkis playing a role that doesn’t require a mo-cap suit) that starts to push the film into the realms of improbability through the use of science as a tool for magic. It would aid the film greatly if these side characters got a proper conclusion as they do take up a good chunk of the film. However, they disappear unceremoniously before the third act of the film takes over with Angier using their newfound discoveries to help him in his glorious new magician show for all of the world to see.

So while “The Prestige” tackles it’s theme of obsession very well, there are still a few minor hiccups along the way. The way the Nolan brother’s screenplay unfolds may only serve to confuse a segment of viewers while others will be captivated and enthralled by the unraveling mystery at play here. The film’s production design and visuals (Gorgeously shot by longtime Nolan collaborator Wally Pfister) are all working in service to the small scale story of two once friends who become locked in a competition that takes a turn for the darker the deeper the characters go down the path of obsession. It’s only when the story extends far beyond the laws of the normal world and attempts to convey what true magic really is that the film risks losing the audience. It’s another reminder that character is what drives a story forward, not fantastical plot elements. But Nolan (Ever the filmmaking magician if there was one) manages to bring it all together at the film’s final act conclusion. He knows very well that “The audience knows the truth: the world is simple…but if you could fool them, even for a second, then you can make them wonder.” “Voila!” indeed Mr. Nolan. Bravo!