The Golden Globes: Does Having Two Acting Nominations Help To Win One? 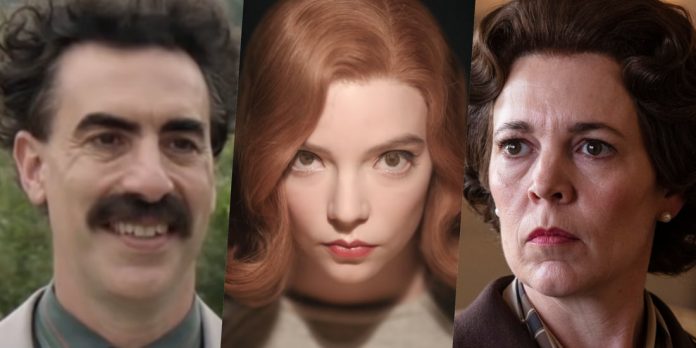 While most of the world had a pretty bad year, a few performers had a great year, at least professionally, and received multiple Golden Globe nominations for their work. Three performers this year received two acting nominations: Sacha Baron Cohen for Best Comedy/Musical Actor for “Borat Subsequent Moviefilm” and Best Supporting Actor for “The Trial of the Chicago 7;” Olivia Colman for Best Drama TV Actress for “The Crown” and Best Supporting Actress for “The Father;” and Anya Taylor-Joy for Best Comedy/Musical Actress for “Emma.” and Best Limited Series/TV Movie Actress for “The Queen’s Gambit.” Will they walk home double-empty-handed or with at least one trophy?

Being double nominated isn’t a new thing, but the performers have had mixed results in the past when it came to getting a win. In 2019, Regina King and Amy Adams both received two nominations for their respective work in both television and film but only King went home a winner that night for her work in “If Beale Street Could Talk.” In 2014, Mark Ruffalo and Bill Murray also received two nominations but the HFPA sent them both home empty-handed. Or if you’re Helen Mirren (2006) or Kate Winslet (2008), you can go home a double winner!

Olivia Colman is currently one of the Hollywood Foreign Press’s favorite actresses with three wins in her past three nominations. But this year, she finds herself in a precarious situation where she could leave without a prize. For her final season of “The Crown,” she’ll need to hold off her costar Emma Corrin and her breakthrough performance as Princess Diana. But if that wasn’t enough of a problem, only Claire Danes for “Homeland” (2011-2012) was able to win Best Drama TV Actress back-to-back. But the universe could’ve thrown Colman a bone in the Best Supporting Actress race where the “presumed” frontrunner, Amanda Seyfried (“Mank“), was snubbed at the SAG Awards, suggesting that maybe the love for her isn’t as strong as we previously thought. This could impact Seyfried’s chances of winning the Golden Globe, leaving the door open to award Colman her fourth Globe. However, with no voting overlap between the SAG membership and the Hollywood Foreign Press Association, perhaps Seyfried is still a strong contender for the win considering “Mank” also has the most nominations on the night.

Next up is Taylor-Joy, whose two nominations will most likely end with a win. She started the year off strongly with her nominated performance in “Emma.” But it’s her work in the hit Netflix series, “The Queen’s Gambit,” which made her a megastar. It’s a definite possibility that her work in “The Queen’s Gambit” helped her land her nomination for “Emma.” against some stiff competition. She is also the ingenue-type that the Globes love to anoint as a new star. While Anya Taylor-Joy has been delivering stellar work since her raved debut in “The Witch,” this will most likely be the moment where the still-young actress finally arrives on the global stage in a significant way.

​Then there’s Sacha Baron Cohen, a past winner for the original “Borat” (2006) film. He has a legitimate chance of going home a double-winner, even taking into consideration the Hollywood Foreign Press’s preference to spread the wealth around. But if he had to choose, I suspect he’d prefer to win Best Supporting Actor, as that could make him the frontrunner to win the Oscar. This win is a strong possibility as “The Trial of the Chicago 7” is one of the Best Picture Drama frontrunners and a win for Sacha would help its overall haul.

At least two of the performers should go home a winner, but they all have one thing in common that could become a problem: At least one of their nominations is for a Netflix production. The HFPA may be choosy as to how many awards they choose to give out to the streaming service and this could be problematic for all three of the performers. Or maybe, Netflix will have a solid night after dominating much of the entertainment landscape in a deprived COVID-19 infested year.

We also must not forget Leslie Odom Jr., who is in a unique situation because his two nominations don’t come from just acting roles. He is nominated for Best Supporting Actor for his work as Sam Cooke in Regina King’s directorial debut, “One Night In Miami.” But he is also nominated in the Best Original Song category for the film’s closing credits track, “Speak Now.” Could he possibly win both? One over the other? Or lose both? He is currently favored to win the Song category much like Lady Gaga won for her song “Shallow” from “A Star Is Born” over her acclaimed performance in the Best Actress category. Could a similar situation be popping up here for the former “Hamilton” star? These are all scenarios we need to think about when making our Golden Globe predictions this week.

Which of these three actors do you think will win at least one award on the night? Do you think any of them will be a double-winner? Let us know in the comments section below or on our Twitter account. Also be sure to listen to some of the NBP Team’s Golden Globe predictions here.