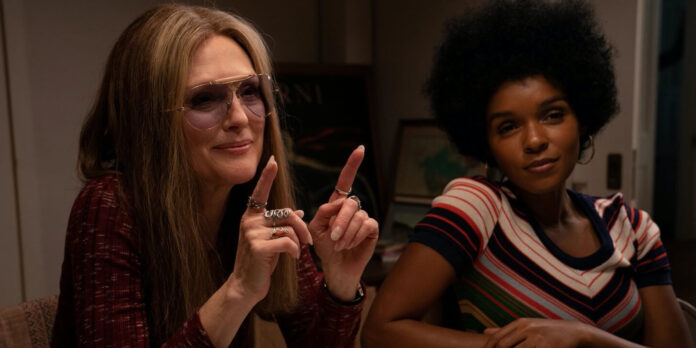 THE STORY – The story of Gloria Steinem — from her childhood in 1940s Ohio to her leading role in the women’s liberation movement.
​
THE CAST – Julianne Moore, Alicia Vikander, Timothy Hutton, Lorraine Toussaint, Janelle Monáe & Bette Midler

9/30/2020
By Casey Lee Clark
​
​​​​It is a pleasant surprise that in a taught and stressful election year (among many other things) that 2020 has also become the year of Gloria Steinem on screen, through the limited series “Mrs. America” and Julie Taymor’s latest film “The Glorias.” I’ve had the embarrassment of riches of having seen this film twice, once at Sundance and another viewing very recently, with watching the entirety of “Mrs. America” in between. It is impossible not to compare the two in how they portray specific events and characters, especially in how each portrays Gloria herself. With “Mrs. America,” you get a more concentrated story revolving around the Equal Rights Amendment and the various figures surrounding it. You get an in-depth look at both sides of the argument, Conservatives versus women’s lib. But, being a limited series, it is obviously more hours, more time spent with these characters to properly flesh out their lives and stories. This major difference is apparent in some of the figures the two works share, most notably their respective portrayals of Bella Abzug, who on the series is given complexity and vulnerability by Margo Martindale versus Bette Midler in the film who, while delightful and fun, is more brief and one-note.

However, with “The Glorias,” you obviously get much more time spent on learning about Gloria Steinem specifically rather than the traditional ensemble. We learn about her background, her family and childhood, and the various stages of her career. We also get a much longer stretch of time portrayed on screen. With Julie Taymor’s signature direction and vision, the film obviously takes many creative leaps and showcases powerful moments in bold ways. But, the film is certainly not without its faults, and it is hard not to compare it to the more grounded nuance of “Mrs. America.” “The Glorias” is messy in its structure, disjointed in its surrealism, and certain aspects (mainly its poor CGI) leave little to be desired. And yet, somehow, it is still engaging, moving, and undoubtedly inspiring.

As I said before, Julie Taymor has a clear visual style. There is no denying that she is a true artist and I have been a big fan of her work in the past, but those more bold and unique choices felt all over the place in this film and incredibly disjointed. Borrowing inspiration from the title of Steinem’s memoir that the film is based on “My Life on the Road,” the film takes the approach of framing the film around a bus traveling through America and through Gloria’s life, with the various actresses that play her throughout the film being the riders. They’ll comment on parts of the story currently being told and will even have conversations with one another, sometimes the younger ones asking their older counterparts if they did the right thing or if they had any regrets. These moments play out beautifully and are actually a really clever way of looking at someone’s life in a biopic and allowing that person to properly reflect on their life, but they didn’t feel like they happened frequently enough or that this concept was fully realized. Honestly, it felt like something they came up halfway through writing the script and just added it in, as the bus plot doesn’t really come to fruition until a bit into the runtime.

The film feels as though it is wrestling with being a proper and true biopic and having these surreal moments and storytelling devices. The more surreal moments come rather randomly and feel scattered throughout the film rather than a clear cohesive vision. It comes across like a bit that has yet to be fully realized. The CGI used in these sequences is also quite bad, sometimes even feeling unfinished. It always looks too shiny, artificial, and fake to either be taken seriously or be marveled at. Obviously, these scenes aren’t supposed to appear realistic, but the look of them feels off and would’ve probably benefited from a better combination with practical effects. The only sequence I enjoyed visually was an entirely animated bit depicting the cover of the first issue of Ms. magazine, appearing reminiscent of sequences in her film “Across the Universe.” But, even the black and white of the bus scenes felt too fuzzy and bright, giving off the impression of being digitally created rather than filmed that way.

Another major characteristic of the film is having multiple actresses play Gloria, mainly Alicia Vikander for ages 20 to 40 and Julianne Moore for age 40 onward. This ultimately ends up being one of the film’s biggest problems. The actresses do not look or sound alike as the character, making the major transition from one to the other very jarring and it ends up making it difficult to connect to her in the way you would want. They of course do not need to look alike, but if you are going to commit to that format (á la “I’m Not There” or something), perhaps add in another actress or two and make that the point of seeing this great woman and feminist icon played by multiple women. We don’t get quite as much time with her as a child or teen for those performances to truly count in the way that I am talking about. At around the middle point in those late-30s early-40s years when it goes from one to the other, Moore comes across as a bit too old while Vikander feels too young and it makes the portrayals less believable, especially as none of the other actors throughout the film change besides makeup.

The film also doesn’t give you much to work with in regards to these performances. Vikander is perfectly good until she opens her mouth, with her American accent seeming way too weird and unnatural to not stand out in every scene she is in. Julianne Moore, one of our finest actresses, isn’t given nearly enough to do. She doesn’t fully come into the film until halfway through, and the script just underwhelms in what you would expect it to give her or even what you expect when you hear of her headlining a Gloria Steinem biopic. There is nothing inherently wrong with either of these performances and a lot may have to do with Steinem’s own more quiet and stoic nature in real life, but don’t expect to be adding either of these performances to our actress ballots. The film does allow you to see the various figures in Gloria’s life that shaped her into who she is, such as her mentally broken and unstable mother (Enid Graham) and her eccentric father, played deliciously by Timothy Hutton in one of his best recent performances. You also encounter the eclectic mix of other female activists that Gloria fought with, most notably for me Lorraine Toussaint as Flo Kennedy, a role she comes across as being born to play.

I’m coming across as negative on this film, but it is a genuinely enjoyable watch. It is a bit overlong, but I found it to be an entertaining breeze to get through that I would certainly watch again. Even with its faults, I’m always engaged throughout the runtime and eager to learn Gloria’s story. Is the major plot of this film something that could also be easily told through a documentary? Sure. However, I do think that when the film works it can be quite powerful and inspiring. An aspect that I have not brought up yet but greatly appreciated was the film’s emphasis on intersectional feminism, showcasing the various women of color whose causes Gloria helped to support, rather than coming from a solely white feminist angle. The moments of sexism, as well as those of female camaraderie and solidarity, felt incredibly relatable, and its ending will really stick with people. Through all its faults and mistakes, “The Glorias” did its job in one way: it got me fired up.