“I CARRY YOU WITH ME” 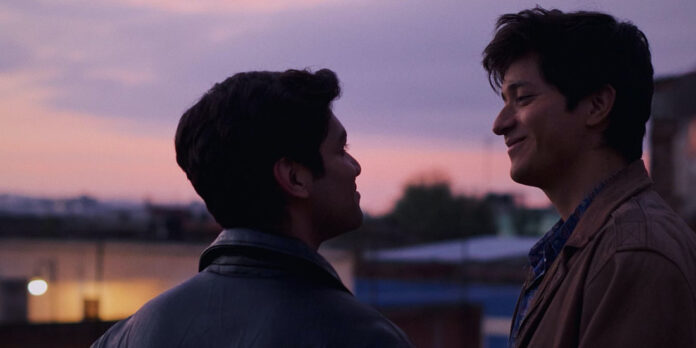 THE STORY – Ambition and societal pressure propel an aspiring chef to leave his soulmate in Mexico and make the treacherous journey to New York, where life will never be the same.
​
THE CAST – Armando Espitia, Christian Vázquez, Michelle Rodríguez, Ángeles Cruz, Arcelia Ramírez & Michelle González

In the opening sequence of “I Carry You with Me,” the wide-open blue-hued country of Mexico is contrasted with the more yellow-tinted interiors of the New York City subway. Throughout, Mexico is shot by Juan Pablo Ramírez like something out of a dream – all gorgeous magic hour sunsets, charming multi-colored old buildings and strikingly-lit clubs. The strong colors and somewhat shadowy cinematography bring to mind a memory of a lover that maybe never was, like a Mexican version of Wong Kar-Wai’s “In The Mood for Love.”

​In voice-over, Iván talks about a dream he has about returning to Mexico as his younger self. As we see his younger self in Puebla City in 1994 – a young man with a culinary degree scraping to make a living by washing dishes and fixing toilets – we may at first wonder why a life so seemingly unfulfilling is being shot with such hazy beauty, but before long, the truth reveals itself: The two loves of Iván’s life are there. First is his son, for whom he does everything and only gets to see once in a while when his ex-wife lets him. The second is the man he meets at a secret gay club, Gerardo. Iván and Gerardo fall for each other instantly, but each man has his trepidations about the relationship. Eventually, Iván and his best friend Sandra decide to illegally cross the border to the United States so they can be truly free and Iván can work at his chosen profession. Gerardo doesn’t go with them. As the film goes on and Iván’s present-day life in New York becomes more intertwined with his past – both in Mexico and in the U.S. – the film almost becomes a (very low-key) thriller: Will Iván and Gerardo ever see each other again? If they do, will either of them be able to avoid deportation? Will Iván ever see his son again?

Ewing, making her solo narrative feature debut, teases out the answers to these questions in ways that will make you hold your breath for long periods of time, revealing the answers in surprising ways that are sure to evoke a gasp or heartfelt sigh of relief. But despite the strong filmmaking, there are screenplay lapses in the first half of the film that prevents us from becoming fully invested in these characters and their journeys. The story of Iván and Gerardo’s relationship is told in snippets, moments of time captured as moving portraits. They’re beautiful images, to be sure, but by the time Iván goes to America, there’s little context for how long they’ve been together and just how deep their relationship has gotten. But when the story fully catches up the present day, Ewing’s documentarian instincts take over and the film really starts to build a powerful statement about the promise of America and how that promise is cracking more and more each day.

The hybrid documentary/narrative feature nature of “I Carry You with Me” is rather unique. Unlike other documentaries that play around with the form, this feels much more like two films about the same subject fused together. Neither half suffers for it, but the whole does; it is impossible to shake the feeling that both the documentary and the narrative feature would be better on their own than this hybrid version that combines them. The former would give the audience a stronger bond with the characters, the latter could apply with a more heavy style to fully capture the elliptical feeling of the immigrant experience.

Reservations aside, “I Carry You with Me” is still a lovely piece of filmmaking. The bone-deep empathy it gives to its characters is sorely missing from America right now and the love that permeates every frame of the film does transfer to the audience by the end. It manages to both celebrate the freedom America offers (a sequence capturing Gay Pride in mostly still photos is beautifully and joyously done) and criticize the arcane, at-times arbitrary, nature of the country’s citizenship and deportation laws (the last act of the film hinges on Iván’s longing to see his son as the frustrations pile up on both sides of the border). Through it all, the cinematography dazzles, pulling you as far as it can into the worlds of Puebla and New York. The fact that it’s a true story makes it all the more heart-warming and heart-breaking simultaneously. By the time the film reaches its conclusion, it feels like a film that is very much needed at this particular moment in time. This is the kind of film that makes one’s heart grow three sizes while watching it and considering the amount of Grinch-like behavior in the United States in 2020, it’s difficult to think of something more necessary.