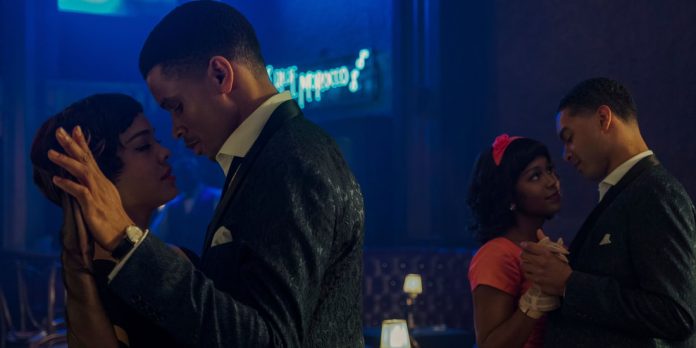 ​Moviegoers will be treated to “Sylvie’s Love” this Christmas. The romantic drama starring Tessa Thompson and Nnamdi Asomugha has secured a December 25th release date on Amazon Prime. “Sylvie’s Love” was acquired by the streaming platform after its premiere at the Sundance Film Festival in January, and it currently holds a 100% rating on Rotten Tomatoes.

The film is set against the backdrop of 1950s New York. Sylvie (Thompson) is a record store employee who wants to break into the competitive world of television. She pines for the return of her husband from the Korean War, but a chance encounter with a saxophonist named Robert (Asomugha) throws her life into a tailspin.

“Sylvie’s Love” covers decades in the lives of both characters and details the personal sacrifices they make in the service of their professional dreams. The film boasts an impressive supporting cast that includes Aja Naomi King, Jemima Kirke, Tone Bell, Lance Reddick, and Eva Longoria. Thomson and Longoria also serve as executive producers.

Eugene Ashe wrote and directed the romantic drama. Ashe is a former Sony Music recording artist from Harlem who has performed on countless film soundtracks like “Loving Jezebel” (1999) and his own directorial debut “Homecoming” (2012). He’s a member of the Writers Guild of America East Diversity Lab at Columbia University.

According to The Hollywood Reporter, “Sylvie’s Love” was among Amazon’s biggest Sundance acquisitions. The film was sold in the high seven figures alongside festival standouts like the Paul Bettany family drama “Uncle Frank” and the Phyllida Lloyd character study “Herself.”

What do you think of “Sylvie’s Love” getting a Christmas release? Do you think Thompson will be able to generate some award buzz? Let us know in the comments section below or on our Twitter account.
​
You can follow Danilo and hear more of his thoughts on the Oscars and Film on Twitter at @DaniloSCastro