“THE GIRL AND THE SPIDER” 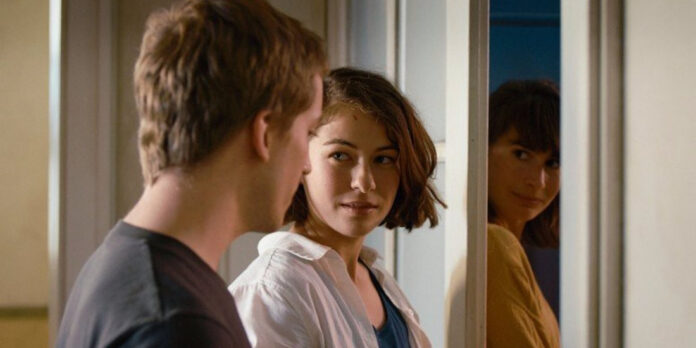 THE STORY – Lisa is moving out. Mara is left behind. As boxes are shifted and cupboards built, abysses begin to open up and an emotional roller coaster is set in motion. A tragicomic catastrophe film. A poetic ballad about change and transience.

10/13/2021
​By Dan Bayer
​​
​Lisa (Liliane Amuat) is moving. She seems excited about it, but her roommate Mara (Henriette Confurius) does not. In fact, judging from her epic side-eye and lightly destructive tendencies, Mara seems quite upset about it, despite having made a blueprint of Lisa’s new apartment to help her decide where her things should go. In the course of moving, the two girls meet Lisa’s new neighbors (including a single mother with a young daughter and a baby), passive-aggressively deal with Lisa’s mother, work with the handyman they’ve hired to help with the move, and host a goodbye party with their current neighbors. This is the plot of Ramon Zürcher’s “The Girl and the Spider,” although the story is a lot more complicated than that. How much more complex is difficult to say, as whole histories are conveyed through sideways glances, symbolic dreams, and things left pointedly unsaid.

This style of storytelling has been a favorite of art film auteurs for decades, although it’s seen more rarely these days, and one’s reaction to “The Girl and the Spider” is entirely dependent on one’s taste for that style. Suppose a group of Europeans standing around half doing things and half talking in elliptical dialogue that suggests far more than it actually says isn’t your thing. In that case, this film may feel more like an endurance test (although at 99 minutes, at least it’s a relatively short one). But if this style intrigues and stimulates your mind, then this is as good an example of this style as has been seen in recent years.

Zürcher, who co-wrote and co-directed with his brother Silvan, keeps things moving at a good pace, consistently inserting some new character or point of conflict right when a scene starts to sag. Just watching these characters bounce off of each other can be entertaining – the flirtation between handyman/mover Jurek and Lisa’s mother is particularly enjoyable, perhaps especially when Lisa rolls her eyes in disgust and Mara tries to break them up before they’re even an item – and the sharp editing (by Zürcher and Katharina Bhend) helps a lot with that. The tight, precise cinematography also helps, always pulling us toward the character dynamics even when the film seems intent on keeping us as distanced observers. While almost certainly a by-product of the very tight apartment sets, the probing close-ups force us to focus on the performers’ faces, and the entire ensemble exhibits admirable control over even the tiniest changes of expression.

What the Zürchers are getting at is the casual cruelty we inflict on each other in moments when we feel hurt in some way, and how that only leads to further, deeper hurt in both ourselves and others. The cast is capable of delivering some very affecting moments. Still, when so much of their relationships is kept deliberately opaque, it becomes even more challenging to connect with anyone. This is the point, of course, for the audience to be a fly on the wall, nodding and saying, “ah, yes,” with each new semi-profound statement. “How easy it is to hurt others when we are hurting! How unnecessarily cruel we can be to each other!” This is true, and “The Girl and the Spider” weaves quite the tangled web between its characters. But while the unspoken truths that connect them intrigue for a while, that intrigue turns out to be all the film has to offer, and it’s just not enough to build a film on, even a film as technically well-made as this.