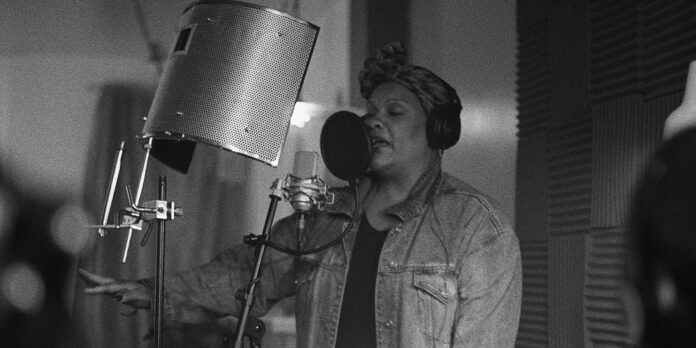 THE STORY – Radha, a down-on-her-luck NY playwright, is desperate for a breakthrough before 40. But when she foils what seems like her last shot at success, she’s left with no choice but to reinvent herself as rapper RadhaMUSPrime. The Forty-Year-Old Version follows Radha as she vacillates between the worlds of Hip Hop and theater on a quest to find her true voice.
​
THE CAST – Radha Blank, Peter Kim, Oswin Benjamin & Reed Birney

​Once in a blue moon, you watch a film and know that it’s a special moment. That this film is the beginning of something. That you are watching a star being born. Such is the feeling when watching Radha Blank’s “The Forty-Year-Old Version.” Blank is not only the film’s star, but also its writer and director, and such a confident, well-crafted multi-hyphenate debut has not been seen in quite a while.

Loosely based on her own life, the film follows Radha, a playwright living in Harlem who makes money running a high school drama program. She was named to a “30 under 30” list a decade or so ago but hasn’t been able to get a play produced since, much to the chagrin of her put-upon agent and long-time best friend Archie (Peter Kim). Radha’s mother passed away a little while ago, and her brother is trying to get in touch with her to clean out their mother’s apartment. Reticent to meet the demands of a very white theatrical producer who claims her new play isn’t “black enough”, Radha turns to hip-hop and decides to meet D (Oswin Benjamin), a producer in Brooklyn, to make a mixtape. It doesn’t go well at first, but when Radha finally steps up to the mic, the moment is electric. Her rhymes and style take the quiet D by surprise and unlocks something in Radha as well.

“The Forty-Year-Old Version” has a lot of different themes and stories percolating around its two-hour running time, and the most surprising thing is that it manages to do right by all of them. So right, in fact, that you could say that the film is “really” about any of them, and have more than enough evidence on hand to make your case. But being about all of them is the point. The film is a love letter to hip-hop, to art, to theater, to outsiders, to New York, to black people, to black women. It is a portrait of grief, middle age, and finding oneself. It is, in short, about life, and celebrating it in all its messy glory. That Blank’s screenplay manages to give equal weight to all of these things is impressive enough, but her direction is just as strong, providing memorable moments throughout the film that give a spotlight to everything she’s commenting on.

Blank herself proves to be an ideal protagonist. Her style is completely unique, and she is able to wring humor out of seemingly every situation with only a look. She makes it clear in her portrayal that she knows when Radha is being ridiculous, or self-serving, or hypocritical, even if Radha herself isn’t aware. Her embrace of the character, warts and all, is refreshing, and what’s even more refreshing is that she embraces every single character in the film in the same way, no matter how small the part. Even the white producer (Reed Birney) and director (Welker White) that take over her play are seen fully by Blank – their whitewashing of her work and “understanding” of the blackness she presents in it clearly coming from a well-meaning (if self-serving) place.

Even if the theater-based storyline can occasionally feel a little too insider-y, Blank’s well-drawn characters and sharp direction still make it entertaining to watch. Where the film really shines though, is its journey to the underground hip-hop scene. Contrasting it with the more upper-crust (and more white) world of theater throws both worlds into sharp relief, showing the artifice and potential for genuine self-expression and reflection in each. Radha and D’s relationship could make a great full romantic comedy in and of itself, with Blank and Benjamin’s tremendous chemistry making the characters jump off the page. A late-film trip to see female battle rappers is an obvious highlight, and a perfect example of Blank’s generosity as a director: Not only does each rapper (all of whom are non-professional actors) get a full showcase of their talents, but Blank also manages to spotlight the growing relationship between Radha and D.

Perhaps the strongest element of Blank’s direction is her sense of place. Each setting in the film feels authentic – largely because it was shot on location in New York – but more than that, Blank is attuned to how different places feel to different people. The use of black & white 35mm film gives the film a throwback ‘90s indie feel that places it in the tradition of Spike Lee, Leslie Harris, and Cheryl Dunye, filmmakers that made their characters’ environment just as much a character as the human beings that populated it. Blank and cinematographer Eric Branco use lighting to get at how the different spaces Radha enters make her feel, making her skin look lighter or darker depending on what face she’s showing to those around her. In this way, the film gets at what it’s like to be a black person in a white world in a visual way, heightening the feeling present in Blank’s screenplay and performance. The cinematography also works with the production design to highlight or obscure things based on Radha’s relationship to the space – D’s apartment studio is dark and smoky the first time Radha enters, D himself barely separable from the atmosphere. But each time she returns, and gets closer to D, we can see more. In the theatrical storyline, the bright lights of the rehearsal room for her play throw her discomfort with the situation into sharp relief, highlighting everything wrong with both the play as she wrote it as well as her white artistic partners’ interpretation of it.

The basic plot of “The Forty-Year-Old Version” is a rather familiar mid-life crisis story. While this could lead to the film feeling rote and uninspired, Radha Blank’s distinctive voice comes through loud and clear, making the film feel like its own thing. It may be the same ol’ lyrics, but they’re being sung by a new voice and set to a different melody. The film announces Blank as a force to be reckoned with both in front of and behind the camera, a unique new talent with an uncommon grasp of storytelling in all its forms. By the end of this film, you’ll have fallen in love with her and the character she plays, ready to watch her find her voice again and again. “The Forty-Year-Old Version” is a bravura debut, one that will hopefully lead to more opportunities for its multi-talented creator.