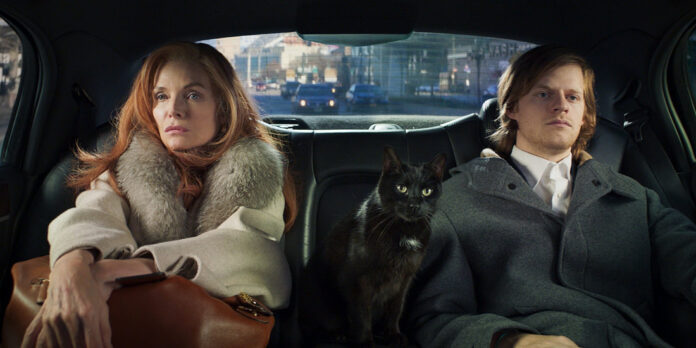 “I’m puzzled and this is what’s puzzling me.”

“French Exit” is exactly the kind of film Woody Allen wishes he could still make in 2020: A Paris set comedy-drama focusing on the mental breakdown of a female New York socialite and widow with filmmaking that doesn’t distract from the characters or plot. The comparisons are endless and yet Azazel Jacobs’ film is still its own beast entirely. On the surface, it’s easy to see why one might have certain expectations heading into “French Exit,” especially those familiar with the novel which it is based on, but the final product is completely unexpected. Perpetually bizarre and absurd, it’s often very humorous but also equally aimless and tedious in terms of its execution.

Frances Price (Michelle Pfeiffer) is a 60-year-old Manhattan widower who has never worked a day in her life. Her late attorney husband has been dead for 12 years and the money he left behind for her has finally run out. Facing insolvency, she sells what she needs to and takes her remaining cash, her directionless son Malcolm (Lucas Hedges), and her cat Small Frank (who may or may not be her reincarnated husband) to Paris France, where she plans to spend her remaining days. When she arrives, her inner circle unexpectedly starts to grow as new people come into her life and remind her of the importance of human connection and that life might be worth living.

Adapted from his own novel, Patrick deWitt imbues his screenplay with rich characters, literally and figuratively, who are undergoing a drastic change in their lives. When all the money is gone, all they will have left is each other and in that vein, “French Exit” is a story about a mother and son opening up to each other and to those around them who they may have previously looked down on and shut out of their lives completely. All of the pieces are in place for a heartwarming story, where we’re witness to two dramatically affecting character arcs for Frances and Malcolm. However, the direction by Azazel Jacobs seems determined to undermine the conventional structure of how we expect this kind of story to play out, tonally. Nearly every line of dialogue has something off about it that feels unsettling, thus disengaging us from the story deWitt is attempting to tell.

Both Frances and Malcolm are intriguing characters with a great deal of mystery surrounding them. Michelle Pfeiffer is really at her best here, playing a self-absorbed upper-class woman who is dealing with depression. Every line delivery by her is so delicious inflected, filled with dejection and smug entitlement. Pfeiffer knows exactly what notes to hit in her performance in order to make Frances repellent yet still deeply empathetic. Frances has come to Paris to die and knows that she will eventually kill herself when her money runs out. Since she knows it will run out soon anyway, there’s no need to prolong the inevitable, so she spends the money recklessly. It’s a beguiling character, given much-needed depth by Pfeiffer’s outstanding performance, even when the tone of the movie around her threatens to ruin her work.

I imagine reactions to Lucas Hedges’ performance will be divisive as he gives Malcolm a monotone and reserved demeanor that can be offputting and at odds with Pfeiffer’s more ornate work. Some will love that Hedges is delivering something unique and different compared to his recent work but I personally found it cold and difficult to connect with. At one point, in regards to a hilarious innuendo gag (which I dare not spoil here), Frances asks Malcolm “But why would you want it cold?” to which he replies, “That’s the mystery.” And maybe that’s the brilliance of Hedges’ work but for me, there were certain questions I found myself asking about his character that by the time we reached the film’s ending, I was left unsatisfied by how mysterious I still found him to be.

Outside of the film’s two leads, I want to shoutout Valerie Mahaffey as Mme Reynard, a lonely woman who befriends Frances and Malcolm, much to Frances’ dismay. Every scene with her is a hilarious delight as she tries to win Frances’ favor. The other members of the supporting cast all receive a scene or two to showcase their talents but their joint presence in the film’s third act, as they all cram together in Frances’ apartment, feels inauthentic and does not provide enough narrative payoff to the film’s aloof plot. And for those who were excited about the idea of Tracy Letts playing the voice of the cat that journeys with Frances and Malcolm to Paris, prepare to be disappointed as this is not an anthropomorphizing effort. Instead, Danielle Macdonald (“Patti Cake$“) plays a fortuneteller that Malcolm meets on the cruise ship to Paris, who serves as a medium, thus allowing the voice of Frank to speak to Frances and Malcolm. But in order to find her, Frances needs to hire a private detective (Isaach De Bankole) to track her down. If this is all sounding silly, that’s because it is and it drastically brings the film down with its irregular storytelling.

In what should’ve been a new camp dramedy in the vein of classic Woody Allen, has instead turned out to be a mixed bag for me. At one point Frances says that a cliche is “so fine and thrilling that it has grown old in its hopeful retelling.” While I admire that Azazel Jacobs decided to inject this story with its own distinctive tone, a cliche is a cliche for a reason and they’re proven to work from time to time. The story was already filled with enough absorbing characters and working with an uncomplicated narrative structure that there was no need to undercut every scene with such strange singularity. If you’re on the film’s wavelength, good for you! We can probably at least all agree that Michelle Pfeiffer is excellent but after one too many missed opportunities, I was so badly wanting an exit from “French Exit.”