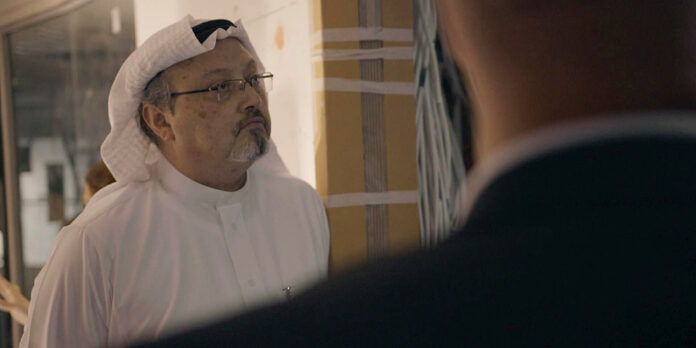 THE STORY – When Washington Post journalist Jamal Khashoggi disappears after entering Saudi Arabia’s consulate in Istanbul, his fiancée and dissidents around the world are left to piece together the clues to a brutal murder and expose a global cover-up perpetrated by the very country he loved.

The world of politics is always a subject that is ripe with intriguing topics to explore. What makes this landscape particularly interesting is the variety of stories that’s available to be told. Sometimes there are major events that have been burned into the public consciousness that have layers of complexity to be discussed. Other times, there are moments in history that have been given little fanfare and are now provided the harsh spotlight of recovery. “The Dissident” does examine an incident that commanded global attention in a significant way. It also uses this discussion to bring about a larger commentary on the forces at play that feed off oppression and the dedicated groups willing to speak out and fight back.

The focus of the story here is the murder of Jamal Khashoggi, a Saudi journalist whose assassination at his country’s consulate in Istanbul drew worldwide scrutiny and serious concerns. The events that both preceded and followed his death are meticulously traced, which includes his role as an important voice to highlight the injustices of an oppressive regime as well as the steps taken to cover up such a gruesome crime. In addition to this exploration, another rebellion is taking place with a group of younger, organized dissidents who find innovative ways to protest and spread awareness of their cause. Omar Abdulaziz is one of these main activists who collaborate with Khashoggi, and he is also on a path that is just as passionate and dangerous.

Bryan Fogel’s first foray into the world of documentaries was 2017’s “Icarus,” a harrowing portrait that garnered him critical acclaim and an Academy Award. His sensibilities as a filmmaker are particularly strong and he creates a dynamic and engaging perspective that brings a sense of energy to his storytelling. The web of insidious political influences is shown with a menacing force, which makes the drama feel all the more heightened and the tension palpable. Fogel continues to show his ability to create a striking piece of work that often frames its point of view as if it were a fictionalized narrative and, often, it is effective in unfolding a compelling tale.

At the same time, the direction has a habit of steering too much in the habit of attempting to make one forget they are watching a documentary. In doing so, some of the choices become bold to the point of distracting in how over-directed it comes across. One particularly feels it in animated dramatizations that are unwarranted and imagery that feels overly exaggerated in its attempt to create suspense. Things also aren’t helped by a jumbled story that cuts between Khashoggi and Abdulaziz’s plotlines and particularly leaves the latter to feel more tangential to overall scope. One also gets this sense when the personal issues of Khashoggi are revealed. While his fiancée is an important element of this drama, her time on screen is limited and hardly impactful.

Still, the true success of this film lies not necessarily in the specific details it showcases but rather in the commentary of the many voices coming together to clash against a dictatorial system. There’s an inspiring message here about how a persistent group can come together against the forces that demean and silence those who would dare to question authority. The power that is available to the masses that struggle against authoritative institutions to create a freer and more democratic world is always a strong lesson to take to heart. The passionate and tireless efforts made, at great personal cost, is not lost on any viewer. Those stakes make the journey all the more worthwhile to discover. Even when the narrative itself is not totally cohesive, the underlying messages are quite captivating.

There is no doubt that “The Dissident” has a fascinating story to tell. It is filled with intrigue as it dissects a provocative mystery that is merely the foreground for larger political forces at play. Admittedly, some of the directorial choices come across as overzealous in their presentation, which distracts from the impact this information could potentially provide. While the events as told could also have been streamlined, one still finds an effective look into the significance placed upon those who seek justice and liberation against a power structure that does whatever it can quell any dissent. The film is another example that takes important true events and shows how they’ve left a momentous imprint on the world stage.