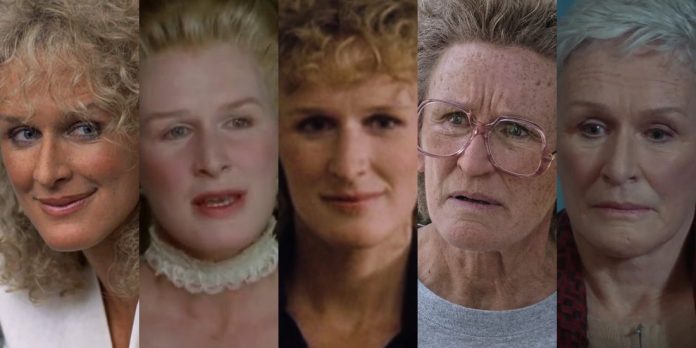 When we think of performers that are overdue for Oscar love, none is as prominent as the masterful Glenn Close, an actress who has delivered consistent excellence for over 40 years on stage and screen. With seven Oscar nominations to her name, Close has been in the conversation for decades. Yet that win has long eluded her, even when it seemed imminent. This year, the veteran actress is back in the fold for her dynamic work in “Hillbilly Elegy.” But what brought her to this moment? What does the trajectory of Glenn Close’s remarkable career look like as she looks to add another nomination and potential win to her record? Let’s take a look back at the performances and nominations of an acting legend.

While most mainstream audiences are quick to associate Glenn Close with her film career, she began her career in the theatre like many actors. After studying at The College of William and Mary, Close went to Broadway and earned her first professional nomination for her role in the musical “Barnum” in 1980. Her Tony-nomination for Best Featured Actress in a Musical catapulted her to the world of film, where she would go on to make her screen debut in 1982’s “The World According to Garp” alongside Robin Williams and John Lithgow. As a true screen ingénue, she earned her first Academy Award nomination for “Garp,” portraying Jenny Fields, the feminist icon and mother of Williams’ T.S. Garp. Though she lost the Oscar to Jessica Lange for “Tootsie,” Glenn accomplished a feat rarely duplicated by any fellow performer of her or any other generation: continuous nominations. Close followed up her 1982 Oscar nomination with recognition at ceremonies honoring her work in both 1983 and 1984. For Lawrence Kasdan’s generational defining “The Big Chill,” her second Supporting Actress nomination is what elevated Close from respected performer to household name. As a young parent reunited with college friends after an untimely passing, Close’s Sarah came to represent a generation of college-educated mothers longing for simpler times. As if two wasn’t enough, Close’s third Supporting Actress nomination came for her work alongside Robert Redford in Barry Levinson’s baseball classic, “The Natural.” What is apparent now was still clear nearly 40 years ago: the Academy really likes Glenn Close. But after being recognized for her first three cinematic efforts, Close took her talent elsewhere rather than to go for a fourth consecutive nomination.

Returning to her Broadway roots in 1984, Glenn joined the original Broadway cast of Tom Stoppard’s “The Real Thing.” Stoppard’s masterpiece focuses on the relationship between Close’s Annie, an actress, and Jeremy Irons’ Henry, a playwright, who engages in an affair against a backdrop of extreme consequences. Running well over a year on Broadway, the play was a sensational success, netting a Best Actress Tony win for Close, along with additional prizes for co-stars Irons and Christine Baranski.

Following the Tony win, Close returned to the screen to star alongside Jeff Bridges in the pulpy neo-noir, “Jagged Edge.” While there was no nomination to follow this time, the success of the 1985 film only continued to establish Close as a real household name, less than a decade into her career. Yet it was the next film that truly launched her into superstardom.

Adrien Lynne’s “Fatal Attraction” went on to be every bit iconic as “The Big Chill” and then some as it scared a generation of married men. What made every bit of the erotic thriller so convincing was Glenn’s performance as Alex Forrest, a woman who can’t and won’t let go of an affair she has with a married businessman. What was recognized as unique and daring in 1987 has only gone on to become iconic years later. Close’s performance in “Fatal Attraction” is what young actors use to study the technique over 30 years later. The creative choices and fiery passion she brings to the role is unmatched. Yet, it’s the humanity that really brings it all home. She gives us a reason to care for a character who could have been written off as a monster. Even as Close continued to deliver quality performance after quality performance in the years to follow, she has yet to surpass the heights of “Fatal Attraction” in the minds of many audiences and scholars.

Capping off a tremendous run of beloved 80’s performances, Close’s final nomination of the era came from her work as Marquise Isabelle de Merteuil in Stephen Frears’ “Dangerous Liaisons,” the cinematic adaptation of Christopher Hampton’s “Les Liaisons Dangereuses.” The decade that followed was not nearly as prosperous on the cinematic awards front but it did prove that Close had many tricks left up her sleeve. She reunited with “The Real Thing” co-star Jeremy Irons in “Reversal of Fortune,” playing comatose socialite Sunny von Bülow. Other notable film roles of the ’90s included newspaper editor Alicia Clark in Ron Howard’s “The Paper” and the now-iconic live-action Cruella de Vil in the 1996 remake of “101 Dalmatians.” Yet, the decade’s genuinely great success came from the arena that launched Close’s career, the theatre. In 1992, Glenn won her second Best Actress Tony for her work in Ariel Dorfman’s psychological thriller “Death and the Maiden.” Three years later, she added a third Tony to her mantle, this time for a musical. Close’s work as Norma Desmond in Andrew Lloyd Webber’s “Sunset Boulevard” has become one of Broadway’s legendary performances, giving new life to the character initially made famous by Gloria Swanson in 1950. As the decrepit actress longing for her glory days, Close brings down the house with her haunting “As If We Never Said Goodbye,” which is now a Broadway staple. As if one Broadway run and Tony win weren’t enough, Close continued to play Desmond around the country and even returned to Broadway for a revival in 2017.

As another decade ended, Close found herself at the point that many actresses fear: the 50+ range. Rather than subject herself to poorly developed roles for actresses of a certain age, she continued to reinvent herself, this time with yet another medium. Having dabbled in television with Emmy nominated and winning work in “Sarah, Plain and Tall,” “Serving in Silence,” and “The Lion in Winter,” Close leaped to the small screen with a first for her career in 2005, a recurring series. FX’s “Damages” capitalized on the legal thriller trend by allowing Close to sink her teeth into yet another juicy role. This time in the form of Patty Hewes, a ruthless lawyer that would go on to lead five seasons and bring close two Emmys for Lead Actress in a Drama Series, not to mention additional recognition from the Golden Globes and Screen Actors Guild. “Damages” was a top priority for Close in the 2000s and served as a reminder of just how much of an incredible performer she is.

As the show came to an end in 2012, Close began to transition back into film, scoring her first Oscar nomination in over 20 years for playing the titular character in “Albert Nobbs.” As a female butler posing as a man in the late-19th century, Close’s Albert captures repressed emotion and longing that was so common of those who felt trapped. After a career of showy and over the top characters, this was the rare instance for Close to act more internally. But her return to the Oscars did not end there, as another nomination was to come that decade for the 2018 film “The Wife.” A minor adaptation of Meg Wolitzer’s 2003 novel, Close’s performance as Joan Castleman, a wife looking for credit attributed to her celebrity husband, garnered praise among the best of her career. After winning the Golden Globe and Screen Actors Guild awards, it was predicted that “The Wife” would finally bring Close her long-overdue Oscar. Yet it was not to be as “The Favourite” star Olivia Colman won in one of the more stunning upsets in recent memory. Yet rather than wallow in her loss, Glenn picked up and carried on as she has done throughout her remarkable and unprecedented career.

This year finds the veteran performer in Ron Howard’s “Hillbilly Elegy.” As Mamaw, the tough loving and no-nonsense grandmother of J.D. Vance, Close brings equal measures of levity and heart to an otherwise heavy story. The fact that she is able to convey such natural emotion through layers of makeup and prosthetics speaks to her experience and ability. The race for Best Supporting Actress seems wide open at the moment, but the stars may very well begin to align to recognize a performer who has given so much over the past 40 years. Glenn Close doesn’t need an Oscar to be considered one of our finest talents. But it would be a crime to let her go without one, especially if these awards are truly set on honoring the best of the best. A career of excellence deserves due recognition.

Do you think this is finally Glenn Close’s year? Film Critics may not be showering her with prizes at the moment but how will the industry respond? What movie should she have already won for in the past? Let us know in the comments section below or on our Twitter account.