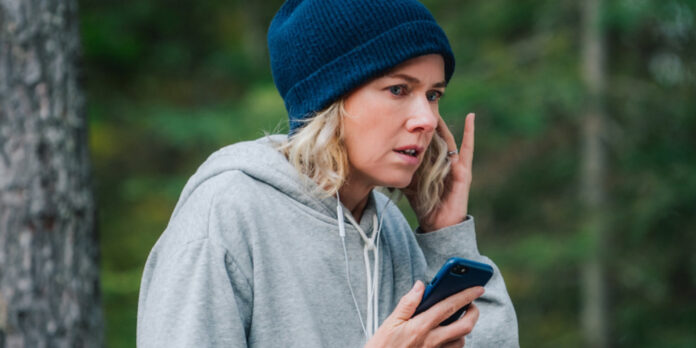 THE STORY – A mother desperately races against time to save her child as authorities place her small town on lockdown due to a school shooting.

Filmmakers walk a tricky tonal tightrope when centering a movie around such somber subject matter as a school shooting. Lean too far into drama, and you risk leaving your audience dreadfully dejected and depressed, too mournful to contemplate whatever message you hoped to convey. That being said, if too much levity is injected into the film, it can also quickly lose sight of the serious topic at hand. Titles like “Mass” and “The Fallout” – which premiered at this year’s Sundance and SXSW film festivals, respectively – have tried their best to thread this needle and do justice to this real-world issue by thoughtfully parsing the perspectives of parents of victims of school shootings or survivors of said events, but not every creative is as considerate. Take last year’s painfully provocative “Run Hide Fight,” for example, which was essentially “Die Hard during a school shooting,” turning such an event into an action thriller. While Phillip Noyce’s “The Desperate Hour” doesn’t go quite that far, it sadly proves woefully misguided in its attempts to merge solemnity with suspense, making for a film that doesn’t quite know who it’s for or what story it wants to tell.

“The Desperate Hour” begins with Amy Carr (Naomi Watts), a widow still struggling to cope with her husband’s death as the one-year anniversary nears and keep her family together despite the emotional turmoil they’ve endured. Daughter Emily (Sierra Maltby) is back to her boisterous self, but son Noah (Colton Gobbo) remains distant and distressed, often refraining from speaking with his mother or sister and staying home from school regularly. Today is one such “sick day,” so Amy leaves Noah at home, bristling in bed, and goes out for a morning jog, where she’s subsequently bombarded by phone calls from friends and family who have the latest gossip or requests for errands they need her to run. When two cop cars speed past her only ten minutes later, Amy starts to suspect that something terrible is taking place in Lakewood. Those concerns are confirmed after receiving a notification that an active shooter is at the Lakewood High School. Initially, Amy thanks her lucky stars that this was the day Noah chose to skip school; that is until she’s notified that not only did he actually end up attending class today, but his car is also being actively searched, as he’s suspected for involvement in the shooting taking place.

If “The Desperate Hour” followed through on that premise – a mother grappling with the fact that her grieving son may be a murderer – it would’ve been far more thrilling thematically. The build-up to this reveal is riveting, as the script slowly doles out morsels of information throughout a harrowing half-hour, building up to the reveal that Noah may be the perpetrator. Screenwriter Chris Sparling does a great job pacing these reveals, escalating the intensity effortlessly, and taking things at just the right speed. By the time the 80-minute feature reaches its second half, it sadly stumbles, trading the established realism of the story for over-the-top – and often implausible – theatrics. Watts’ performance descends into delirium, the twists and turns become offensively overwrought, and Noyce starts to treat the tale as a suspense thriller, which is evident in his increasingly erratic – and less effective – direction. “The Desperate Hour” loses control of its characters, so intent on overwhelming us with melodrama and mania instead of letting things unfold more logically.

Even worse, the film tries to end with a character quite literally speaking to the camera about how “bad” school shootings are and that “something needs to be done,” acting as if this last-minute monologue delivered with minimal effort excuses the filmmakers from turning a true-life tragedy into an emotionally exploitative genre flick. It’s too bad then that Watts is genuinely turning in some wonderful work here, fully invested in Amy’s anguish and portraying her physical exhaustion to perfection, as what should be a stunning one-woman showcase is undercut by the limitations placed on this role in the second half, where Watts is merely asked to wail on countless phone calls, losing the subtlety that served her so well at the start. If “The Desperate Hour” is worth watching at all, it’s undeniably for Watts, but even she can’t excel as much as expected with such a subpar script.

If the entirety of “The Desperate Hour” were like its second half, it’d be much easier to write off, but the fact that its first 30-40 minutes are so gripping makes this a far more frustrating affair. The quality of filmmaking may be acceptable across the board. Still, it’s too tough to get past the questionable handling of this tragic subject matter to recommend the drama with any sense of enthusiasm, no matter how committed Naomi Watts is to the unfolding chaos. And any hope for deriving deeper meaning from the movie gets lost in all the chaos.