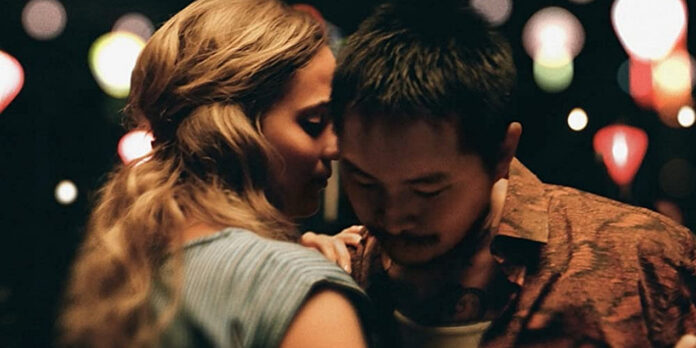 THE STORY – Antonio LeBlanc is a Korean adoptee raised in a small town in the Louisiana bayou. He’s married to the love of his life, Kathy, and raising his beloved stepdaughter, Jessie. Struggling to make a better life for his family, he must soon confront the ghosts of his past after learning that he could be deported from the only country he’s ever called home.

​​​There’s a loophole in the U.S. adoption system affecting tens of thousands of people, and in some instances, they don’t even know it. Even if these people have spent decades in this country, deportation is a reality they face, thanks to faulty paperwork. “Blue Bayou” tells the fictional story of just one of those people and his fight to stay in the United States and be with his family.

New Orleans tattoo artist Antonio LeBlanc (Justin Chon) may look tough on the outside as he’s covered almost head to toe in tattoos. Still, in reality, he’s a devoted and loving family man looking to do the best for his pregnant wife Kathy (Alicia Vikander) and adorable step-daughter Jessie (Sydney Kowalske). His relationship with Jessie is enough to make anyone fall in love with him, but his criminal record doesn’t particularly make him a catch with employers. The film opens on this reality, immediately showing that the employer will not consider him for the job. The interviewer also asks that familiar question that people who look “different” — i.e., not white — hear all the time: Where are you from? When Antonio says he grew up in Louisiana, and the interviewer, who we never see, is clearly not satisfied with the answer, Antonio says he was born in Korea but was adopted by Americans.

Though Antonio’s life may seem decent on the outside, there’s tension with Kathy’s ex Ace (Mark O’Brien), a Louisiana cop. He increasingly wants to play a more prominent role in Jessie’s life, but Kathy wants him to keep his distance after abandoning them years earlier. When a family fight in the middle of a grocery aisle with Ace and his racist partner Denny (Emory Cohen) takes place, it ends up changing the trajectory of Antonio’s life. He’s arrested and later transferred into the custody of U.S. Immigration and Customs Enforcement. Though he’s been in America for almost his entire life and is married to a U.S. citizen, his adopted parents never formalized his citizenship. After he meets with a lawyer, he’s given two options: He can leave the country voluntarily, or he can fight. However, if he loses, he can never come back.

At its core, “Blue Bayou” takes on a subject that is rarely seen in films. The film ends with the statistic that 25,000 to 49,000 children adopted by U.S. citizens between 1945 and 1998 may lack citizenship. And when the film focuses on that aspect, we see its most emotional moments. Antonio and Kathy, so in love and with a baby on the way, have no idea what to do to make him stay. That helplessness that Chon and Vikander portray hits viewers, knowing that they also don’t know how to help them in that moment. Jessie and Antonio’s relationship also begins to change as she realizes another father figure will likely leave her, and it’s heartbreaking to see this play out in real-time. No matter what Antonio says to make her feel better, she knows deep down what’s coming. Kowalske is a standout, although some of her lines are definitely things children would never say. When Jessie shares that she’s worried she’ll be second-best once the new baby arrives, she says, “It’s OK, she’s your kid. You’re supposed to love her more.”

The movie starts to get shaky when several other plots are introduced. For a brief moment, audiences see Antonio return to a life of crime in order to get enough money for his lawyer, which ends up driving a wedge between him and Kathy. There’s also a lot of tension between Antonio and his mother-in-law, but it’s never addressed or explained in any way, aside from assuming that she doesn’t like him because of his criminal past. Audiences learn revelations about his upbringing: Him bouncing from foster homes, being abused, and also his biological mother’s decision to give him up for adoption, which is shown through various flashbacks. Antonio also meets Parker (Linh-Dan Pham), a Vietnamese American woman with terminal cancer who helps connect him to his Asian identity. Not to mention, racist cop Denny — who Cohen portrays like an over-the-top cartoon character — is up to no good with his band of redneck friends. There is way too much going on in the film, and it becomes too busy and underdeveloped in the end.

Out of all of these, Chon should have focused more on the relationship with Parker — she is a welcome presence away from all the drama — and Antonio’s past. At one point, his lawyer suggests he have his adoptive mother vouch for him at his trial, but Antonio is entirely against the idea. It isn’t until later that we learn he endured abuse at the hands of his adoptive father. This, as well as his foster home past, could have been explored so much more, especially since the entire movie is about his adoption. It would have helped paint a much better picture of this man rather than focusing on his criminal past.

Though the story is rocky, the cinematography is a standout at specific points in the film. When we see flashbacks of Antonio’s mother, cinematographers Ante Cheng and Matthew Chuang make the hues of the water fill the screen and look so dreamy. Even showing off the New Orleans city lights and surrounding areas makes one feel like they’re in the city themselves.

When “Blue Bayou” focuses on its main storyline, there is a lot to be praised, thanks to solid performances from Chon and Vikander. But there are too many side plots that muddy the story and underdeveloped plots that, if Chon had spent more time on, would have made the film even stronger. Even though it didn’t hit all the marks, it’s great to see a film explore this topic and make people more aware of the injustices affecting thousands of people in this country.