“THE BEST IS YET TO COME” 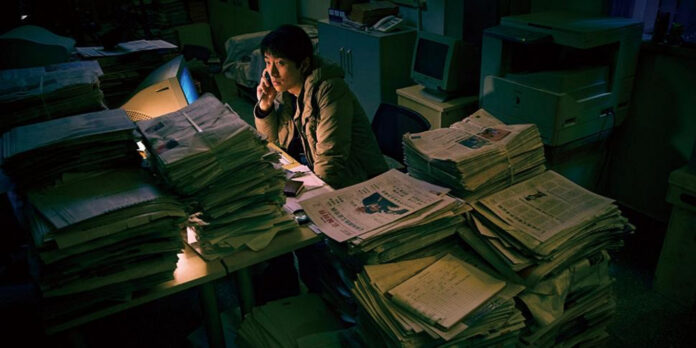 THE STORY – Driven, stubborn, and a gifted writer, Han Dong (White K) is one of many talented youths who have given up the security of a steady job in their hometown to pursue a dream in the big city. When a fire devastates the crowded, rundown apartment he was living in, he’s interrogated by the police because he has no residence permit. While being questioned, Han Dong receives a call that will change his life. One of the top reporters (Zhang Songwen) at Jingcheng Daily has finally read one of Han Dong’s essays and, impressed with his sharp style and acute vision, offers him an internship at the newspaper. Han Dong is ready to seize the opportunity, one that will set him on a path to success. Then, one day, the young journalist uncovers the trafficking of forged health certificates for Hepatitis B carriers — often asymptomatic patients — who are unjustly discriminated against as a result of the lingering belief that the virus can be easily transmitted in public spaces.

“The Best Is Yet to Come” premiered at the Venice Film Festival on September 9th. The film is the directorial debut of Wang Jing and chronicles the difficulties facing Han Dong (based on real-life reporter Han Fudong) as he attempts to find a job in Beijing. Han Dong’s life goal is to be a reporter. He knows he’s up for the challenge, but it’s as if the world won’t give him a chance. Massive industrial complexes beckon him towards his dreams of working in a newsroom, but he cannot find a way to get his foot in the door. His peers don’t fare much better either as his best friend Zhang Bo can’t pass the exam to get into graduate school and although his girlfriend can say she has a job, an awful boss and even worse working conditions make the situation less than ideal.

Finally, an opportunity strikes at the paper Jingchen Daily and Han Dong gets a chance to be an intern. It’s here that Han Dong begins to do some real reporting and is exposed to some of the ugly truths in the world. His boss assures him that reporters must be objective and state the facts; emotions can’t cloud their judgment. While working on a massive story on the illegal blood trade and Hepatitis B positive patients, Han Dong sees that just reporting the facts is more complicated than one realizes. His objectivity will be tested as he is put right in the middle of a deeply emotional situation.

“Everything that happens in this world is somehow connected to us” reads the opening title of “The Best Is Yet to Come.” It’s a very fitting line that encapsulates the entire theme of the film. The screenwriters do a great job of weaving the theme through the story as each character’s actions impact the others in a domino effect. Han Dong (played convincingly by White K) realizes that his reporting is not just words on a page but also something that can have a massive impact on those that he’s closest to for the rest of their lives. Perhaps the most significant example of this is how a report about how the forgery of medical records goes on to affect his best friend, Zhang Bo (Song Yang). It’s a heartbreaking realization that could potentially wreck a friendship and Zhang Bo’s life. This realization’s fallout is played out in a fascinating way that makes the audience wonder how we would act if posed with such a dilemma.

While there is a lot to admire about “The Best Is Yet to Come,” some of the pacing is off. The film gets off to a pretty decent start as Han Dong embarks on a job search but loses steam shortly after he starts his internship, learns the inner workings of the paper and tries to get an apartment with his girlfriend, Xiao Zhu (Miao Miao). It certainly doesn’t help matters that his girlfriend has no characterization whatsoever. We only know her as Xiao, a supportive girlfriend who has a terrible job. There are plenty of opportunities in the one-hour and fifty-minute runtime to give her some character background, but she is just a plot device who sits in the background when the story needs her. ​

“The Best Is Yet to Come” takes a deep dive into investigative journalism proving there is profound power in words. I do wish the film moved at a steadier pace considering some sequences make the film feel longer than its runtime. However, this is ultimately a story that presents its audience with a compelling moral dilemma. When one is confronted with horrific circumstances, is it possible to be objective?