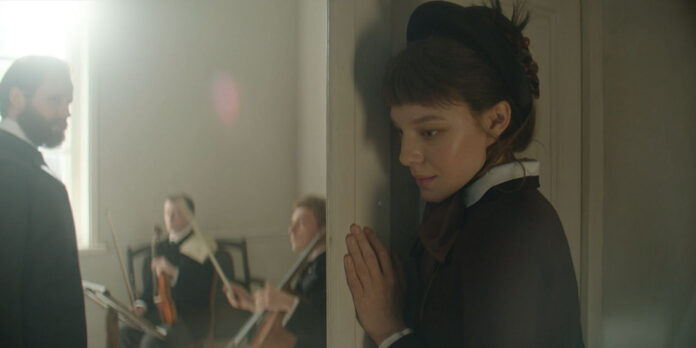 THE STORY – Tumultuous relationship between Pyotr Tchaikovsky, the most famous Russian composer of all time, and his wife Antonina Miliukova.

​​​​Before going in-depth with the review for “Tchaïkovsky’s Wife,” it is necessary first to note why a Russian director was allowed to compete In Competition at this year’s Cannes Film Festival. The director, Kirill Serebrennikov, was placed under house arrest by the Investigative Committee of Russia back in 2017, and it was not until January 2022 that he escaped the country and made his way to Hamburg. The film may be focusing on a famous Russian couple, but this storyline lets Serebrennikov play with storylines that would go against the beliefs of the Russian government. Therefore, it is essential that his film made it onto this year’s list, and critics should be talking about it despite what the country is currently doing in its unjust invasion of Ukraine.

Pyotr Ilyich Tchaïkovsky is one of the biggest names in music, particularly when it comes to work such as Swan Lake (1877) and The Nutcracker (1892). However, his personal life is not talked about much in general media, and it turns out that it is quite a fascinating story. Serebrennikov is not fascinated by representing Tchaïkovsky’s music but instead shows the downfall of his love life through the perspective of his wife, former student Antonina Miliukova (Alyona Mikhailova). The film does not take long to show how infatuated she is with Tchaïkovsky, highlighting how badly she wants him to be hers.

Despite being called “Tchaïkovsky’s Wife,” this film does not want to focus on the pathway of the marriage taking place. The opening sequence of this film is set in 1983 when it is announced that Tchaïkovksy has died. A fantastical moment within the opening sequence makes it clear to the audience that he and his wife did not have a good connection, and from that, the film goes back to the beginning of their story to explore what went wrong in the relationship. It becomes clear throughout the marriage that nobody believes he is genuinely in love with his wife, and Serebrennikov spends a lot of time showing the downfall of their marriage and Antonina’s reluctance to get a divorce.

A film like this only works if the leading character is captivating, and Alyona Mikhailova gives a sensational performance as Antonina. An early contender for the Best Actress prize at Cannes, her emotion helps drive the story and reinforces the love that Antonina has for Tchaïkovsky. The other performances in the film are also admirable, with Odin Lund Biron, in particular, having a strong physical appearance as Tchaïkovsky. During the time jumps between the narrative, the make-up work done to sell the aging of the characters is well executed and helps sink the audience into this world.

As a period piece, “Tchaïkovsky’s Wife” is beautifully crafted. It is hard not to fall in love with the costume design, not just with the dresses and corsets, but even the veils and jewelry highlighted, bringing the fashion in as part of the narrative and identity of the characters. The score is loud yet impactful, blending the classic orchestral tones with a more intense atmosphere, highlighting Antonina’s struggles within the narrative. The cinematography is also striking, following the same beats other Serebrennikov films have with many long takes and a muted color palette. All of these technical elements come together to elevate Mikhailova’s performance and suck the audience back into the 1870s successfully.

The story itself is one that is compelling, telling the personal life of Tchaïkovsky and the decline of his connection with his wife. Early in the marriage, there are hints that people do not believe in the marriage, primarily because they could not believe that Tchaïkovsky was capable of being in love. This story explores sexuality in a way that does not make it the focal point but still acknowledges that it is an integral part of the narrative. It is also a narrative point still relevant in today’s political landscape in Russia. While it does not focus on a specific message, it is nice to see Serebrennikov placing a focus on this subject matter within his film.

The main issue that “Tchaïkovsky’s Wife” faces has to do with the runtime. Clocking in at 143 minutes, numerous scenes felt unnecessary and did nothing but drag the pacing out. It is quickly made clear to the audience that Antonina is entirely in love with her husband, and that is pointed out again and again when she marries him, when she is confronted by his friends on their relationship status, and when the divorce is first brought into play. It becomes repetitive as nothing is added to the narrative emotionally, and it also has an impact on the perception of Antonina as a person since she would stop at nothing to keep someone who couldn’t love her back. A gorgeous sequence at the end of the film saves the viewer’s perspective of her, but the rest of the film, unfortunately, does take a bit of a tumble narratively in the final act.

To tell the story of the personal life of an icon such as Tchaïkovsky through the lens of his wife presented a fresh narrative to this story. If you are a fan of period pieces, there will be so much to appreciate technically, regardless of the repetitive narrative and structure. Even with the weak and redundant writing of Antonina, Mikhailova’s performance immediately makes her a fascinating character who connects with the audience. Overall, it is definitely worth giving “Tchaïkovsky’s Wife” a watch despite its many flaws.

​"TCHAIKOVSKY'S WIFE"<b>THE GOOD -</b> Alyona Mikhailova's heartbreaking performance as Antonina Miliukova helps guide the film. The costume design and score stand out on a technical level.<br><br> <b>THE BAD -</b> The film runs over 140 minutes, and most of that runtime is spent focusing on the same message that quickly becomes repetitive. The timeline can also be hard to follow due to the creative freedom taken within the story.<br><br> <b>THE OSCAR PROSPECTS -</b> Best Costume Design<br><br> <b>​THE FINAL SCORE -</b> 6/10