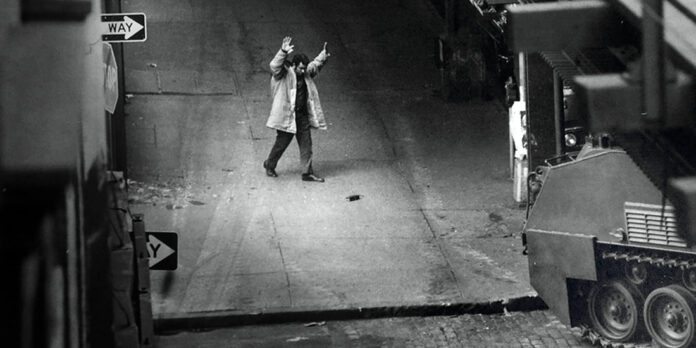 THE STORY – In 1973, the NYPD corners four young African Americans who planned to steal guns for the purpose of self-defense. Visionary police psychologist Harvey Schlossberg convinces his superiors to allow him to negotiate and save the 12 hostages.

​​​Violent confrontations between ordinary citizens and police forces have been the center of fascination for the longest time. While it may seem that the current spotlight thrust upon these interactions has given them a greater sense of omnipresence, the true history is these cases have occurred frequently in the past with the same amount of scrutiny and controversy. It can be an intriguing exercise to look backward in time and see how such incidents were received and how lessons can be learned from a more modern perspective. “Hold Your Fire” sets out to dive into such discussions, and it uncovers a gripping story that is often inconsistent in crafting an engaging execution.

The focus of this story is inside a New York City sporting goods shop in 1972. What starts as a relatively peaceful day quickly descends into violence when a group of young Black men enters the establishment with the intention to rob the store of its ammunition. What quickly follows is an aggressive police response that holds much tension due to several of the store’s patrons being held as hostages. Shootouts, casualties, and a tedious negotiation process followed suit in a standoff that lasted many long hours. Fifty years later, a handful of participants who were involved that day retell their stories in an effort to illuminate their own viewpoints of what caused and can be learned from that fateful day.

Director Stefan Forbes sets out to create a portrait that casts its gaze on both the past and present, and there are a number of tools he utilizes to accomplish this task. The archival footage especially is artfully deployed to give a rich texture to the setting and accentuates the immersion of the time period. The interviews with the individuals also present a fascinating dichotomy of opposing viewpoints. When it comes to the group’s surviving members that initiated the robbery, there’s greater context to highlight the danger they felt as ostracized members of society. Their panic to acquire protection thrust them into a dangerous series of escalation. This is juxtaposed against those working on the other side of the law, many of whom share a frank commentary often rooted in racial discrimination with occasional self-reflection. Forbes shows an eye for a compelling dissection to be unearthed.

At the same time, the execution of the storytelling is where the film finds significant faults. While one can appreciate the film’s brevity, the short runtime impedes settling into the details at hand. The pacing speeds right through the major developments in the narrative to the point where there’s a sense of disorientation. The occasion to settle into the political observations or even the simple sequence of events is only given the surface exploration. It’s particularly felt with the negotiation process, which is built up to be a radical intervention to diffuse the tensions often exacerbated by the police but here is given little depth. What results is an objective that leans more to tell and not show. While this certainly would be the goal for most documentaries, it is less effective here due to the construction. One gets plenty of remarks on what occurred without any sense to paint a more visceral picture. Despite the rich material, an emotional distance is pervasive throughout the piece.

“Hold Your Fire” sets its gaze toward a critical historical moment to examine the specifics of what occurred and provide a reflexive analysis to be viewed in a modern context. What may appear to be a simple robbery gone bad actually showcases a deeper issue of unresolved violence that strikes from within and outside of a community. Unfortunately, it’s a captivating thesis that struggles to remain totally compelling as presented. Despite the riveting information, the momentum is not sustained enough to keep one entirely invested. The gravity of this subject matter is felt, but a persistent hollowness endures. Still, there is a gripping journey here that continually pushes one to explore further into the rippling effects. It is regrettable that the film never stays put for long enough for this study to live up to its powerful potential.