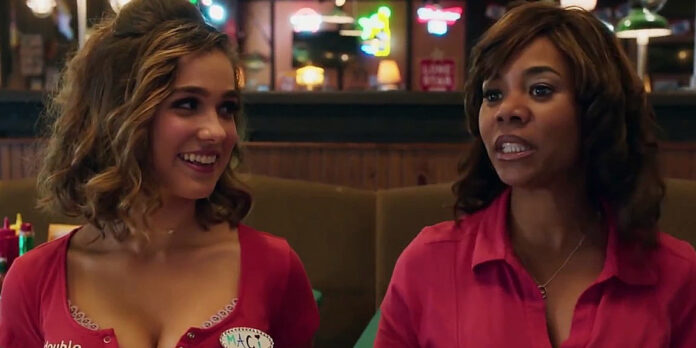 THE STORY – Lisa is the general manager of Double Whammies, a sports bar that features skimpily dressed waitresses. Always nurturing and protective of her staff, she soon faces one trying day that tests her optimism at every turn.

Lisa Conroy (Regina Hall) is the general manager of Double Whammies, a Hooters-like sports bar restaurant. She is smart, confident and always having to deal with a multitude of issues both at work professionally and personally with the people she cares about the most. At Double Whammies, the two are always colliding as she gathers the strength to make tough minute to minute decisions which have an impact on the lives around her and unbeknownst to her friends and family, on herself as well.

Taking place over the course of one day and showing all of the meant to moment details within that day, “Support The Girls” is a slice of life movie that never judges its characters just because they work for a working class sports bar/restaurant. The girls who work there are unquestionably pretty but are never inappropriately exposed for the mostly male dominant clientele in a disrespectful or harmful way. Instead, Double Whammies is meant to be a fun atmosphere and this is all conveyed through its characters and their performances.

Lisa tries her very best to strike a balance between her professional and personal life with the right level of kindness which gains the admiration and respect of those around her. It’s a tremendous performance by Regina Hall, who carries the emotional weight of the movie and its themes of sisterhood, friendship, and support on her back. Hall is not alone though as she is supported by a diverse and extremely likable cast with Haley Lu Richardson (continuing to show us her range with this and last year’s “Columbus“) and Shayna McHayle (also known by her stage name Junglepussy) as the two biggest standouts.

When we come to the third act, “Support The Girls” grows into a story about celebrating one’s spirit and individuality in the face of change as the girl’s privately owned Double Whammies starts to get overshadowed by the big corporate restaurant chain. Their definable characteristics which make them lovable and infectious to each other (and by extension, the audience), are being threatened. However, “Support The Girls” stays true to itself, as do its characters to each other. And in the final act, writer/director Andrew Bujalski gives his characters one last act of defiant and expressive support that will have you shouting at the top of your lungs from rooftops for people to get out and see this movie.

“Support The Girls” may not have a high concept story that is wholly distinctive or be the most visually inventive movie of 2018 but it is one of the warmest and most humane watches of the year. These are working class people who don’t have all the money or luck in the world. However, they are doing the best that they can to make the most of life through hard work, accountability, support, and love. It’s the kind of benevolent storytelling we need right now and as stated before, it could really use your support to show that there is still some compassion left in this world.