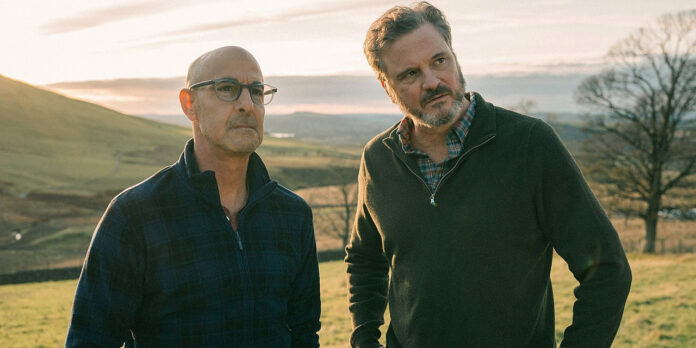 THE STORY – Sam and Tusker are traveling across England in their old RV to visit friends, family and places from their past. Since Tusker was diagnosed with dementia two years ago, their time together is the most important thing they have.
​
THE CAST – Colin Firth & Stanley Tucci

Following on from his independent debut in 2014 (“Hinterland”), Harry Macqueen has the duo of Colin Firth and Stanley Tucci this time to work with in his latest drama “Supernova.” Following similar themes of love and change and the same background of the British countryside, Macqueen’s latest is an elevated heartbreak of a film that should be in the conversation come awards season.

The story follows the characters of Sam (Colin Firth) and Tusker (Stanley Tucci), a gay couple in their 50s who are traveling across England to visit family and friends as well as revisit memories from their past. In an old RV with their dog as a faithful companion, their time is being savored before these memories disappear. Two years ago, Tusker was diagnosed with dementia and “Supernova” plays these final peaks of their long-term relationship before it becomes unrecognizable. Like a supernova, this trip is taking place at the end of Tusker’s life before an explosion tears it all apart.

The film still focuses on the relationship between this couple and how unique their dynamic is. Tusker is confident and outgoing, stopping waitresses who were looking at Sam, a famous pianist, and telling them they can take a picture with him (although not mentioned in the scene, it seems fairly obvious she is unaware who he is). Whilst Sam is a lot more reserved, allowing Tusker to speak with family gatherings and running around with children. Although you can see the compatibility in their differences, you can also see how they differ in handling the situation they’ll soon face. Tusker, a novelist, is writing a final book but seems to always find reasons not to as he’s dismissive of Sam’s insistence. They have a tape player to record conversations with each other as well, remembering the back-and-forth exchanges they had.

Macqueen has delivered on an introspective road movie that takes a precise look at someone who is in their fifties. A long history is filled with memories, experiences, and scars which all form mannerisms, expressions, or certain in-jokes with those that have been there along the way. The term ‘over the hill’ is now applicable and this side of the hill is filled with long-term illnesses, fragility, and death. It’s something that everyone faces and knows that they’ll reach the bottom soon, but unfortunately some stumble and hit it earlier than others. Tusker seems okay with the fact that his shoelaces are untied whilst Sam keeps trying to double-knot them, unhappy with the idea of wasting a second or just letting death happen. Behind closed doors they are polar opposites as Firth’s anger matches Tucci’s quietness. These are two memorable performances which should hopefully be in contention for Oscar nominations.

Despite the bad times and tragedy that we know is waiting for them, “Supernova” is also filled with little snippets of the life they led and how it was well spent. Visiting their friends, every room is filled with people eating cake and children running through corridors aimlessly. They’ve touched so many people’s lives, including family, that acts as a final pit stop before they face the ending together. It’s a strong piece of work that doesn’t need to shout in your face to convey its emotion. A dinner table scene involving Sam and Tusker could have been easily raised to 11 but it stays at a hushed tone, showing us where they both are in acceptance of Tusker’s diagnosis. It’s the scene that most people will be looking towards when casting their nomination ballots as well as an emotionally affecting ending that will leave most teary-eyed.

In conclusion “Supernova” is a further acknowledgment of the acting prowess that both Firth and Tucci have had their whole careers and will continue to do so. It’s a lovely end-of-the-road movie that has plenty of stops to smile and reminisce on warm memories along the way.