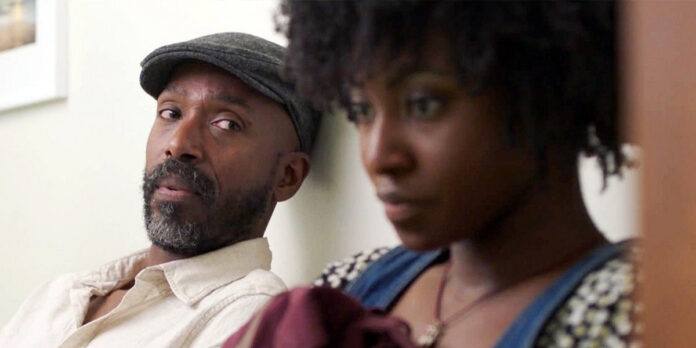 THE STORY – Atsushi Sakahara, a victim of the 1995 sarin gas attack in Tokyo’s subway system, travels with Hiroshi Araki, a member of the cult known as Aleph (formerly Aum Shinrikyo), the attack’s perpetrators. Together they visit their respective hometowns and the university they both attended.

​We open with a wide shot of a terminal at an airport and at first, we’re not sure what we should be looking for. The camera is a silent observer, just taking at the world. Then we witness what seems to be a heartfelt and warm reunion between a man, his wife and their daughter. It’s a scene that doesn’t look out of place in its setting. To the average passerby, it’s a scene that we wouldn’t think twice about. However, we aren’t simply passing by these three characters. Instead, we are going to spend incredibly close and intimate time with them for 101 minutes as we learn about their secrets, their anxieties, their concerns and hopes for the future.

We discover that this family is made up of Walter (Ntare Guma Mbaho Mwine), his wife Esther (Zainab Jah) and their daughter Sylvia (Jayme Lawson). It’s been 17 years since Walter was forced to leave his family in Angola, moving to America in the search of a better life but finally, they’ve been reunited. He brings them home to his one-bedroom Brooklyn apartment where a homemade banner greets them with the words “Welcome to America.” It quickly becomes clear that Walter hasn’t exactly achieved a life like the one depicted in the American Dream. He works as a taxi driver, living from paycheck to paycheck. It also becomes evident that the apartment is far too small for a family of three, with Sylvia having to sleep in the living room cordoned off with just a curtain.

In an attempt to maintain some sort of normalcy, Walter cooks a welcome dinner. However, this instantly strikes Esther as suspicious. Just who taught him how to cook? Walter isn’t the only one who seems to have changed. Esther seems more devoted than ever and insists that the family say grace before dinner, stating “We have so much to pray for.” She tries to get Walter to open up to her, “Lying is a sin” she reminds him, but he assures her that she has nothing to worry about. Of course, this is a lie. Walter has an ex-lover called Linda (Nana Mensah), who moved out of his apartment to make way for the family, leaving behind a white dress which Walter hides in an airing cupboard, unable to part from it.

While we start from Walter’s perspective, midway through, the film switches to Sylvia’s point-of-view and we witness events through her eyes from the very start of their airport reunion. Sylvia starts a new school, where she encounters microaggression from the very start, “Do you speak English?” a snooty, uptight white woman asks her. Things improve when she becomes friends with DJ (Marcus Scribner) and he encourages her to enter a dance competition. However, the situation at home doesn’t improve, in fact, it seems to be deteriorating quite quickly. In the film’s third and final act, we switch our focus to Esther’s perspective and her side of the story. We see how isolated and vulnerable she has become in this new land and how desperately she is trying to cling onto a marriage that is crumbling away. Despite all three of them being under one roof for the first time in 17 years, they appear more distant than ever before.

“Farwell Amor” is a story of discovery; whether that be the process of discovering oneself or discovering someone else’s hidden secrets. It’s also a powerful fable about the importance of communication and the need to be honest with those you love and care for. It also examines what makes a place a ‘home.’ Is your home where you’re from or is it where you currently abide? Is a place classed as your ‘home’ if your family is also there? “Farewell Amor” also examines the act of reconnecting, whereas other more traditional Hollywood films would stop after the reunification of the family at the airport. Here we see that the story doesn’t end there. In reality, there are no happy Hollywood endings.

In terms of cinematography, the film is beautifully captured by Bruce Francis Cole, who uses blue and red lighting in such a profound manner in order to convey the emotions of love, passion and sadness that the characters experience as well as using intense close-ups to ensure that we see every facial expression demonstrated by the actors. Some may feel that these camera shots are too claustrophobic, but they are completely necessary for a film all about masking inner emotions.

The real strength of the film lies in its performances. In less than capable hands, the character of Walter would have been presented as a selfish insensitive charter, but Ntare Guma Mbaho Mwine manages to portray so much complexity and emotional range. Jayme Lawson shines as Sylvia, who is simply trying to adjust to the customs and culture of America. However, it is Zainab Jah who is truly astonishing by capturing Esther’s vulnerability and strength at the same time.

Tanzanian-American writer/director Ekwa Msangi was inspired by her own Uncle’s struggle to reunite his family, who spent 24 years apart from each other, for the film. It’s this personal connection that elevates the slightly formulaic narrative (although the film does suffer from an ending that borders on cliché). Certain revelations don’t amount to much of an explosive confrontation and side plots seem to end with no real conclusion, which hinders the overall impact of the film.

Msangi also brings a sense of innovation to the immigrant experience film. With “Farewell Amor” she shows us a realistic depiction of the American Dream and how difficult it is to achieve that dream in the modern age. Life isn’t how it’s depicted in the movies. It’s raw and painful, but the support of a strong, loving family can get you through some difficult times.