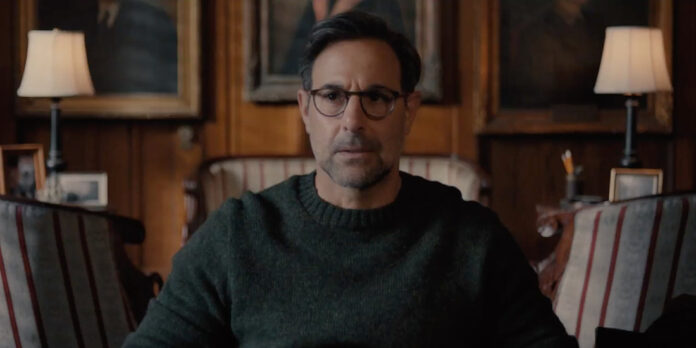 THE STORY – A well-respected professor who is a celebrated novelist and loving husband loses himself when he becomes obsessed with an ambitious and talented student.

​​2017 was the year of #MeToo. A revolution, not just in Hollywood, saw victims of sexual assault and harassment emboldened to speak out and demand change and action. It’s a complicated, nuanced issue, layered with complexities and questions. Perhaps it’s an issue of bad timing for “Submission,” a film that directly addresses the topic of sexual harassment but was made prior to this revolution. It’s still a respectable film on its own but rarely digs deep enough into this complex issue to have anything surprising to say.

Stanley Tucci gives a wonderfully subtle performance as Ted Swenson, a Professor of literature and one-hit-wonder novelist. He’s still working on his next book but finds himself stuck with little inspiration. Of course, he has an editor breathing down his neck waiting for pages from the new book. Meanwhile, Ted gets little pleasure from his classes, as the students are writing derivative and downright weird works. We know much of what Ted is experiencing from an overly descriptive narration. It’s relied on far too heavily to set the stage for the film and then disappears later in the film (and never returns). The film could have worked without it, as Tucci is more than capable of showing us his thoughts and concerns rather than spill it all in voiceover.

One student in his class catches his attention, Angela Argo (Addison Timlin). We already know where the film is going as soon as Ted notices Angela. She gives him the first chapter of a novel she’s writing. It’s clear they’ll develop a relationship that crosses lines, and it seems obvious she’s not as nervous and innocence as she appears. Still, even while it’s not very surprising, the film keeps things interesting enough to stay invested. Ted is genuinely attracted to Angela’s superb writing. Angela is clearly manipulative, talking him down every time he seems hesitant. Again, it’s unsurprising, but still engaging. Their interactions are genuinely interesting.

Early on, many of the professors at the college get together for a dinner party. The conversation turns to sexual harassment on college campuses. The professors discuss ways in which they protect themselves from accusations, or even from the appearance of impropriety. One mentions never meeting with a female student with the door closed. Another mentions that he keeps a tape recorder in his desk. They also talk about the students being overly sensitive to material from the past that might be deemed “offensive” nowadays. This entire conversation is needed and highly interesting. I kept wishing that the film would explore these deeper themes more than it ever did.

For a film about an inappropriate teacher-student relationship, the film has an almost light tone to it. That’s not a complaint, just a surprise. It felt as though Ted knows what a cliché trap he’s falling into. He’s becoming the story you always hear about. This light take on what could have (or perhaps should have) been does make the story feel different than expected. Though we assume we know the outcome, it’s still entertaining enough to fend off boredom. We can largely thank Tucci and Timlin’s charming performances for that.

Rather than digging into the ideas that were started at the dinner party, Submission keeps the story straightforward. We’ve seen this story before: the professor and student begin an inappropriate relationship and things fall apart. The movie is never as subversive or challenging as the film could have been. Maybe it’s the fault of bad timing. Maybe if this had released prior to the Weinstein scandal and the rise of the #MeToo movement, a simple story would have had a greater impact. There’s really nothing bad here. It keeps the audience engaged with a slight but well-told story, it just might leave you wanting a little bit more.