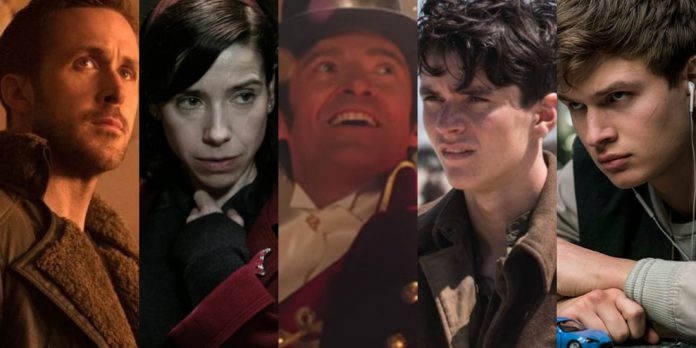 Just as I did yesterday with the acting, screenplay and other best film categories, I am now going to dive deep into my predictions for the four audio categories at the Oscars – Best Original Score,Best Original Song, Best Sound Editing and Best Sound Mixing.

​Click below to see analysis and predictions for these four categories.

Here are the nominees for Best Original Score…

Best Original Score is pretty much all set to go to Alexandre Desplat, thus rewarding him with his second Oscar (He first won here in 2014 for his work on “The Grand Budapest Hotel”). He has won the Critics Choice, the Golden Globe and the BAFTA for Original Score. It also has won the most precurrsors of any film in this category with 13 while “Phantom Thread” follows behind at 9. However, is there a world where Johnny Greenwood’s score for “Phantom Thread” could potentially upset Alexandre Desplat? Let’s take a look… 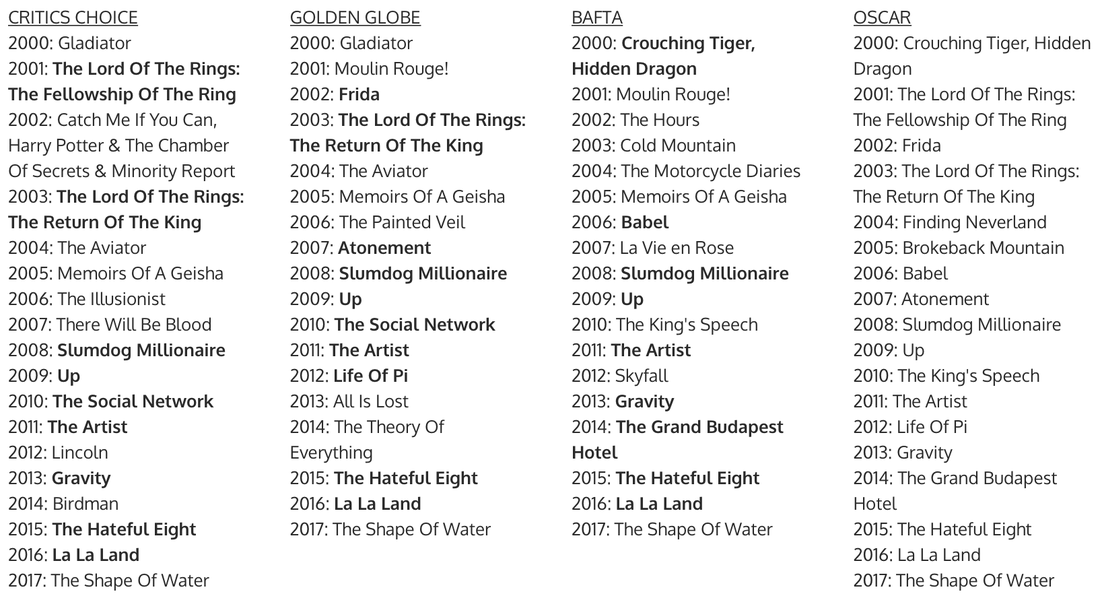 2004 and 2005 are the two years worth looking at for the purposes of predicting whether or not “Phantom Thread” will surprise here. In 2004 “Finding Neverland” won Best Original Score without having won the Critics Choice, Golden Globe or the BAFTA, something that “Phantom Thread” has also not done. 2005 though is the more interesting of the two for “Brokeback Mountain” won the Oscar despite not having won the Critics Choice, Golden Globe or BAFTA and instead all three went to “Memoirs Of A Geisha.” It reamains the only time that one film swept all three of the big awards yet failed to win the Oscar. “Slumdog Millionaire,” “Up,” “The Artist,” “The Hateful Eight” and “La La Land” won all three of the big awards and went on to win the Oscar. With the exception of “The Hateful Eight,” the other films were either Best Picture winners or Best Picture nominees, something that applies to both “The Shape Of Water” and “Phantom Thread.”

To be honest, it’s very clear to me that it is going to be “The Shape Of Water” which wins this. However, if the unthinkable happened, just know that the precedent has been set.

The nominees for Best Original Song are…

And here is how things have broken down with this category at the Critics Choice (Who started handing out this award in 1998), the Golden Globes and ultimately the Oscar… 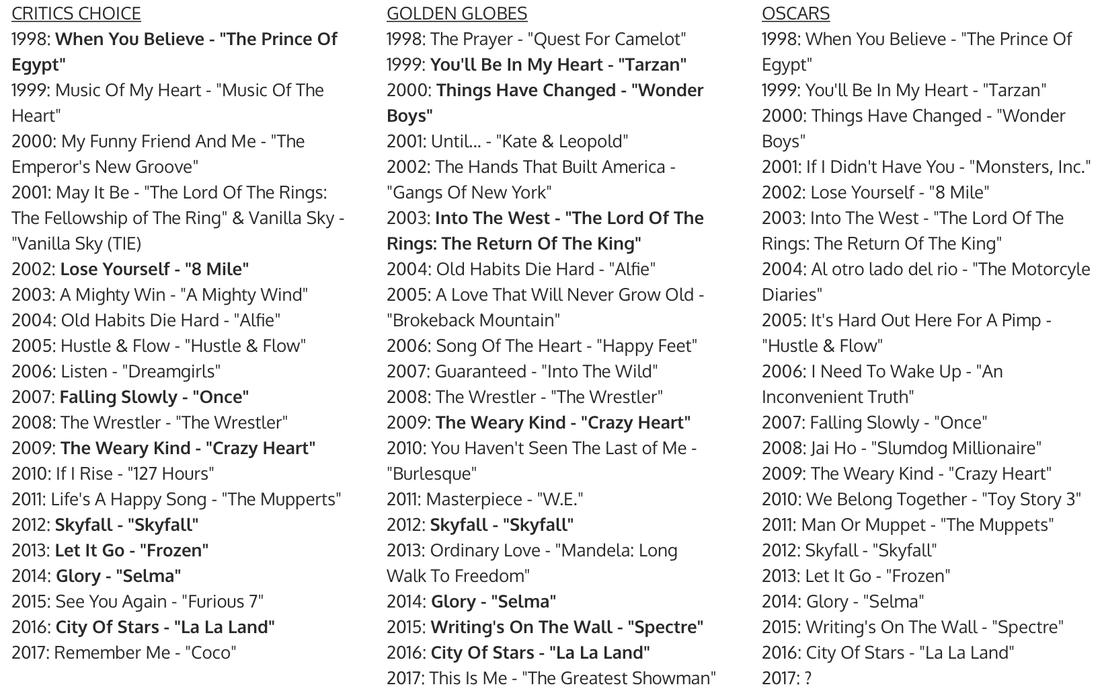 More often than not, when a song wins at both the Critics Choice and the Golden Globe (Using the sample above), it goes on to win the Oscar pretty easily. Examples of this include: The Wear Kind (“Crazy Heart”), Skyfall (“Skyfall”), Glory (“Selma”) and most recently, last year’s winner City Of Stars (“La La Land“). The only exception is the song The Wrestler from “The Wrestler” which was not nominated for the Oscar in 2008. We’re in a scenario where the Critics Choice and the Golden Globe have split.

​Evenly split, with a success rating of 50% each, the amount of times the Oscar winner did not win the award from the Critics Choice or the Golden Globes was 2001, 2004, 2005, 2006, 2008, 2010 and 2011 which roughly adds up to 37% of the time. It’s very likely that in a year with such passion for all five of these songs, that votes could split leading to an upset of the frontrunner right now which is This Is Me from “The Greatest Showman.” Why is it the frontrunner? With “The Greatest Showman” becoming a box office hit, the song being used officially for the Olympics right at the time that voting was occurring and the meteoric rise of the Oscar winning (Last year for “La La Land“) and Tony winnings (“Dear Evan Hansen”) team of Benj Pasek Justin Paul, there is no doubt that it is the frontrunner in this category. You would be wise to choose it to win this Sunday.

However, there is something to be said for Mighty River potentially winning as a way to honor both Mary J. Blige (Nominated but won’t win Best Supporting Actress) and “Mudbound.” Same goes for “Call Me By Your Name” where its passion from voters could help it to push through here to a victory. And then there is Remember Me from “Coco” which won the Critics Choice Award and was considered the frontrunner until This Is Me received the Olympics bump in publicity. Statistically speaking, it will most likely be either Remember Me or This Is Me but don’t act surprised if one of the other two squeak by in an upset. Sorry “Marshall” fans. You’ll just have to enjoy the nomination.

PREDICTED WINNER: This Is Me – “The Greatest Showman“
RUNNER-UP: Remember Me – “Coco”

And here are the stats for the Cinema Audio Society, BAFTA and how they both matched with the Oscar for Sound Mixing… 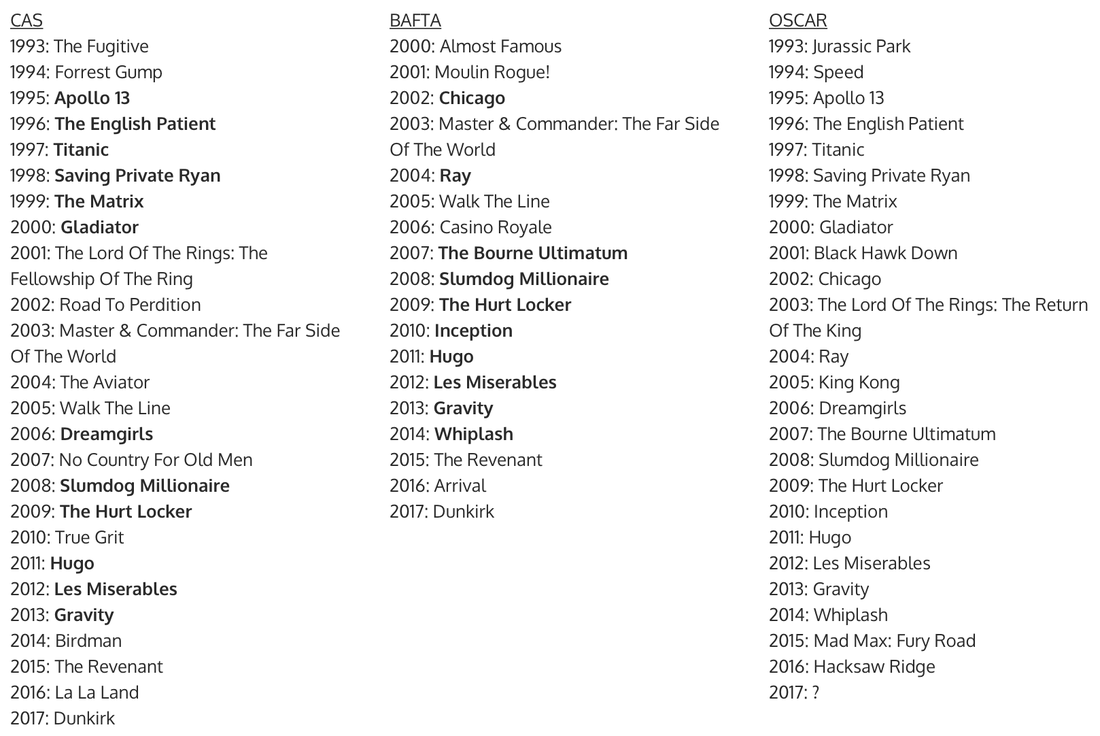 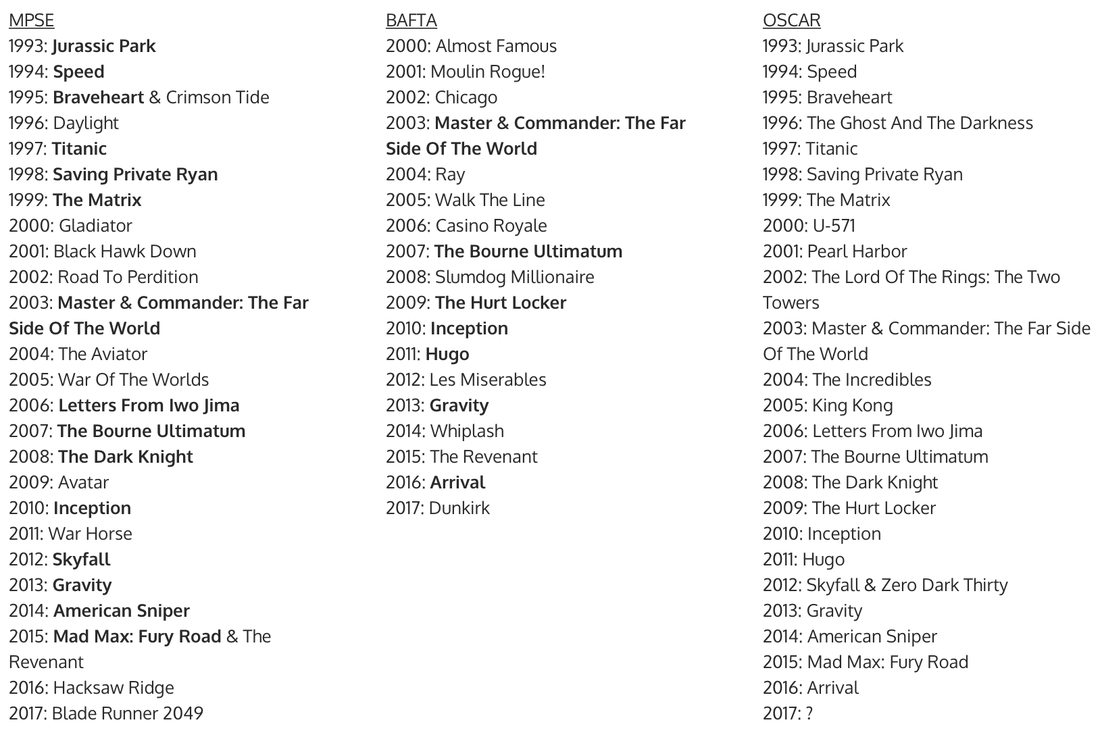 And finally, going all the way back to the beginning (1975) when the Sound Editing Oscar was created, here are all the times Sound Editing and Sound Mixing went to the same film.

That’s ​16/42 times that both awards went to the same film which adds up to about 38%. So what does all of this mean? Well, I am personally of the belief that because the films are exactly the same in both categories that the Sound awards WILL NOT split this year between two films. It is theoretically more likely that they both go to the same film this year. “Dunkirk” has won the BAFTA (Sound Editing match – 7/17 times or 41% and Sound Mixing match 10/17 times or 59%) and the CAS (Sound Mixing match 12/24 times or 50%). There have only been five times since the creation of the CAS that their award and the BAFTA went to a film which won both Sound Editing and Sound Mixing, 2008, 2009, 2011, 2012, 2013. That equates out to about a 29% success rate for “Dunkirk.”

​The MPSE and the BAFTA have gone to a film which won both awards at the Oscars only three times in 2007, 2010 and 2013. Also too, when looking at BAFTA, their winner have gone on to win either Sound Editing OR Sound Mixing 12/17 times or 71%. Make no mistake about it, “Dunkirk” is very likely going to win one of the Sound awards on Sunday without a doubt. It’s a Best Picture nominee, one of the most acclaimed films of the year with the second highest amount of nominations. It’s also a war film, which always do particularly well here in both categories.

While all of this is fascinating and would be a logistical nightmare if one were trying to determine how a split would go, the reason I am not doing that this year is simply because both categories are exactly the same. It’s likely that when there is a little overlap but with other films nominated for one award and not the other that you start to see votes getting pulled and split in different directions. Most people who vote because they’re either associated with the film or know a friend who worked on it, are going to cast their votes the same in both categories. Then of course there are those who still don’t know the difference between the two and they will vote nonsensically the same for both. I can honestly say that if it were me, I’d be voting “Dunkirk” for Sound Mixing and “Baby Driver” for Sound Editing and that is also if there was a split, how I would expect it to go. However, not many people think that way. It’s more likely that they see “Dunkirk” and say “Dunkirk…I liked that one. It had gun shots and explosions.” Check.

And that’s it for the audio categories. Stay tuned for my predictions on the visual categories which will be up later this week. What are your thoughts on these four categories? What do you think is going to win Best Original Score, Best Original Song, Best Sound Editing and Best Sound Mixing at the Oscars this year? Be sure to check out my previous articles on predicting the acting, screenplay, and other best film categories as we get closer to the Oscars this Sunday.