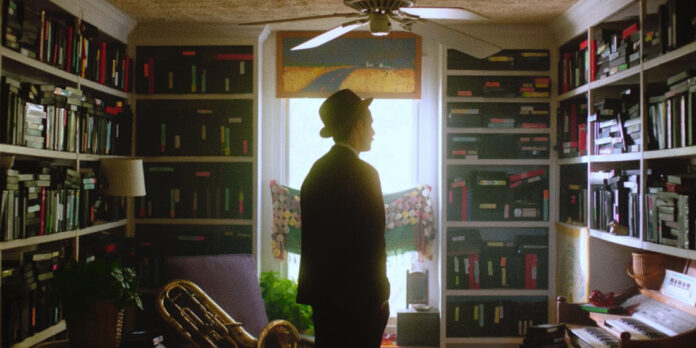 THE STORY – In a future where the government records dreams and taxes them, a dream auditor gets caught up in the dreams of an aging eccentric.​
​
THE CAST – Penny Fuller, Kentucker Audley, Grace Glowicki, Reed Birney, Linas Phillips & Constance Shulman

​​​Even though it’s a relatively new art form, it’s become more and more difficult for a film to create a bold new look that’s uniquely its own. “Strawberry Mansion,” the mind-melting new movie from Kentucker Audley and Albert Birney, does just that. It doesn’t wait long to establish a strong visual language. From the first frame, it’s a work of bold designs and a strong directorial voice. But whether it all adds up to anything substantive is a different story.

Set in the year 2035, “Strawberry Mansion” takes place in a pastel-colored dystopia where the government records and taxes dreams. A dream auditor named James Preble (Kentucker Audley) finds himself tasked with investigating an eccentric aging woman named Arabella (Penny Fuller). It quickly becomes clear, however, that this won’t be a normal audit, and Preble finds himself drawn into Arabella’s unconscious world. She knows a dark truth about the science of dream auditing and Preble works to uncover this mysterious revelation.

The look and feel of “Strawberry Mansion” is a triumph of vision. It’s clear that the pair of director-writers worked hard to conjure up such a specific world. Although it’s set in the future, the film has a distinctly retro style, with many of the characters using old-fashioned cars and wearing vintage clothes. These elements of the past aren’t tied to one specific period, with props, costumes, and design elements calling to mind trends from the 1940s all the way up to the 1980s. It effectively conjures up a dreamy, twilight world that isn’t specifically the past, present, or future. It may take place 14 years from now, but “Strawberry Mansion” inhabits a time that can only be called an alternate future. This hazy, non-specific feeling is helped by the cinematography, which evokes the look of a vintage film reel that has been collecting dust in an ancient projection booth. Toss in some stop-motion visual effects, and you have a film that’s as indebted to Ray Harryhausen as it is to Ray Bradbury. Dan Deacon’s intoxicating electronic score further adds to the vague-yet-specific style of the film.

All of this is well and good and makes for an unendingly visually interesting film, but the story that these aesthetic choices are supporting, unfortunately, doesn’t add up to much. It appropriately mixes and matches classic storytelling tropes, at times finding itself firmly planted in an unlikely romantic tale and at other times broadcasting a paranoid world vision straight out of classic sci-fi. It’s a speeding blender of a story, with ideas flung about that don’t ever congeal into something clear. That’s not to say it’s a confusing movie; it just doesn’t seem to be interested in telling a story from which the audience can take anything. It’s all fairly difficult to connect with emotionally and no amount of visual ingenuity can save that.

It’s a bit frustrating how accomplished “Strawberry Mansion” is in a visual sense while simultaneously falling flat on an emotional level. It ultimately seems to point to a fairly standard anti-materialist message, like any number of sci-fi movies. Ultimately, “Strawberry Mansion” is a feast for the eyes, but it doesn’t provide much nutrition for the soul.