“RITA MORENO: JUST A GIRL WHO DECIDED TO GO FOR IT” 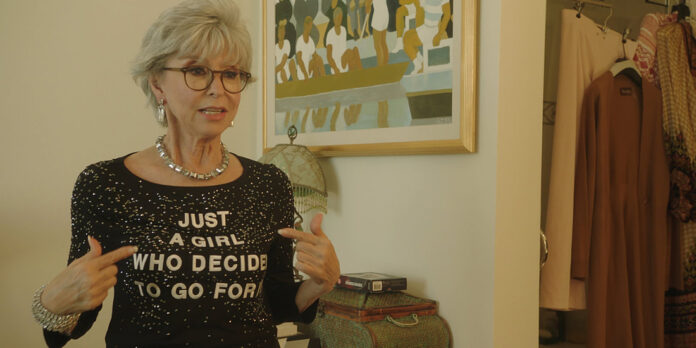 THE STORY – Talented, energetic, and full of joy, Rita Moreno has been dazzling audiences for over 70 years. Whether showcased on television, film, or stage, her artistry transcends singing, dancing, and acting, as she continuously reinvents herself and pushes creative limits. Moreno is a pioneer and one of the most authentic performers of our time, and she has the EGOT status to prove it.

​​​​​Rita Moreno is a legend among legends with a career that most actors would be lucky to partially replicate. But the road to success hasn’t always been easy for her and it has certainly been an uneven one, even after achieving the heights of awards success. As the charming and revealing new documentary “Rita Moreno: Just a Girl Who Decided to Go for It” shows, her story is one of triumph and frustration in almost equal measure. Its title may seem overly lengthy, but by the end of the film, it’s clear why that phrase truly applies to Moreno.

A performer practically since birth, Rita Moreno has been in show business since she was a teenager. Growing up as a Puerto Rican immigrant in 1930s New York City, she used her natural charisma and obvious talent to work as a successful dancer before landing a contract at MGM. After playing an array of wide-ranging and stereotypically ethnic smaller roles, she finally found international fame with her legendary Oscar-winning performance as Anita in “West Side Story.” But even that didn’t mean immediate success, with most of the parts being sent her way still firmly in the realm of stereotype. She carved out the next era of her career in a variety of areas, including children’s television and the Broadway stage. This led to her becoming one of the very first ‘EGOT’ winners, an achievement that is still rare to this day. In this documentary, director Mariem Pérez Riera probes into this career with Moreno herself providing insightful and honest commentary.

Moreno makes for an inherently fascinating subject and the actress is not shy about sharing every little detail about the ups and downs of her life. Most of the film revolves around interview footage of Moreno that was taken in her house with her many awards prominently displayed behind her as a reminder of her importance. She talks with excitement about the more glamorous parts of her life and also bravely discusses her struggles with stereotyping, racism, sexual assault, and a suicide attempt. Little is left to the imagination and Moreno shows no hesitation in exhuming the uglier parts of Hollywood’s Golden Age. The film’s greatest success is in the way it shows that, despite Moreno being able to succeed as a Hispanic-American woman in a famously white-centric business, she and other women like her had a very difficult time. Moreno provides details that help paint a specific portrait of this time in the industry, such as her describing the generalized “ethnic accent” she used in roles knowing nobody on the film’s crew understood the difference between different accents or even cared. As one of the interview subjects puts it, Moreno was able to succeed despite structural impediments in her way, but who can tell how big she could’ve been without them. It’s the unfortunately classic American tale of a performer of color needing to have twice the talent but still only receiving half the success of their white colleagues.

While Moreno’s story is interestingly told, it can’t be said that this documentary breaks any new ground with its filmmaking. It’s fairly linear in its birth-to-present-day biographical structure; it just so happens that the documentary’s subject is so captivating that the film can get away with it.

As the legendary Norman Lear says in one of the film’s interviews, “I can’t think of anybody I’ve ever met in the business who lived the American dream more than Rita Moreno.” This documentary shows just how correct he is, especially given the fact that America was so often working against her. Any fans of hers or classic show business stories would appreciate this look into her legendary life.