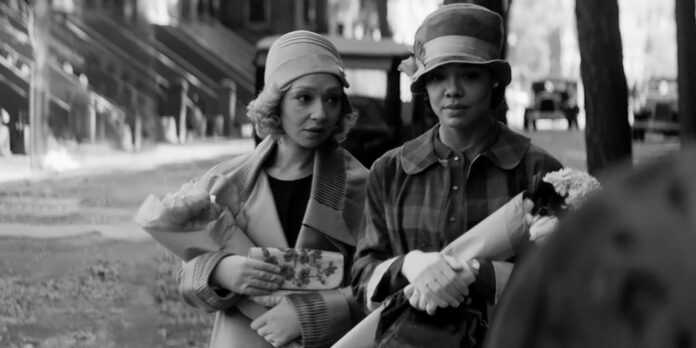 THE STORY – Irene Redfield (Tessa Thompson), a refined, upper-class 1920s woman, finds breezy refuge from a hot summer day in the grand tearoom of New York City’s Drayton Hotel. Across the room, she spots a blond woman staring her down. Irene wants to steal away, but before she can, Clare Kendry (Ruth Negga) rushes over to stop her. It turns out the two were in high school together, and while both are African American women who can “pass” as white, they have chosen to live on opposite sides of the color line. Now, their renewed acquaintance threatens them both.
​
THE CAST – Tessa Thompson, Ruth Negga, André Holland, Alexander Skarsgård & Bill Camp

​​Actors have been taking up the director’s mantle for as long as film has been around, and Rebecca Hall is the latest to make the transition with her debut feature “Passing.” For her first time in the director’s chair, she’s chosen quite an ambitious project: an adaptation of Nella Larsen’s novel about racial identity set in 1920s New York. Hall makes the wise choice to keep her story small and focused, zeroing in on the relationship between the two women at the story’s center and how it shakes their worldviews. Aided by a pair of phenomenal performances from Tessa Thompson and Ruth Negga, “Passing” is an assured look into the ways that society shapes identity, especially for African-Americans.

The two women at the story’s center are Irene (Tessa Thompson) and Clare (Ruth Negga). The pair were childhood friends who one day have a serendipitous reunion. Irene is surprised to see that Clare has taken up the guise of a white woman in order to “pass” in society, and doing so has allowed her to marry a white man. Irene is at first horrified by Clare’s tolerance of her husband’s blatant and proud racism, but as the two become close again, they slowly give each other a look into their respective worlds and specific ideas of identity.

To capture this time and place, Hall employs black-and-white photography. Along with the playful use of shallow focus, she creates a hazy, dream-like world for her characters to inhabit. This is a New York of the past that doesn’t look or feel like the actual photos and movies from the time. The film also uses a smaller aspect ratio than usual, reflecting the constrained, meticulous environment that Irene, our central character, inhabits. These visual choices lead to some stunning images, especially when paired with the way the film manipulates light. One shot specifically impressed me; Irene and Clare embrace in the middle of the street during a dramatically poignant moment. They are framed at the very bottom of the screen in a way that makes the world around them look extra big and imposing. This and other moments mirror the characters’ concepts of the world around them because of the habits and behaviors they’ve been forced to adopt.

While Hall makes some bold choices that pay off, there are some decisions that stand out conspicuously rather than appropriately contributing to the film’s environment. Some showy moments towards the film’s conclusion stand out in particular and don’t quite accomplish what they’re clearly meant to. Still, it’s overall a well-directed film that is appropriately calibrated to the scope and type of story being told.

However, all of this would be for naught if the two performances which the film is built around weren’t up to the task. Fortunately, both women turn in work that is both real in the movie and somewhat heightened in a way that reminds the viewers of the past’s acting styles. Thompson is tightly-wound and deliberate in her mannerisms, which brings a guarded, well-practiced caution to the character. We’ve seen Thompson play significant characters before in movies like “Thor: Ragnarok,” which makes her particular character choices here all the more impressive. But Negga is perhaps the best thing about “Passing.” She uses her highly expressive features to convey a world of hidden emotions and thoughts. Clare is a rehearsed, perfected character-within-a-character, and Negga is more than capable of playing the subtext and the perceived meaning of every gesture and comment she is tasked with delivering. She gives the impression of a beautiful butterfly trapped behind glass. It’s a wispy, haunted performance and the key to the film’s success.

“Passing” is a captivating study of the dual nature of identity: the one we present to the world and the one we feel within ourselves. It explores a period in African-American history that is so often not talked about in the mainstream and looks at it with understanding and quiet sadness.