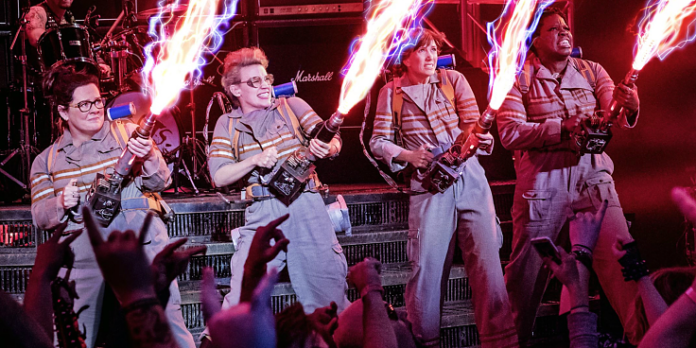 THE STORY – Paranormal researcher Abby Yates (Melissa McCarthy) and physicist Erin Gilbert are trying to prove that ghosts exist in modern society. When strange apparitions appear in Manhattan, Gilbert and Yates turn to engineer Jillian Holtzmann for help. Also joining the team is Patty Tolan, a lifelong New Yorker who knows the city inside and out. Armed with proton packs and plenty of attitude, the four women prepare for an epic battle as more than 1,000 mischievous ghouls descend on Times Square.
​
THE CAST – Kristen Wiig, Melissa McCarthy, Kate McKinnon, Leslie Jones & Chris Hemsworth

I’ll admit it. “Ghostbusters” was not at the top of my list for films I wanted to see a reboot for in 2016. It was also not marketed very well as the trailers for this film certainly managed to only show the worst parts of the movie in an inconsistent manner which only helped to fuel audience contempt leading up to its release. Not to mention, the selection of an all-female led cast as replacements for the male-led cast in 1984 sparked a ton of public debate and controversy. I am happy to report that even though it’s not perfect, the 2016 version of “Ghostbusters” manages to be an entertaining time at the movies.

​Erin Gilbert (Kristen Wiig) has an obsession with the paranormal which she explored long ago with her friend Abby Yates (Melissa McCarthy). Together the two wrote a book on the subject but their career differences separated the two and now Erin is a teacher seeking tenure while Abby continues to study the paranormal with her wacky engineer friend Jillian Holtzmann (Kate McKinnon). When Erin’s past activities with the paranormal come creeping back into her life and land her out of a job, she finds herself re-teaming with Abby to answer the call for any spooky ghost-like activity taking place within New York City. With the help of a New York City Mass Transit worker named Patty Tolan (Leslie Jones) and a new male secretary in Kevin (Chris Hemsworth), who may be pretty to look at but is pretty much terrible at his job, the group comes together to form the Ghostbusters.

Let’s start off right away with the cast. Like many, I was very hesitant when the trailers failed to showcase the talented cast of ladies I knew that had been chosen by Paul Feig for this film. If you think about it, tell me this….was Kate McKinnon (Who steals the movie) featured properly in the trailers leading up to the film’s release? If your answer is no, then you’re right. Leslie Jones also has a ton of funny and memorable parts while Melissa McCarthy reminds us that she too can be quite a joy when she isn’t being typecast as the “fat and loud” type. Kristen Wiig however, has the conventional role of the straight woman and as a result, she is the most forgettable of the cast. However, it’s Chris Hemsworth who will probably get most of the laughs playing the clueless but gorgeous secretary Kevin Beckman. Altogether, however, the four ladies really do shine and their comedic timing is on point. When you add Hemsworth to the proceedings, that is when the film really excels.

Paul Feig is carving out a name for himself within the world of comedy with fantastic films such as “Bridesmaids” and “Spy.” While both of those films carried the R rating label, “Ghostbusters” does not and I cannot help but feel that it suffers for it. This film manages to do everything it can with the rating it has been given but it is lacking that extra punch to make it really meaningful as far as repeat viewings go. I’ll probably stick to the original on that front. Another note to touch on are the special effects for this 2016 reboot. While they are obviously better than the 1984 film’s and its sequels, they’re still not as convincing as one would hope and come off as more distracting than anything, especially in the film’s third act when the apocalyptic showdown commences. There are at least two genuine jump scare moments though that took me by surprise.

And that is the best way I can describe the 2016 version of “Ghostbusters,” a surprise. Paul Feig and his cast do the best that they can despite the fan backlash and prejudice thrown at this movie before its release and they even manage to take jabs at those critics within the film itself. I commend the entire team on their efforts for the film isn’t necessarily perfect but it turned out to be a whole hell of a lot better than the internet would have led you to believe 5 months ago. Genuine scares, excellent cast chemistry (And surprise cameos!), and a few non-rated R laughs, “Ghostbusters” is a summer blockbuster that may not bust your gut from laughter but will have you smiling in surprise.