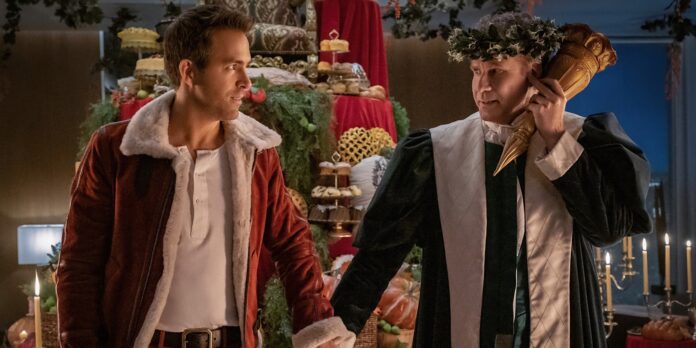 THE STORY – A musical version of Charles Dickens’ story of a miserly misanthrope who’s taken on a magical journey.

Reader, I have to be upfront about this: By rights, I should very much hate Sean Anders’s “Spirited.” While I like Ryan Reynolds, I am at best ambivalent about Will Ferrell. I have no particular fondness for Christmas movies, and I prefer my musicals led by people who can actually sing (and also not scored by Pasek and Paul). And yet, I do not hate “Spirited.” To be clear, I don’t think it’s a masterpiece, either, but the fact that I lean positive on a film that hits so many of my personal pet peeves is very much a credit to the film and how successful it is at what it’s doing.

What it’s doing, essentially, is mashing up Charles Dickens’s immortal “A Christmas Carol” with “Monsters, Inc.”, taking us inside the process of turning a Scrooge into a good person by following the Ghosts of Christmas Past (Sunita Mati), Present (Ferrell), and Yet-To-Come (voiced by Tracy Morgan) through their work. Present has been eligible for retirement for the past 46 seasons but is unsure if he’s ready to take the retirement package (becoming human again). Just when he’s most considering it, he spies “the perfect combination of Mussolini and Seacrest:” Clint Briggs (Reynolds), a media consultant so cynical about everything that the operation’s head, Marley (Patrick Page), has deemed him “Unredeemable.” But Present believes that Briggs is the perfect candidate to be redeemed and pours himself into creating a Christmas Eve haunting that will not only convince Briggs that people are capable of change but change him into a good person.

The screenplay, by Anders and John Morris, has good bones, largely because the “Christmas Carol” story is so sturdy, and the hook of telling the story from the point of view of the ghosts is pretty novel. But while Reynolds’s brand of snark is perfect for Briggs, it makes for a somewhat uneasy fit with the musical genre. There are so many snarky quips about the fact that “Spirited” is a musical – exhortations to stop singing, conversations about how exhausting the dancing is, disbelief that people are singing and dancing – that it almost feels as though the filmmakers were embarrassed to be making one. There are few things worse than a musical that is afraid to be a musical, and at every step, “Spirited” hedges its bets as though it felt compelled to justify its existence to all the people out there who don’t like musicals. Thankfully, the musical sequences are well-shot and edited, showcasing Chloe Arnold’s vivacious choreography instead of hacking it to bits. And while neither Ferrell nor Reynolds are trained singers, they at least understand how to act their songs, filling them with enough personality to put them over even when the songs are out of their range.

And what catchy songs they are! The Oscar- and Tony-winning songwriting duo of Pasek and Paul have put together their best set of songs to date, creating a classical musical score that feels specific to these characters in these situations – the bare minimum for songs in a musical to do and yet somehow this is the first time they’ve done it for a movie musical. While the songs are all pastiche, they’re well-done pastiche, and the melodies will stick in your head long after the film is finished. Some of the songs are too big for singers this limited, and it’s in those big moments when their thin voices lose all personality, ironed out by AutoTune.

Yes, all of this sounds more negative than positive. But the magic of “Spirited” is that it manages to work despite all these issues, largely because of the level of commitment from everyone involved. Ferrell and Reynolds make a great pair, bouncing off each other like the tremendous comic teams of yesteryear. Ferrell turns in a genuinely great musical performance full of feeling, and Reynolds holds his own during both the big dramatic scenes and the musical numbers. Anders’s direction is crisp and clean, and while the screenplay may take a few twists and turns too many in the second half, it at least adds some genuine intrigue to a very familiar story. Whatever reservations I may have about “Spirited” as a musical, it is absolutely a great Christmas movie, serving as a strong reminder of one of the main lessons of Dickens’s original text: Being a good person isn’t just for Christmas, and while it’s easy to be cynical about a person’s capacity for change, once you decide to put someone else before yourself, it puts you on a path to being a better person beyond that one instance. In the world of “Spirited,” no one is unredeemable, and these days, that sounds like a mighty nice world to live in.