“SPIRAL: FROM THE BOOK OF SAW” 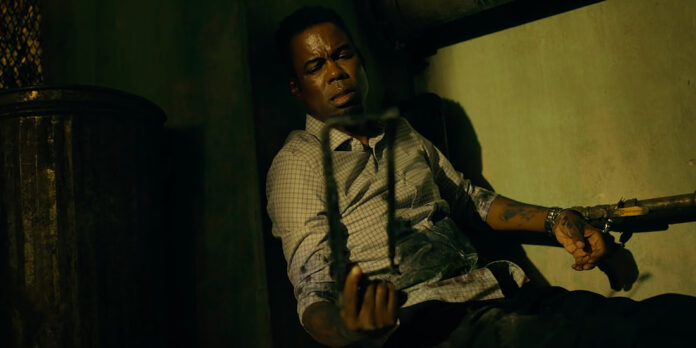 THE STORY – Working in the shadow of his father, Detective Ezekiel “Zeke” Banks and his rookie partner take charge of an investigation into grisly murders that are eerily reminiscent of the city’s gruesome past. Unwittingly entrapped in a deepening mystery, Zeke finds himself at the center of the killer’s morbid game.​
​
THE CAST – Chris Rock, Max Minghella, Marisol Nichols & Samuel L. Jackson
​
THE TEAM – Darren Lynn Bousman (Director), Josh Stolberg & Peter Goldfinger (Writers)
​
THE RUNNING TIME – 93 Minutes

​Horror franchises have always been an interesting commodity in the cinematic landscape. On the surface, they would appear to be a reoccurring formula that quickly reaches a state of diminishing returns, turning more stale with each subsequent entry. However, even when the quality is not always consistent, something is fascinating about watching a series of films that span decades and witnessing how styles evolve and cultural sentiment shifts. Even amongst the monotony, subtle shades of nuance to the presentation make each discovery an intriguing artifact. There have been several notable franchises throughout the years, and the “Saw” films hold a bold distinction due to their recent longevity. The latest submission, “Spiral,” tries to carve out a unique path of its own. It accomplishes this with mixed yet somewhat compelling results.

The elaborate murders committed by John Kramer, aka Jigsaw, have been well established in the world of this film, but his death has never stopped the carnage before. A new series of bodies are now being discovered, with the focus being placed on a corrupt police force. Detective Zeke Banks (Chris Rock) is leading the investigation alongside his new rookie partner William Schenk (Max Minghella). It doesn’t take long for Banks to discover a sinister connection linking these cases, one that ties back to unseemly behavior that has cast a dark cloud over his career. With his overbearing father and former police chief (Samuel L. Jackson) also getting involved, the games will eventually reveal the insidious secret that lies waiting for Banks to discover. That truth may be more terrifying than any of the grizzly displays.

Even at its lowest points, the hallmark of the “Saw” films has always been two primary ingredients: the creative execution of the elaborate death traps and the intricate construction of the plot that relies heavily on playing with perceptions of time. Here, neither one seems to be given that much attention. The plot does contort itself a bit with flashbacks and parallel editing, but it mostly sticks to formulaic rules that don’t push the series further than where it’s gone previously. As for the deaths, they are appropriately graphic in their violence, but they also lack an element to make them distinctive. Motivation played a crucial role in every design, but the setups feel relatively pedestrian here. This sentiment extends into the overall script, which trades on tired clichés and twisty resolutions that can be spotted miles away without any real effort made at subversion. All of this is felt even more sharply by a rushed and stilted finale.

Still, credit should be given for the work to slightly reinvent the traditional storytelling these films thrived on in the past. Instead of following a certain number of people encountering a series of brutal tests that increase in difficulty, writers Josh Stolberg and Peter Goldfinger do enable more of a mystery at the center. Watching characters decipher the clues in front of them does make for a more captivating narrative. While one wishes more prodding could be done with the premise of a killer looking to dismantle evil forces within the police department (a timely theme that is perhaps more resonant than was initially intended), there is much entertainment to be had. Darren Lynn Bousman returns as the director after helming several of the previous sequels. There is still an aspect of anonymity to the aesthetics that are not that very engrossing. However, this is by far the best-looking “Saw” film produced as of yet, so kudos to the dynamic cinematography.

The presence of Rock immediately infuses the film with a level of comedy not previously seen in the series, and it’s actually quite welcome. There’s a distinctly buoyant energy that he brings to every scene, and while not every joke lands perfectly, he maintains an endearing screen presence. Speaking of, it’s hard not to be entranced by Jackson’s persona even when he is asked to do very little. To be honest, not much is required of him here either, but it’s impossible not to be charmed by his natural charisma in his brief collection of scenes. Minghella has been an impressive actor before, but he’s not delivering a particularly memorable performance here. The lack of chemistry he shares with Rock does not help matters either. The rest of the supporting players dissolve into a sea of serviceable yet unimpactful turns.

It’s always tricky to judge how someone who is not already invested in a franchise will fare with a new installment, especially one that is as many films deep as this one. There are many components about “Spiral” that seems intent on making a product that could appeal to such individuals. The commitment it has to innovate its storytelling is appreciated, and there are many moments when it finds success in the intriguing suspense it crafts. At the same time, what’s underneath that mystery is lacking in substance. The script struggles to create a totally engaging portrait as it relies too heavily on banal tropes and, the greatest sin of all, very uninspired death scenes. Still, there’s an energy provided that can be attractive, particularly by Rock’s performance. In the end, one can undoubtedly say this franchise has seen better selections than this one. However, it has also seen far worse. That’s enough to provide the interest to see where these stories may continue in the future, with more opportunities for potential further evolution.