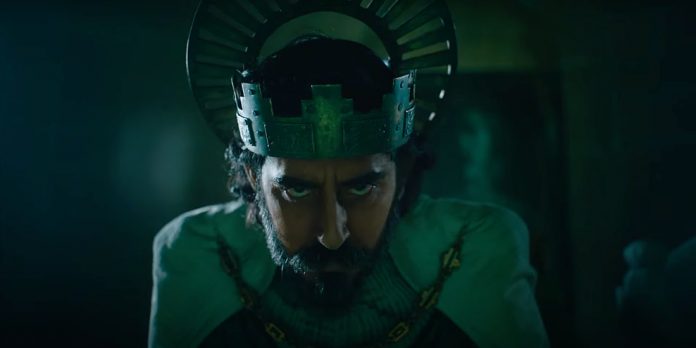 By Matt Neglia
​
A24 has released the new trailer for “The Green Knight” starring Dev Patel, Alicia Vikander, Joel Edgerton, Sarita Choudhury, Sean Harris, Kate Dickie, Barry Keoghan and Ralph Ineson. Originally set to come out last year, the David Lowery (“A Ghost Story“) directed film was delayed due to the COVID-19 pandemic and will now release on July 30th.

Plot Synopsis: An epic fantasy adventure based on the timeless Arthurian legend, “The Green Knight” tells the story of Sir Gawain (Dev Patel), King Arthur’s reckless and headstrong nephew, who embarks on a daring quest to confront the eponymous Green Knight, a gigantic emerald-skinned stranger and tester of men. Gawain contends with ghosts, giants, thieves, and schemers in what becomes a deeper journey to define his character and prove his worth in the eyes of his family and kingdom by facing the ultimate challenger.  From visionary filmmaker David Lowery comes a fresh and bold spin on a classic tale from the knights of the round table.

What do you all think of the trailer? The first teaser had us all very excited and has sustained us for over a year. It’s great to finally see some new footage from what looks like David Lowery’s best film yet (hopefully?). Dev Patel and the rest of the cast look to be filling their roles perfectly but the real standout here is the cinematography and overall look of the film which combines both fantasy and the medieval epic to create something that looks wholly original. And the fox talks?! Needless to say, I couldn’t be any more excited. What do you think? Let us know your thoughts though in the comments below or on our Twitter account.