“THE WOMAN IN THE WINDOW” 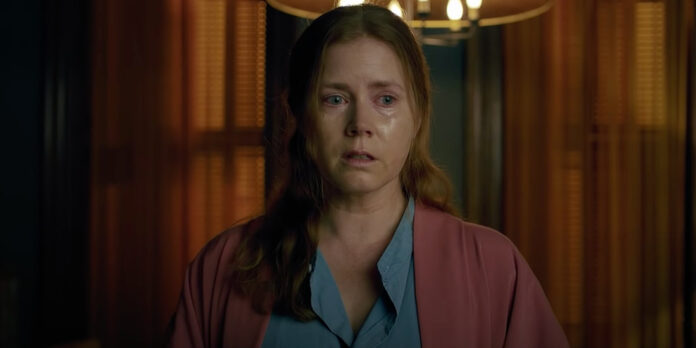 THE STORY – Agoraphobic Dr. Anna Fox witnesses something she shouldn’t while keeping tabs on the Russell family, the seemingly picture-perfect clan that lives across the way.

5/13/2021
​By Dan Bayer
​​
Put aside for the moment, if you can, everything you’ve heard about the film adaptation of A.J. Finn’s acclaimed bestselling novel “The Woman in the Window.” Forget about the tales of terrible test screenings, the rewrites, and the reshoots. Forget about the multiple delayed release dates. Forget that one of our most esteemed playwrights wrote the screenplay and that a certain horrible person who has been in the news recently produced it. Put all that aside and take the film as it exists on its own: A woman-in-peril thriller about a woman trapped in her house by agoraphobia, drinking, and spying on her neighbors to pass the time – something everyone can relate to after the year-plus we’ve all just been through.

Dr. Anna Fox (Amy Adams) is an unreliable narrator. She’s also an agoraphobic child psychologist, but that’s not nearly as important as the fact that she’s on new medications that she liberally mixes with alcohol. This dangerous combination only increases the likelihood that she will have hallucinations. This proves to be a big problem after seeing her new neighbor murder his wife – with whom Anna just had a pleasant conversation a day or two before. From across the street. At night. After drinking, who knows how many glasses of wine and taking who knows how many pills. Naturally, she calls the cops, and naturally, her neighbor presents a woman Anna does not recognize as his wife. What is going on? Can Anna trust her own eyes? Can the audience? And if Anna can be trusted, then who did she see get murdered?

This is a pretty great set-up for a lurid potboiler; a trashy Hitchcock rehash in the Brian DePalma vein. And Joe Wright is doing everything he can to dial up the tension – working with genius cinematographer Bruno Delbonnel to create frames so full of contrasting colors that they will give you anxiety, using the fantastic production design to keep you hunting for clues in every corner of the frame, dialing up the Danny Elfman score to manic levels, and keeping the editing moving at a fast pace. All this style works, in spurts, enough to trick you into thinking that “The Woman in the Window” is great, or at least great fun, for long stretches. But unfortunately, all that style is just covering up the fact that there is a black hole at the center of the film: There’s no THERE there, and no amount of style can cover that up.

Not that all this style isn’t purposeful: The anxiety-inducing color scheme and florid camerawork are meant to put us into the protagonist’s headspace, and the score is playing with classic thriller themes and styles. These are the things you hire Bruno Delbonnel and Danny Elfman for, after all, in the same way that you hire Gary Oldman if you want someone to go full ham menacingly, Julianne Moore if you want someone to go full ham in a flighty way, and Amy Adams if you want someone to be frayed around the edges but still have a core of trustworthiness. Everyone is doing something that they’re very good at, but putting them all together in the same film is just too much. When this many people are giving more than one hundred percent, your film needs a strong core to keep it from flying off the rails, and “The Woman in the Window” unfortunately doesn’t have one.

There are essentially three places where this film could have found a strong core: the screenplay, the lead performance, and the direction. The screenplay (officially credited to Tracy Letts, but doctored by Tony Gilroy) gives the film a decent if unimpressive foundation – any larger themes that may have been present in the novel have been jettisoned in favor of focusing solely on the plot, which includes the question of Anna’s state of mind. Adams is not giving a bad performance, per se, but her more naturalistic approach is like a needle scratch on the record of the genre fun that everyone else is bringing to the film. It is a valid choice to have Anna feel like the one real person in a world inhabited by cartoon characters, but it takes the wind out of the film’s sails since it is pretty clear that she’s saner than everyone thinks she is. Wright is also trying to have fun and has designed a couple of set pieces that go in bold and stylistic directions for a trashy mainstream thriller like this. This is a genre known for florid excess, and Wright absolutely drenches the film in it. Trying to re-insert the source material’s themes through style is another valid choice, but it throws the film off-kilter, leaving it feeling less fun to watch than intended.

Knowing the genre the film is playing with, there is some fun to be had for the first half of the film. The insinuating dialogue and color-coding of the first act provide a good puzzle for those who enjoy trying to figure a movie out and predict its ending. But after the first big reveal, when it is clear that Wright has blown his stylistic load with a half-hour left to go, the last act feels tired and predictable. It’s a shame. Many talented people brought their A-game to “The Woman in the Window,” but it just doesn’t come together satisfyingly. It’s almost enough to make you want to see the original cut to see if all that drama surrounding this film was worth it. Yes, it could have been worse, but being worse might have perversely made it more fun.