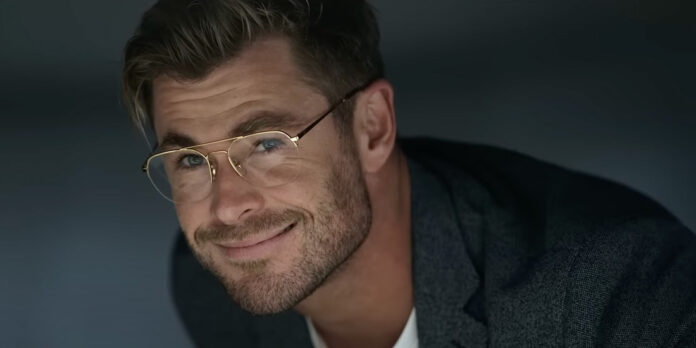 THE STORY – Two inmates form a connection while grappling with their pasts in a state-of-the-art penitentiary run by a brilliant visionary who experiments on his subjects with mind-altering drugs.

Director Joseph Kosinski, fresh off his success with “Top Gun: Maverick,” reunites with Miles Teller in the new science-fiction thriller, “Spiderhead,” where sadly, Teller’s already famous mustache is missing. The film is based on George Saunders’s short story that first appeared in The New Yorker, “Escape from Spiderhead,” and imagines a unique prison facility where convicts can volunteer to be part of scientific experiments involving chemicals that control how they feel and behave in exchange for their sentences being shortened.

Steve Absenti (Chris Hemsworth), the head of the program, is testing emotion-altering drugs administered through a port in each prisoner’s back with the levels controlled by an app on his phone. He’s performing these experiments to see if he can scientifically create love, amongst other things, which are shrouded in mystery for much of the film. In exchange for being a part of the testing, the prisoners get fancy food, arcade games, and private bedrooms – which Steve considers a worthy trade-off instead of a traditional prison. The story centers around Jeff (Teller), an inmate haunted by a crime he committed, who feels obliged to participate in the experiments. He also has an uneasy friendship with Steve, who seems to respect him above all the other prisoners and even seeks his approval. Jeff also forms a close bond with another inmate, gifted cook Lizzy (Jurnee Smollett), who is similarly skeptical of the experiments they are taking part in. There are some cute moments of Jeff and Lizzy bonding with each other as they’re all each other has in the facility, which no one can leave, but those scenes are underscored by the secrets the two are hiding from each other regarding their past. The premise of “Spiderhead” doesn’t seem like it would lend itself well to having a love story at its core. Yet, it serves as a great reminder of Jeff’s humanity and the genuine emotions that Steve hopes to create synthetically.

The premise of “Spiderhead” is more frightening and interesting than the actual film. The chemically induced drugs with names like “Verbaluce” to enhance talking and “Darkenfloxx” to give the user bad thoughts feel a little too close to our world to be comfortable, as does the idea of a big pharmaceutical company taking advantage of inmates in this way. But, despite the eerie, largely empty, and sterile environment created by the stripped-down set, it never succeeds in ramping up the fear factor. The action sequences towards the end fall particularly flat, for the film is at its best when it’s focused on the relationship between Steve and Jeff, both played well by Hemsworth and Teller.

The three central performances are enough to save the film from being a complete chore to sit through. Teller gives another solid performance in a long line of many, revealing his character’s inner conflict over the experiments he’s taking part in, sometimes with disastrous consequences due to their scientific and unpredictable nature. Smollett’s performance builds up to an impressive experimentation scene when she shares the heartbreaking secret she’s been keeping so emotionally hidden that it’s difficult to watch as she bares her soul so nakedly. Though all three are great, Hemsworth’s performance is the most impressive, as it’s very different from his typically more rigid roles. From his wire-rimmed glasses to his jaunty little walk as he heads to another experiment, he slides into the role of the evil scientist with surprising ease. He’s persuasive enough that you can understand how he got this far with his ideas and charming enough to understand why Jeff’s drawn to him. But at the same time, he creates something sinister lurking underneath Steve’s surface, just waiting to break free.

Ultimately, as fascinating as the concepts and performances of “Spiderhead” are, they’re unable to overcome Rhett Reese and Paul Wernick’s underbaked script. The first part of the film is so purposefully confusing before everything is revealed that it’s more frustrating than engaging. The film’s middle section is the best, as everything begins to come together before the underwhelming ending, demonstrating that the writers weren’t sure how to wrap everything up.

Joseph Kosinski’s polished visuals and gift for creating an engaging experience for an audience are entirely on display, even if “Spiderhead” is one of his more self-contained projects. For those interested in dystopian science fiction or keen to see Hemsworth in a non-himbo role, “Spiderhead” is perhaps worth a watch on Netflix. But the cast can’t fully elevate a film that never lives up to its main idea – no matter how fun it is to watch Hemsworth descend further into his madly committed scientist role.