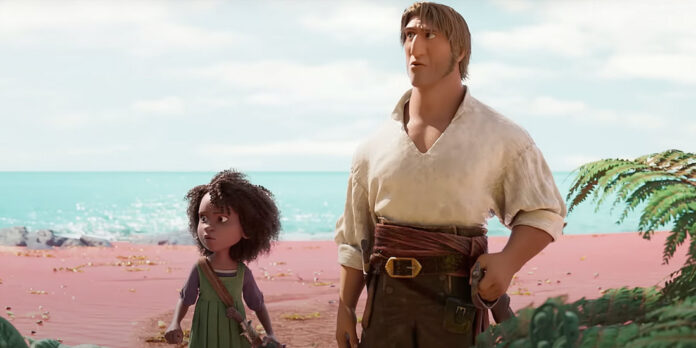 THE STORY – The life of a legendary sea monster hunter is turned upside down when a young girl stows away on his ship.

​​​They may not be Disney or Pixar, but Netflix has slowly been making a name for itself in the animation sector. From “The Mitchells vs. the Machines” to “Klaus” and “I Lost My Body,” Netflix has presented itself as a studio willing to tell stories that nobody else will touch and giving them a worldwide platform. This time, they are working with Chris Williams, a Disney animator who previously directed “Bolt,” “Big Hero 6” and co-directed “Moana” in a collaboration that will surely conjure up nostalgic feelings for some of Disney’s old storytelling tropes from the 90s in particular. It turns out that Moana is not the only heroine ready to explore the open waters as “The Sea Beast” provides a ton of action and heart in a rousing adventure worth taking on the digital streaming platform.

In an era when enormous sea creatures terrorize defenseless ships, brave hunters set sail to protect the regular townsfolk. The most famous hunting ship is the Inevitable, captained by the legendary Captain Crow (Jared Harris) alongside his surrogate son, Jacob Holland (Karl Urban). When the King and Queen make a request to chase down a fearsome beast known as the Red Bluster, they embark on the mission, unaware that a young child has stowed away on their ship. The child, Maisie Brumble (Zaris-Angel Hator), has dreams of becoming a hunter herself and is presented with an opportunity to go on the journey and experience the hunt of the Red Bluster first-hand. Fighting the treacherous seas and deadly gargantuan sea creatures is only the beginning of the twists and turns that Maisie, along with Jacob and the rest of the crew, will experience on this mission.

“The Sea Beast” makes a strong initial impression with its expansive world-building and gorgeously rendered animation (especially the water effects). It is easy to be taken aback by the attractive animation style, and the production design work even within the separate locations, especially the ships these characters find themselves on for most of the film’s runtime. The sequences out at sea are stunning, which is something that has clearly carried over from Williams’ work on “Moana.” It is also great to see the animation team having fun with the creature designs, both big and small, as the bold colors make the creatures stand out against the sea and the ships with clarity and helps to give them personality (imagine seeing animated versions of the monsters from “Love And Monsters“). Projects such as this showcase the potential for creativity in a field where it feels like so much has already been done, but when given the freedom to design whatever one can imagine, it can be tremendously exciting.

“The Sea Beast” also surprisingly provides a significant level of detail within its screenplay which only adds to the film’s compelling blend of fantasy and history. When we first meet the eclectic cast of characters, there are already legendary tales of the travels made by the Inevitable ship and the crew on board. The use of Maisie’s storybook telling these iconic tales not only brings back a classic trope of storytelling found in such animated classics such as “Snow White and The Seven Dwarfs,” but it also fleshes out the world and makes the journey much more compelling.

Some of the voice performances found in “The Sea Beast” make it difficult to truly immerse one’s self into the narrative at first. At moments, it feels like the voices are not matching up exactly with the animation, and it becomes easy to split the two apart. This is specifically apparent with Jacob, as the character’s design did not quite suit the vocal performance Urban was going for (especially with his accent coming in and out). However, as the story continues, the strength of the film’s writing for its characters whisked away such worries. However, the issues with the film’s sound work does not end there. For a movie with giant sea battles featuring thunderous cannons and ravaging waters from extremely large sea creatures, the film’s sound design, in general, is lacking when compared to the visuals, with some aspects of the film’s production almost feeling incomplete. While there are some nice touches within the score by having sea shanties featured prominently throughout, it could have been done with a grander scale to match the epic storytelling. Even during the battle sequences at sea, it seems like much more attention was given to the visuals rather than creating a truly immersive experience with the sound.

Children will undoubtedly enjoy “The Sea Beast” due to the delightfully vibrant creature designs and relation to a true heroine in Maisie. However, there is plenty here to make this a good viewing experience for the entire family (despite the technical issues mentioned above), and it all comes down to the story’s heart. Both leading characters, Jacob and Maisie, do not have the traditional families usually represented in animated films. Such a unique bond is one that feels organic alongside their urges for adventure. While it may initially seem that the journey is a mission to hunt a monstrous beast, it becomes much more emotional; it’s a way for Jacob and Maisie to connect and grow, and how Williams handles these themes and the two characters is beautifully told. On paper, the narrative may seem predictable, and the film does not present anything new and refreshing. However, the savvy dialogue and strong character development enable us to care about the story and the direction the narrative steers in, especially when it reaches the final act.

Once again, Netflix has proven to be competitive in the animation space with another well-told and very well-animated feature film. There may be some technical aspects that could’ve been tightened up, but it is hard not to be impressed with the world that Chris Williams has created in “The Sea Beast.” With the prominent animation studios starting to lose their spark for some by focusing on sequels and familiar properties, Netflix is focusing on delivering original stories filled with heart and passion. You don’t need just to let your kids sit in front of the television as a form of distraction; take a seat yourself and go on the journey of watching “The Sea Beast” with them.​