“FATHER OF THE BRIDE” 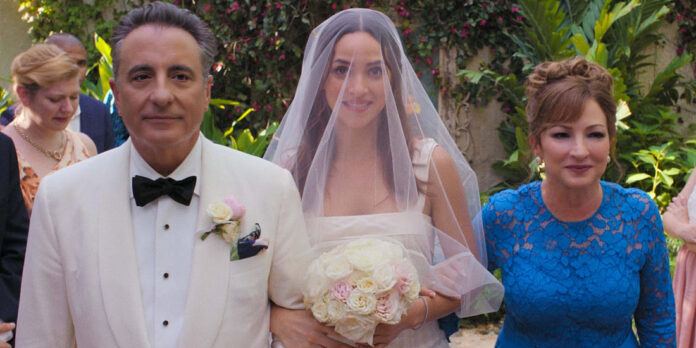 ​If you’re going to remake a beloved film, it helps if you have a good reason. The new “Father of the Bride” is the third adaptation of the 1949 novel of the same name by Edward Streeter. The first iteration in 1950 starred Spencer Tracy, while the 1991 film allowed Steve Martin to put his own comedic spin on the role. The new film, directed by Gary Alazraki and written by Matt Lopez, reimagines the story to center around a Cuban-American family.

Billy Herrera (Andy García) immigrated to the United States as a young man and parked cars to put himself through college. Now he’s the head of a successful architecture firm and a loving father to two children, but he’s less successful as a husband as he and his wife Ingrid (Gloria Estefan) are in therapy. She’s frustrated with his need to control everything and his unwillingness to mend his ways, so she finally asks him for a divorce. Meanwhile, younger daughter Cora (Isabela Merced) has her own troubles. An aspiring fashion designer, she’s tired of being compared to her sister and wants to use her college fund to start her own business, but her father wants her to follow a more traditional route. The golden child eldest daughter (Adria Arjona) is returning from New York City, where she works as a lawyer, for a visit. Ingrid wants to announce their divorce over dinner, though Billy would rather wait. But just as they’re about to, Sofia shares news of her own: she’s engaged to a man she met at work. Her father is shocked and somewhat horrified though her mother and sister are thrilled (These beats will be largely familiar for anyone who has seen previous versions of the film). Even worse for Billy is that the couple will move to Mexico, where Sofia’s fiancé is from, to work in a non-profit. Adan (Diego Boneta) is essentially the perfect man. He’s kind, intelligent, and devoted to Sofia – but that’s not enough to satisfy her father. The final bomb dropped is that they want to get married in one month to have it done by the time they move to Mexico. Sofia and Billy clash over their expectations for the wedding as they want a small, intimate affair, while Billy wants a fancy traditional Catholic wedding with hundreds of guests.

Naturally, wedding planning brings lots of laughs as hijinks and arguments ensue. The white, Instagram-obsessed, credential-less wedding planner they hire draws laughs as she struggles to connect with the Cuban-American family. But the clash between Billy and Adan’s father is even funnier and provides a nuanced depiction of two Latinx cultures. The way the film incorporates Cuban-American culture speaks to how representation often works best when someone who is a part of the community being depicted is involved in its creation. “Father of the Bride” doesn’t rely on stereotypes but brings in elements of a specific Latinx culture.

García and Estefan are the perfect couple to have at the film’s helm. García, in particular, is able to ensure that Billy remains sympathetic even when his actions might be frustrating. No one may be allowed to provide a powerful performance, but all cast members are serviceable for their respective roles.

“Father of the Bride” is better constructed than many other direct-to-streaming films, with all the gleam of a theatrically released rom-com, and with it comes some familiar tropes of the genre as well. One of the sweetest plot lines revolves around Sofia asking Cora to design her wedding dress and her sister trying to use it as a way to prove to her father that it’s a viable career option. As you might expect for a film with a fashion designer character, the film has some fantastic costumes by Caroline Eselin. But rather frustratingly, the film won’t commit to the queer romance it hints at for Cora.

While this year’s “Father of the Bride” might not be as humorous as the 1991 film, it contains more heart. Billy’s reluctance for his eldest daughter to move to another country, regardless of the marriage, is endearing and will easily hook an audience into what is already a familiar story. The way the film portrays the relationships between the first and second-generation Americans gives this “Father of the Bride” more weight than in previous versions.