“SORRY WE MISSED YOU” 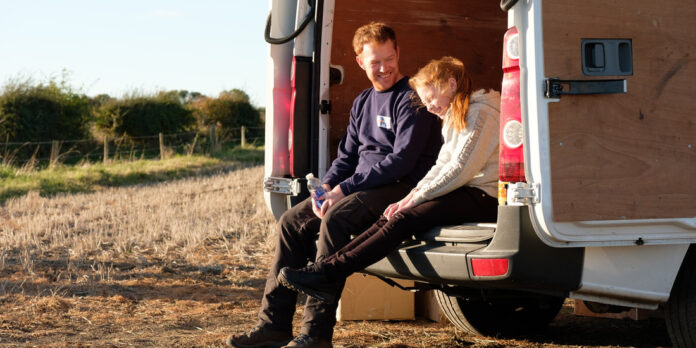 THE STORY – Ricky and his family have been fighting an uphill struggle against debt since the 2008 financial crash. An opportunity to wrestle back some independence appears with a shiny new van and the chance to run a franchise as a self-employed delivery driver. It’s hard work, and his wife’s job as a carer is no easier. The family unit is strong but when both are pulled in different directions everything comes to breaking point.
​
THE CAST – Kris Hitchen, Debbie Honeywood, Rhys Stone & Katie Proctor
​
THE TEAM – Ken Loach (Director) & Paul Laverty (Writer)
​
THE RUNNING TIME – 100 Minutes

​It’s hard to believe that British director Ken Loach is 83-years-old and still delivering such strong and reflective cinematic statements such as “I, Daniel Blake” and “Sorry We Missed You.” Loach’s films are almost always a grueling watch and a truly eye-opening experience. He will often deliver a gut-wrenching punch to the soul that leaves the viewer in floods of tears as the credits roll. Loach’s films may not be the easiest to watch in terms of their entertainment value, but they are just as vital to the cinematic landscape as, say, a Marvel film. Sometimes, we need to be reminded that there is a harsh reality waiting for many outside the theatre doors, and while it’s all very well escaping into a world of caped crusaders for two hours, one has to also be aware of the struggles that many ordinary people are facing in our current political climate.

“Sorry We Missed You” opens with Ricky (Kris Hitchen) being interviewed for a new role that sounds almost too good to be true. He believes that being hired as a self-employed deliveryman, where he gets to determine his own working hours, will be the solution to his debt problems. His wife Abby (Debbie Honeywood) is a carer who is also on a zero-hour contract, where she rushes around trying to attend to as many patients as she possibly can. In order to put a deposit down on a white van, Ricky persuades Abby to sell her car, which only adds to her woes.

The couple is also facing issues with their children, mostly their eldest son Seb (Rhys Stone) who keeps getting in trouble with the police and his school. Their youngest child Lisa Jane (Katie Proctor) seems to be responsible enough, often coming back to an empty house to microwave her dinner and put herself to bed, but she’s also cracking up under the stress. The combination of Seb’s increasingly bad behavior and the pressures of Abby’s job leads to Ricky struggling to complete his deliveries on schedule – every delay costs him money; and as the packages begin to pile up, the family reaches the ultimate breaking point.

There’s much to admire here with “Sorry We Missed You” and given the current socio-economic climate in the United Kingdom, the film feels very timely. The concept of the zero-hour contract is very controversial in the U.K., and while these types of contracts may be suitable for some of the workforce, many who object to the zero-hour contracts have pointed out the restraints that these types of contracts have on working families. Certainly, the events depicted in Paul Laverty’s screenplay have some basis in fact, as he spoke to many working-class families who are stuck living in rented properties, unable to get onto the property ladder, and are tied into zero-hour contracts. Laverty even went out on deliveries with some of the drivers he spoke to while he was conducting his research for the screenplay, and we can see the level of care he takes to depict their experiences.

The film’s main performances are equally noteworthy, especially when we consider that the majority of the cast are not classically trained, which adds another layer to the film’s realism. Hitchen’s Ricky is full of optimism at the start of the film, standing up straight and with a spring in his step, but as the film’s narrative develops, he almost shrinks in size, becoming a shell of his former self. We fully believe that this is a man who is on the brink of exhaustion, and for anyone who has witnessed someone close to them become crippled under their responsibility and the stress of their job, it makes for hard-hitting drama. Honeywood manages to deliver such a sincere and wholehearted performance as Abby, a woman with a big heart who cares, not only for the welfare of her family but those who she cares for as part of her job. Sadly, the film doesn’t dedicate enough time for her story, and we never really reach a firm conclusion of what lies in store for the couple’s relationship.

“Sorry We Missed You” isn’t without its moments of joy. There is comedy sprinkled in with the tragedy, and there are some very comedic lines of dialogue, especially those exchanged between Ricky and his “boss” Maloney (Ross Brewster). There are touching intimate moments shared between the family, where we see them eating curry and laughing together, and a beautifully tender scene of father/daughter bonding as Ricky and Lisa Jane share a sandwich together in the back of the van. Small moments of bliss in the midst of all the chaos.

The film feels a little stark and bleak in terms of its visuals, with the cinematography by Robbie Ryan capturing the grey, urban sprawl that is Newcastle, a city in the North of England that has had a long, troubled history. The Newcastle dialect may prove to be too hard for those outside the U.K. to understand, and perhaps this will hinder the film’s success. Still, one has to marvel at Ken Loach’s dedication to social-realist storytelling, and his dedication to bringing these all-too-real stories to the big screen. “Sorry We Missed You” isn’t an easy watch but it’s a necessary one.