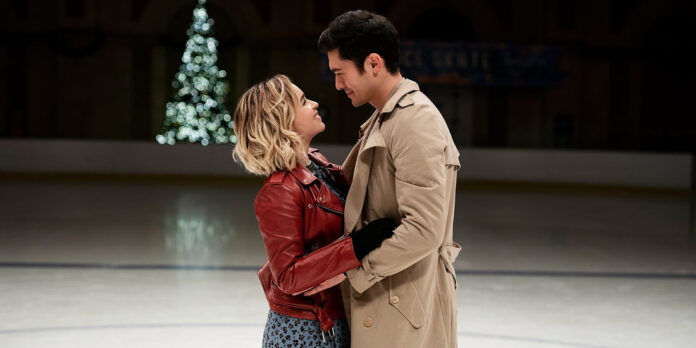 THE STORY – A young woman, who has been continuously unlucky, accepts a job as a department store elf during the holidays. When Kate meets Tom on the job, her life takes a turn.

​​​“Last Christmas, I gave you my heart, and the very next day, you gave it away.”

In this, the Golden Age of Hallmark Christmas movies, it’s a bit shocking it took us this long to get a movie based on that famous George Michael lyric. The good news is, thanks to some biting humor, charming atmosphere, and a wonderful performance from Emilia Clarke, this is far more than a Hallmark Christmas movie. The bad news is that “Last Christmas” doesn’t have much in the way of a story outside of that one lyric. It all adds up to an odd little film that kind of works and kind of doesn’t.

Clarke stars as Kate, a pretty standard sad sack who can’t get her life together. Her real name is Katerina, but she’s somewhat ashamed of her Yugoslavian roots, so she doesn’t go by that anymore. Kate works in a year-round Christmas shop, surrounded by joy each and every day. Naturally, that joy hasn’t quite rubbed off on her. The film sets Kate up quickly as someone naturally grating, crashing on friends’ apartments until they can’t stand her (or until she kills their fish). It’s funny, and largely thanks to Clarke’s brilliant casting. She manages to be a lot while still remaining charming. It’s a balancing act that she nails perfectly.

Kate soon meets a strangely nice man named Tom (Henry Golding) outside the shop, and they keep running into each other. It would be a classic meet-cute if Tom wasn’t such a weirdo. To Golding’s credit, he’s played like a typical charming character, but written like an oddly perfect person who doesn’t have a phone and likes to take strange women down creepy alleys. Kate asks, “Has anyone ever told you there’s something serial killer-y about you?” It’s odd, but the tonal charm of the film never goes away. This strange combination of character traits never feels quite right though. We know right from the start that there’s something up with his character, so we’re anticipating a twist the entire time.

The biggest issue with this film is that there’s not really a plot here. There’s nothing that Kate wants or needs to accomplish, no goal, nothing to strive for. She’s someone who needs to stop being such a bum to the people in her life, but that’s about it. The film meanders, with things happening to Kate, but there’s no motivation within her that we can root for. Halfway through this film, after all the setup is out of the way, I realized I had no clue what we, the audience, were supposed to want. Kate is simply going through her days, going to work, reacting as things happen to her, but never pursuing anything.

While there’s no plot to keep pushing things forward, much of the supporting cast get their own moments to shine. Michelle Yeoh plays Santa, the grumpy Christmas store owner who turns into mush when her crush walks in. Rarely does Yeoh get to play comedy like this, and she’s clearly enjoying it. Elsewhere, Emma Thompson (who also co-wrote the film) scores some laughs as Kate’s very Eastern European mother. She’s overbearing but cares for her daughter.

Two scenes in the film are centered around Brexit and general anti-immigrant sentiment in London. They’re an admirable rebuke of those ideas, but play no actual role in the plot, and thus feel tacked on without thematic purpose. They’re random, adding to the overall oddness of the movie. There’s also no reason, outside of basing this on the George Michael lyric, for this movie to be a Christmas film. Other than Kate working in a Christmas shop, the holidays don’t really play any role in the overall plot. There’s no Christmas spirit, no cheer or charm. There are barely any Christmas songs here either since the soundtrack is made up of George Michael tunes. If you’re looking for a new holiday favorite, you’ve come to the wrong spot.

“Last Christmas” is a disappointing film, though it’s not without its bright moments. Despite a few solid laughs and a couple of iconic Emma Thompson line readings, it’s not enough to make this odd-sort of-not really-kind of holiday film worthwhile.