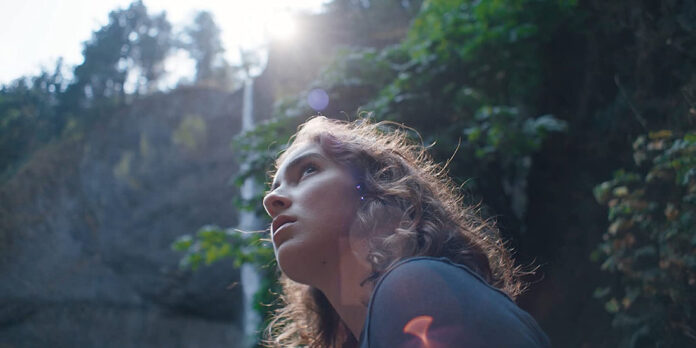 THE STORY – After her mother’s death, 16-year-old Sophie Jones is trying everything she can to feel something again, and make it through high school.

3/31/2020
​By Sara Clements
​
​For 15 years, director Jessie Barr never spoke about her father’s death. It wasn’t until she began directing her first feature film, “Sophie Jones,” that she found the strength to do so. The director co-wrote the film with her cousin of the same name, Jessica Barr, who also plays the titular character. The film is inspired by Jessica’s experience of grieving the loss of her mother. The cousins both lost a parent to cancer at the age of 16, and by the film’s star opening up about her experience, it led the director finally being able to do the same. It’s a creation of catharsis; one that is a raw and personal exploration of grief and coming-of-age.

The film opens with Jessica Barr’s titular Sophie smelling her deceased mother’s clothes, taking her ashes in her hands, and putting some on the tip of her tongue in an attempt to make her mother feel close again. The scene quickly shifts to one where Sophie is on a date and pretending like everything’s okay. She’s navigating high school with a false veneer of normalcy, suggesting throwing a party for the rest of her theatre group before her family’s flowers of condolence have even begun to wilt. Sophie’s coping mechanism involves a lot of socialization and boys. This time of grief comes when the teenager is also discovering her sexual agency, and she uses it to feel alive and to try to forget about her mother’s death. A film that talks about sex and masturbation so casually is always especially refreshing, but Sophie’s flings don’t last; not taking time to process her grief has complications. Not only does she get irritable and snap at those who are just trying to help her, like her best friend, she also ends it with a boy when it gets too serious. She’s seemingly scared of that intimacy that leads to love, perhaps out of fear of losing someone else. The film demonstrates how complicated an emotion grief is and how everyone deals with it differently. Sophie acts like she’s over it, but there are moments of pain that pass over her eyes, a pain that only someone like Barr could convey in such an affecting form. She breaks down.

“Things have been weird,” Sophie says. “Death is weird.” Death is a bleak subject that permeates the film, but the cinematography by Scott Miller creates a surprisingly bright environment; one where the sun is always shining, and the skies are always blue. This is complemented by an upbeat and electronic score by Nate Heller (composer for “A Beautiful Day in the Neighborhood,” “Can You Ever Forgive Me?” and “The Diary of a Teenage Girl”). Blue is the primary color used throughout the film. As director Jessie Barr explained to me over message, she saw water as a big element for Sophie as it represents her moodiness and grief. “Powerful, all-encompassing, can drown or buoy,” she writes. The color blue also has a link to the film’s setting and filming location, Portland, Oregon. Portland has water everywhere; accustomed to rain, fog, and has countless waterfalls. This much water adds, as Barr explains, a “denseness to the air and an oppressiveness.” But the water, as does the color blue, adds “richness and beauty” to the film, and nature is used as a way for Sophie to feel connected to her mother.

“Sophie Jones” has an authenticity that can only be seen in art as intimate as this. It’s about an individual and a family learning to overcome loss and learn to open up. The film illustrates the importance of connecting to people who can relate during dark times like these. It’s a film that’s humorous, melancholy yet joyous. There’s a beautiful scene where Sophie’s sister takes a bath in the flowers gifted to them in condolence, while Sophie takes pictures. It has many somber yet delightful scenes like this, creating a film that feels like a celebration of life – as death should be.
“Sophie Jones” is one of many independent films whose premiere had to be canceled due to coronavirus concerns. The premiere was slated for the Portland International Film Festival and the film was also set to screen at VAIL 2020 which was also canceled. If you would like to support Jessie Barr and her film, share connections, and resources that would help the film get distribution, you can visit the “Sophie Jones” website, Twitter, and Instagram.