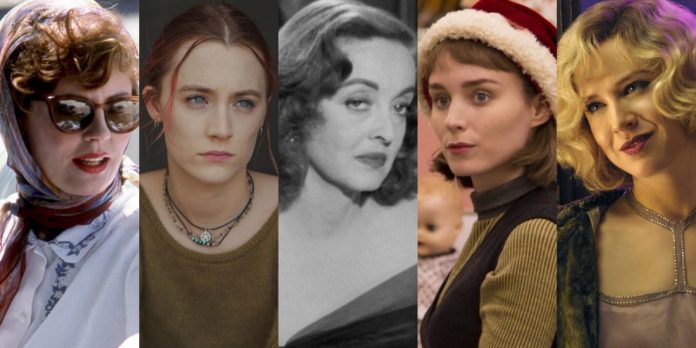 By Lauren LaMagna
​
As March nears a close, with an international pandemic and the film industry coming to a sudden halt, as well as with the rest of the major cities around the world, it can be hard to take your mind off of these crazy events. But March, no matter the events, is still Women’s History Month and can be perfectly celebrated by watching your favorite female-centric films during self-isolation. I asked the Next Best Picture staff to list some of their favorites. In no particular order, here are some of Next Best Picture’s favorite female-centric films.

When one thinks about iconic women’s pictures, “All About Eve” is one of the first that comes to mind. The 1950 film starring Bette Davis as Margo Channing, the Broadway star, and Anne Baxter as Eve Harrington, the young fan who threatens Margo’s career, is simply spectacular. It shows two great actresses going head to head and continues to entertain decades after its initial release. It’s no wonder that “All About Eve” holds six Oscars and ties the record for most Oscar nominations with 14. (The power of women!)

Completely beautiful, thought-provoking, and terrifying from start to finish, “Black Swan” is another film that’s defined the latest decade of cinema. Helmed by a fantastic Oscar-winning performance from Natalie Portman, “Black Swan” brings its audience on a crazy ride as Nina loses herself in order to become the perfect ballerina in her company’s production of “Swan Lake”. From director Darren Aronofsky, “Black Swan” is one of the best psychological thrillers out there.

​Todd Haynes’ adaption of Patricia Highsmith’s novel is nothing short of specular. Set in 1950s New York, a young sales clerk meets a married woman who shows her infinite possibilities. Led by Rooney Mara and Cate Blanchett – in arguably career-best performances – with support from Sarah Paulson, “Carol” is a love story, a beautiful period piece, but also a film that focuses on female pleasure in every aspect.

The Best Picture winner that everyone saw coming. Based on the 1975 Broadway sensation, “Chicago” follows Roxie Hart (Renée Zellweger), a young woman desperate to be a star who quickly finds herself on trial for murder. Roxie, along with her other female inmates, use the media and their manipulative ways to sway their trails – with the occasional song and dance of course. With amazing performances from Zellweger, Queen Latifah, and Catherine Zeta-Jones in her Oscar-winning role as Velma Kelly, “Chicago” is a feminist knock-out; but just remember: they both reached for the gun.

If there’s one thing you can count on, it’s Yorgos Lanthimos making peculiar masterpieces, and “The Favourite” is no exception. Based on the lives of Queen Anne, Lady Sarah Churchill and Abigail Hill, “The Favourite” is a stunning yet odd film about women fighting for control. During its initial 2018 release, it was compared to “All About Eve” due to its depiction and portrayal of female rivalry. With three complex female characters taking center stage, played by Olivia Colman in her Oscar-winning role, Rachel Weisz and Emma Stone, “The Favourite” is ridiculous, captivating, and perfect at the same time.

Written by Noah Baumbach and Greta Gerwig, “Frances Ha” tells the honest story of an aspiring dancer who must deal with turning 30 and the societal pressures that come with it. Lead by Greta Gerwig in the staring role, “Frances Ha” is light-hearted but brutally candid and portrays a great depiction of female friendship that everyone should witness. ​

It’s impossible to not include “Lady Bird” on this list. The 2017 film from Greta Gerwig tells the story of Christine, aka Lady Bird, during her senior year in high school. The honest coming-of-age story perfectly captures how confusing it is to be 18, with the craving for independence and the terrifying realization of everything changing once you achieve that. With stellar performances from Saoirse Ronan, Laurie Metcalf and Beanie Feldstein, “Lady Bird” is easily a film that defined the decade.

While any version of “Little Women” could have easily made our list, Gerwig’s 2019 retelling is the one that makes it today. Remaking a classic film(s) that’s based on a classic piece of literature isn’t the safest route for a post-Oscar nominated project, but nothing can stop Gerwig. In her version, Gerwig tells the March sisters’ story with a modern feminist lens which allows a modern audience to see these beloved characters in a whole new light. Whether you’re a Jo, Meg, Amy, or Beth, “Little Women” will make you smile from ear to ear and wipe a few tears away when the ending credits roll.

Portrait Of A Lady On Fire

Coming off the 2019 awards season, “Portrait of a Lady on Fire” continues to take the world by storm. Céline Sciamma’s latest film tells the beautiful and sensual love story of Marianne and Heloïse. But instead of showing the two characters fall in love in a voyeuristic way, Sciamma allows her audience to fall in love with the characters as they fall in love with each other. With impeccable performances from Noémie Merlant and Adèle Haenel, “Portrait of a Lady on Fire” is a must-see.

A classic for a reason, Ridley Scott’s “Thelma & Louise” took the world by storm in 1991 and hasn’t let go since. The film follows best friends Thelma (Geena Davis) and Louise (Susan Sarandon) who decide to take a girls’ trip and quickly end up as wanted women. Led by a great duo, “Thelma & Louise” is a great female-led adventure story with heart and soul that shows just how powerful women can be together.

Have you seen all of the films on this list? What are some of your favorite female-centric movies? Let us know your thoughts in the comments section below or on our Twitter account.