“NEWS OF THE WORLD” 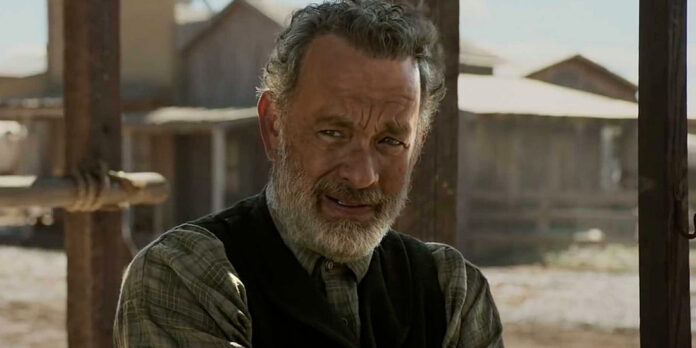 THE STORY – Five years after the end of the Civil War, Capt. Jefferson Kyle Kidd crosses paths with a 10-year-old girl taken by the Kiowa people. Forced to return to her aunt and uncle, Kidd agrees to escort the child across the harsh and unforgiving plains of Texas. However, the long journey soon turns into a fight for survival as the traveling companions encounter danger at every turn — both human and natural.

Tom Hanks has had a roller coaster of a year. After becoming one of the first celebrities to contract the deadly coronavirus (along with his wife Rita), he has had a streaming release for “Greyhound” along with a brief cameo in “Borat Subsequent Moviefilm.” He now leads a large studio film, re-teaming with his “Captain Phillips” director Paul Greengrass in “News Of The World.” And this is all coming after his 2019, where he was nominated for his sixth Academy Award for playing Mister Rogers in “A Beautiful Day In The Neighborhood” and once again voicing the beloved Woody in the Academy Award winner for Best Animated Feature, “Toy Story 4.” Could his latest bring him Oscar success once again? All of the pieces are in place for this humanistic western to be a strong awards contender and win over our hearts in a way few films do in this genre.

Taking place in North Texas in 1870 (five years after the Civil War), Captain Jefferson Kyle Kidd’s (Tom Hanks) job is to travel from town to town and read the news to people. He’s a gifted storyteller (when Tom Hanks speaks – we listen) who is a good man and trying his best in a post-war world. One day he comes across an attacked carriage and discovers a young girl named Johanna (Helena Zengel), who only speaks German. She was taken from her family by the Kiowa people, and now, she becomes his responsibility because the story has established that he’s a good man and will not leave her behind. The two set out to travel hundreds of miles from town to town, discovering new information about one another and running into dangers along the way as they each try to make it back home.

Paul Greengrass is an action director known for his work on the Jason Bourne franchise and his before mentioned “Captain Phillips,” which was nominated for Best Picture. Since he was able to direct Tom Hanks to one of his best performances ever in that film, it’s fair to say that expectations were high for “News Of The World.” Shockingly, this film is unlike most of the other movies contained with Greengrass’s filmography. The shaky handheld camerawork by once frequent cinematographer collaborator, Barry Ackroyd, has been replaced by Dariusz Wolski’s sweeping vistas, striking use of lighting and steady composition. It’s a gorgeous looking film, primarily because another Greengrass trademark, rapid-fire editing, is also noticeably absent from “News Of The World,” allowing us to soak in the visuals which he and Wolski are providing us on screen. The unforgettable soundscape of the film may be its best asset overall. There are frequent gun battles, various crowd scenes, rainy nights and violent sandstorms, all of which allow Greengrass and his sound team to thoroughly immerse us in several set pieces that are sprinkled throughout the narrative of Kidd trying to get Johanna back to her family. All of this is backed by an at times haunting and other times delicately beautiful score by eight-time Oscar nominee James Newton Howard.

So, with all of these masterful elements and a reliable Tom Hanks leading the way, why doesn’t the film exceed expectations? Part of the reason is Tom Hanks himself. Although he’s, as we already know, an inherently good man playing an inherently good man, the character does not grant him an opportunity to show a new side to him that we’re not already familiar with, nor does it call upon him to dig deep and deliver something truly memorable. It’s merely your typical Tom Hanks performance, which is still a good thing, just not a great thing. And when compared with his transformative work last year in “A Beautiful Day In The Neighborhood” or his emotionally vulnerable work in “Captain Phillips,” his latest effort in “News Of The World” can’t help but look weaker by comparison. While American audiences may not be familiar with Helena Zengel as much as international audiences, her work here is mysterious, strong and perfectly matched up with Hanks’s more measured work. She proves to be a captivating on-screen presence despite the fact she’s mostly mute for a large portion of the film due to a language barrier between her and Kidd. However, (and I know I’m not the first to make this comparison), Hailee Steinfeld in “True Grit,” this is not. The story may structurally feel like a similar take on that classic western story, but both characters never stack up to the work by Jeff Bridges and Hailee Steinfeld in that film.

The story of “News Of The World” also leaves a lot to be desired. What should have been a powerful allegory for our “fake news” society of today is instead more focused on getting to the next major setpiece. By the time the action has calmed down and the film’s runtime is almost out, it’s in the third act that there’s a last-minute attempt to inject some emotional backstory into Jefferson Kyle Kidd. Tom Hanks does everything he can to sell it and while it may be moving to some, others will find the storytelling structure by Greengrass and co-writer Garth Davies (“Lion“) to be uneven and too little too late. Ray McKinnon (“Ford v Ferrari“), Elizabeth Marvel (“The Meyerowitz Stories“), Michael Covino (“The Climb“) and Bill Camp (“Dark Waters“) all show up for one section of the movie apiece. Still, none are ever given enough breathing room to make their performances stand out.

“News Of The World” should’ve been great. It’s still good, but with this much talent involved and a story that had thematically powerful ties to today’s society, this should’ve been an all-timer. Instead, Greengrass gives us his most un-Greengrass film yet. While for some, that will be good enough (and in some cases, refreshing) and I have no doubt that others will be emotionally moved by Tom Hanks’ performance and the storytelling, I was left mostly disappointed. I will not take anything away from the crafts in this film though, as it looks and sounds exemplary. However, uneven storytelling, a lack of excitement around the characters, and a few unfortunate inevitable comparisons to superior past work holds this one back just a bit for me from a more enthusiastic recommendation. I still suggest you see it and you’re probably already planning on doing so anyway but news of this one will travel throughout the world fast.