“SHADOW IN THE CLOUD” 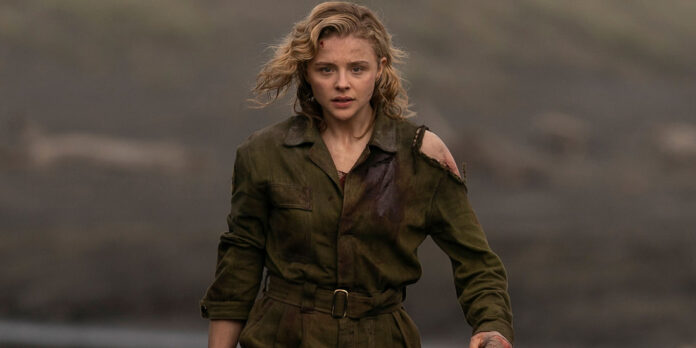 THE STORY – While traveling with top-secret documents on a B-17 Flying Fortress, a female WWII pilot encounters an evil presence on board.

​​​​​​​Mashups are, for me, one of the most interesting subgenres of film, often creating a fresh look at each genre as they are forced to work together. When I first heard the premise of “Shadow in the Cloud,” the latest film by New Zealander Roseanne Liang, I thought the idea of a monster movie set in the confines of a B-17 bomber during World War II sounded irresistible. Now that I’ve seen the finished product, I have to say that “Shadow in the Cloud” is entirely resistible.

Liang sets the stage by including an Allied Air Force training cartoon warning of the potential damage that could be caused by gremlins, a delightful foreshadowing of the fun that lies ahead – fun that never really materializes. Enter Flight Officer Maude Garrett (Chloë Grace Moretz, whose performance is the best element of the film) who is carrying a piece of cargo as she hitches a ride on a B-17 Flying Fortress. Her presence is widely derided by most of the misogynistic crew, with only dreamboat Staff Sgt. Walter Quaid (Taylor John Smith) taking her side and offering to protect her cargo, as she is banished to fly in the hold of the plane (Because…you know…she’s (ugh) a girl).

Once there, she looks out of the window and spies one of those nasty gremlins attached to the wing of the plane. When it becomes clear that the monster has every intention of getting inside the plane, she desperately tries to warn that crew above as to what is happening outside, which, of course, they laughingly dismiss until it’s too late.

One thing I can give credit to “Shadow in the Cloud” for is that it’s short, as Liang has brought it in at a trim 83 minutes. The set-up is properly handled quickly, and once the action starts, it doesn’t let up. But the dialogue by Liang, and accused sexual abuser Max Landis, is lame and serves only as a time-killer before the gremlin begins to do its dirty work. Most of the character actors playing the crew members aren’t given the material to stretch their characters beyond run-of-the-mill sexists, and Smith, as the love interest, is particularly stiff.​

It’s up to Moretz to carry this whole enterprise on her shoulders, which she manages to do but just barely. She has done action films before – her breakthrough at age 13 was the appropriately titled “Kick-Ass” – and here, at the ripe old age of 23, she shows that she hasn’t lost those skills. As the action begins, she’s the character for whom we root, and Moretz doesn’t disappoint. If only “Shadow in the Cloud” was as good as she is.